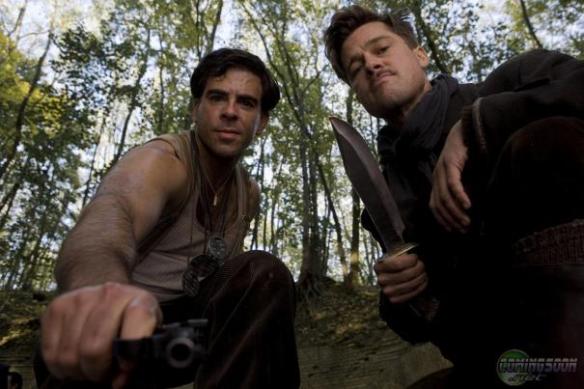 If you're a Nazi, these gentlemen would like a word with you.

Once upon a time in Nazi-occupied France, a rural dairy farm is visited by Colonel Hans Landa (Waltz), the notorious “Jew Hunter.” The SS officer is notorious for his ability to capture those who had escaped the round-up of Jews in France but had been unable to escape Nazi territory. The farmer LaPadite (Menochet) nervously smokes his pipe and answers general questions about Jewish farmers living in the district. Waltz is charming and polite; he insists on speaking English, which he knows LaPadite speaks fluently and is better than his French. The longer the interrogation goes on, the more nervous LaPadite gets until at last he gives up the Jewish family hiding below the floorboards. Still speaking English and aware that the family below doesn’t speak the language Landa orders his men to fire their machine guns into the floor. The entire family is massacred with the exception of the teenaged daughter Shoshanna (Laurent) who manages to flee into the nearby forest, the derisive cries of “Au revoir, Shoshanna” that Landa calls out pleasantly at the running girl echoing in her ears.

So starts the latest Quentin Tarantino movie, and it is everything you would expect from the acclaimed director. Lt. Aldo Raine (Pitt) is in charge of eight Jewish-American soldiers who have been parachuted into Vichy France ahead of the invasion at Normandy to strike fear and terror into the hearts of the Nazi occupiers. Raine’s orders are to kill Nazi soldiers as brutally as possible; to take their scalps and essentially act as the boogeyman, the stuff of nightmares to the German troops. Of particular note are his Basterds Donnie Donowitz (Roth) a.k.a. The Jew Bear, known for beating Nazis to death with a baseball bat and Hugo Stiglitz (Schweiger), a German soldier who had murdered several Gestapo officers and was set to be sent to Berlin to be executed before the Basterds rescued him.

Shoshanna in the meantime has made it to Paris, and is going by the name Mimieux, the owner of a small cinema. She attracts the attention of Fredrick Zoller (Bruhl), a sniper who had become a hero to the Fatherland for killing over 200 American soldiers in Italy. Joseph Goebbels (Groth) has become enamored of the handsome young soldier and has produced a film about Zoller called A Nation’s Pride with Zoller cast as himself. Goebbels has plans for a gala premiere in Paris, but Zoller insists on having the premiere at Shoshanna’s cinema. After a private screening, Goebbels agrees. Shoshanna realizes that the entire hierarchy of the Nazi party will be in her theater at one time, and makes plans to burn the place to the ground with the Nazis inside it.

The Basterds, as Raine’s troupe are called, are also aware of the premiere and Allied command, anxious to strike a death blow to the Nazi regime, fly in a British officer named Archie Hicox (Fassbender) to infiltrate the premiere and plant explosive devices. Their contact is the famous German actress Bridget von Hammersmark (Kruger) who meets them in the cellar of a French tavern but their cover is blown and a shootout ensues, killing almost everyone in the tavern. Now, Raine has to think of a means of getting in and blowing up the theater, and with Landa sniffing on their heels, the task won’t be an easy one but they’re the Basterds and easy isn’t part of the job description.

First things first; this is to war films what Pulp Fiction is to crime movies. Tarantino may be the best writer in movies right now, and once again he comes up with a thoroughly entertaining script filled with fascinating characters. In fact, Landa may be the best movie villain to come along since Auric Goldfinger (sorry to all you Joker fans from The Dark Knight but Landa is far more complex, believable and consequently more terrifying than Heath Ledger’s Joker). Waltz will almost certainly be up for Oscar consideration come next spring; his performance is by far one of the year’s best.

Pitt, surprisingly, really isn’t the main character. He’s onscreen plenty, sure but Waltz, Kruger and Laurent are onscreen as much if not more. This, like most Tarantino movies, is definitely an ensemble piece and as usual, Tarantino has put together a hell of an ensemble. Every role is cast perfectly, with unknowns or lesser known names. Even Rod Taylor, long retired, came out for a two-line role as Winston Churchill.

As usual, there are plenty of B-movie references, enough to keep pimple-faced fanboys (and girls) positively giddy while they dredge IMDB for every name and reference. I won’t say that there isn’t a certain amount of amusement in those kinds of things, but for me I’ve gotta say I prefer the movie to the research. The movie is well plotted and a roller coaster ride, with excessive violence and a sly sense of humor.

That really is the rub. It’s a typical Tarantino film in that sense, but because of Hans Landa, it’s elevated. Landa is the most vicious yet charming villain Tarantino has ever written; Waltz elevates the role so that it dominates the movie, more so than any other role has dominated any other Tarantino movie. Waltz’s performance is the main reason to plunk down the ten bucks to see this, although any Tarantino movie is worth the price of admission, even his less successful films (like Jackie Brown).

This is a loud, brash war movie that turns all war movie conventions on their ear, re-writing history and cinematic rules as it goes along. Those who are sticklers for history shouldn’t see this – or if you do, think of this as taking place in a parallel universe. You can almost hear Tarantino chuckling to himself as he directs this. In any case, this is the kind of movie that is why you go to the movies in the first place; a fun ride that takes your mind off of your problems for a couple of hours, and then is the subject of discussion with your friends and family for days afterwards. It’s also the kind of movie that you’ll want to see again and again, and it will get better every time you see it. That’s truly the mark of a great movie.

REASONS TO GO: The performance of Christoph Waltz is Oscar-worthy and one of the best villainous portrayals ever. Hey, it’s a Tarantino movie – what more do you need to know?

REASONS TO STAY: There’s a whole lot of violence, some of it truly sickening. Sticklers for historical accuracy will be aghast.

FAMILY VALUES: Brutal, sickening violence and rough language – this is a movie meant for adults. Get a sitter for this one.

TRIVIAL PURSUIT: Although this was their first time working together, Brad Pitt co-starred in True Romance, one of the first movies to be penned by Tarantino.

HOME OR THEATER: You won’t want to wait for it to come out on DVD/Blu-Ray to see this.