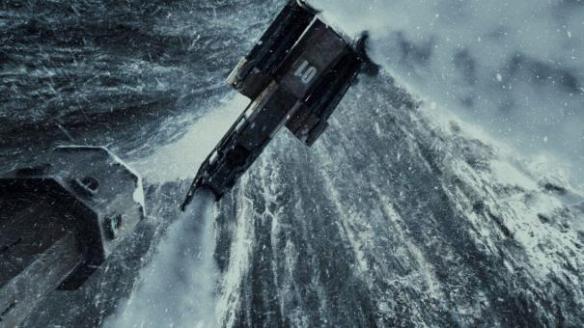 The future is not a very nice place. The resources of our planet have all but been exhausted by the 28th century. No longer a planet divided into nations, the world is ruled by mega-corporations. There are only four left, more or less divided into geographical territories, and they fight over the scraps that Mother Earth has left.

One such battle takes place in Eastern Europe, where a strange seal is uncovered in the Earth. A stray shell cracks the seal and inadvertently re-activates a massive machine that has been dormant for thousands of years.

In the distant past, the machine had come from outer space without explanation and began mutating the human population into homicidal creatures whose sole purpose was to kill, or capture the remaining humans for mutation. An ancient hero managed to overcome the mutants and seal the machine in the depths of the earth, leaving behind a document that has been unknown to the general population but guarded by a group of monks who revere the Chronicles as scripture.

The mutant outbreak gets to be overwhelming – the corporate armies can’t withstand the onslaught of the mutants, whose arms have become deadly bone-blades. Major Mitch Hunter’s (Jane) unit barely survives – they wouldn’t have without the sacrifice of Mitch’s friend and mentor Nathan Rooker (Pertwee). The decision by the Earth’s erstwhile political leader Constantine (Malkovich) is to evacuate as much of the remaining people on Earth off-world to Mars. Unfortunately, there aren’t nearly enough transports to evacuate everyone on time and massive panic erupts, with the accompanying studies in humanity’s baser emotions.

However, Brother Samuel (Perlman), one of the last remaining members of the Order that has guarded the Chronicles for so long, has a plan. He will lead a team into the Machine itself and plant there a weapon left behind that the Chronicle says will end the threat of the Mutants and the Machine forever.

An elite team of commandos from all four corporations are assembled, led by Major Hunter. His team includes the arrogant, elitist Lt. von Steiner (Furmann), the silent but deadly swordsman Severian (Walton), the easy-going Cpl. De Barrera (Echegaray) and the beautiful Cpl. Duval (Aoki). Together with Brother Samuel they journey to the location of the Machine, but quickly discover that even the skies aren’t safe from the rapidly evolving mutants. Can these few stand against the vast hordes of Mutants taking over our planet?

Hunter has crafted a visually arresting movie. There’s an excess of carnage – the Mutants kill with bladed arms, slicing and dicing a swath through the film’s endless supply of extras. The look has been described as “World War I meets Steampunk” and that’s quite accurate. It begs a few questions – how does a civilization that has the capability of off-world colonies rely so heavily on steam-powered vehicles that have gauges and valves instead of digital readouts and computers. And of course, the usual Hollywood bugaboo – if there is an ancient weapon capable of destroying the unbeatable foe, why wasn’t it used the first time out?

The cast is pretty impressive for an independent action movie. Perlman plays a character more akin to the Beast than to Hellboy (remember his work on the TV series “Beauty and the Beast”?). Jane, who has starred in such movies as Punisher and The Mist, is one of those actors who don’t seem to get the respect he deserves. His heroic Hunter tosses off one-liners that would do Schwarzenegger proud, and has the charisma to be a leading action star. Malkovich, who is only in a couple of scenes here, is typical Malkovich for his role. Aoki is, like Jane, an incomprehensibly underrated actress who doesn’t get the attention she should be getting.

The real star here however is production designer Caroline Greville-Morris. Her task was to create a society that is crumbling, advanced and yet without the resources to sustain it. Something tells me that she was given the directive to make it look deliberately like First World War trench warfare in the initial battle scenes, and it does, down to the uniforms of the corporate soldiers.

There is some CGI here, but it isn’t the centerpiece of the movie, which is amazing considering the subject matter. The mutants make excellent monsters, and their relentless, unremorseful bloodlust and rage are completely credible. I’m not that familiar with the pen-and-paper RPG that this is based on, but I’m assured it’s fairly faithful to the storyline of the game.

I didn’t expect to like The Mutant Chronicles as much as I did. This movie has been around since last year (it’s already seen release in Europe for nearly a year) but the producers have had difficulty securing an American distributor. Normally that sets off alarm bells in this critic’s brain. After finally cutting a deal with Mark Cuban’s Magnolia Releasing, Cuban made the odd decision to air the movie first on his HDNet cable channel before its theatrical release (which unfortunately has been limited to New York and Los Angeles). That’s a shame, because despite all its logical flaws, it is a highly entertaining sci-fi war film. I’d characterize it as The Dirty Dozen if written by John Carpenter and directed by George Romero. That’s pretty high praise in my book. In any case, if you get an opportunity to see it in a theater, or on HDNet, or eventually on DVD/Blu-Ray, by all means do so – you won’t regret it.

WHY RENT THIS: The WWI meets Steampunk production design is visually arresting. Fine performances by the leads, particularly the underrated Jane, are unexpectedly welcome. Truly menacing villains and some excellent battle sequences make this an exciting sci-fi war film.

WHY RENT SOMETHING ELSE: The story has some severe logical flaws that at times take you out of the movie’s world. The carnage can get brain-numbing after awhile.

FAMILY VALUES: Plenty of carnage and foul language. The mutants are so unnerving that they’ll give younger viewers nightmares for weeks. Okay for older or more mature teens.

NOTABLE DVD EXTRAS: An HD-Net making-of documentary, footage of the movie’s Comic-Con panel and a seven-minute teaser made by director Hunter to generate buzz and illustrate to his cast and crew what kind of mood he was looking for.