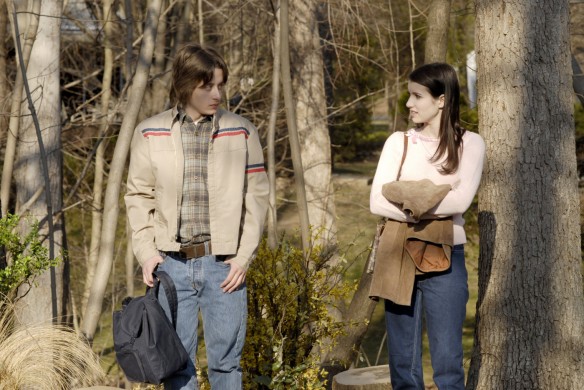 Rory Culkin and Emma Roberts discuss the pitfalls of having relatives more famous than themselves.

As a species, we tend to show a different face to the public than we wear in private. Beneath the façade of even the most tranquil and affluent lives there is often a turbulent miasma of a different life, one not easy to spot from the surface. Sometimes that other life can rear its ugly head and take over every facet of our lives.

Long Island in 1979 was an idyllic place to grow up, especially if your father is a successful developer. For Scott Bartlett (Rory Culkin), his father Mickey (Baldwin) is just that. Scott idolizes his dad, but has little more than contempt for his mom (Hennessy), whom he considers a whining lunatic who doesn’t appreciate the things she has, constantly obsesses over their former life in Queens where she was happier. They are pleasantly surprised when his hotheaded older brother Jimmy (Kieran Culkin) arrives home a week early on leave from the army reserves, awaiting deployment to the Falkland Islands or some other hot spot. Jimmy is closer to his mother, and has some serious issues with his dad.

In school, Scott is picked on by the school bully (Scarimbolo) but has eyes for his childhood friend Adrianna (Roberts) whom he’s had a crush on since he was eight years only. Her family is close to his, but they’re nearly as dysfunctional as the Bartletts. Her dad Charlie (Hutton) has contracted Lyme’s Disease on a deer hunting trip with Mickey and Scott. Her mom Melissa (Nixon) has by necessity become the breadwinner, working for Mickey as a sales associate.

Conditions become more volatile as Scott and Adrianna begin to get closer, but secrets that the adults are hiding soon begin to bubble to the surface, and threaten the world they’ve carefully built for themselves and their children.

Director Martini co-wrote the script with his brother Steven, basing it on their own experiences growing up on El Lie. This is definitely a slice of life motion picture, and it’s an honest one. That slice tastes great at times and tastes funky at others, but it always is an honest taste, for better or for worse. Martini re-creates the world of the ‘70s adequately; he depicts the drug use and sexual promiscuity that was part and parcel of that era. He nicely utilizes news footage of the day. In all honesty, I have to say that I didn’t feel immersed in the period, but that’s okay because this is a movie more about the story than the setting.

Part of what makes this movie work, besides the authentic-feeling writing, is the performances of the leads. Hutton and Baldwin are two pros who are as dependable as they come. They ring true every moment they are onscreen. Both characters are highly flawed individuals but Hutton and Baldwin make them both sympathetic. Same goes for Hennessy and Nixon, who have roles that are mostly thankless but are believable nonetheless.

The real revelation here from a performance standpoint is the Culkin brothers. Honestly, I expected them to be mediocre at best, but in point of fact they do outstanding jobs here. Rory’s interaction with Roberts leads to one of the most awkward sex scenes ever. It’s also one of the most realistic depictions of first time sex I’ve ever seen. However, given the use of drugs and sex by the character, one must wonder what her famous Auntie Julia thinks of it all. It is certainly the most adult role the teenaged Roberts, a Disney Channel mainstay, has ever tackled.

This is an intelligently written film that profiles troubled marriages, troubled teens and troubled times. There is an authenticity here that can only come from personal experience. It feels less like a movie and more like a voyeur looking in on actual lives, observing close at hand what goes on behind closed doors. The warts-and-all performances overcome the movie’s not-quite-successful evocation of era.

I’ve always been exceptionally fond of movies that give you a sense of looking in on lives as opposed to watching performances that approximate reality. That helps give you insight on your own life in my opinion. Granted, most lives aren’t as convoluted and chaotic as the lives of the Bartletts and the Braggs, but by following their example – or rather, learning from their mistakes – perhaps we won’t have to.

WHY RENT THIS: Written with the kind of authenticity that comes from personal experience. Extremely competent performances, particularly from the Culkin brothers, Baldwin and Hutton, give a sense of real people with plenty of flaws living real lives.

WHY RENT SOMETHING ELSE: The era of 1970’s Long Island isn’t as immersive as it could be, although the superior writing overcomes this.

FAMILY VALUES: Very adult storyline, with much drug use and two semi-explicit sex scenes, including one between teens. While these are consistent with the era, they may not be appropriate for younger viewers.

TRIVIAL PURSUITS: Kirean Culkin was initially cast in the role of Scott, but by the time financing was secured to make the film, he had grown too old for the role and was instead cast as older brother Jimmy with his brother Rory getting the role of Scott.