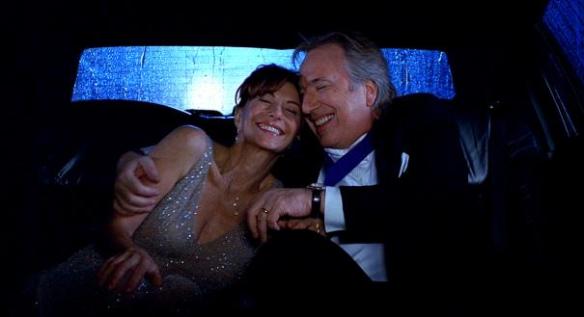 The world can sometimes be a cruel place. Some people slog ahead and work all their lives and get zero recognition, while others who are wholly undeserving seem to have it all.

Barkley Michaelson (Greenburg) is one of the former. He is working on his PhD thesis but has lived under the larger than life shadow of his father Eli (Rickman), a brilliant scientist, an esteemed university professor and an utter bastard. Eli lives in the center of his own universe, belittling anyone who doesn’t measure up to his standards – especially his son – and constantly having brief affairs with attractive co-eds who he has as little regard for as he would used underwear.

Things go from bad to worse for Barkley when it is announced that his father has won the Nobel Prize for Chemistry. His egotistical dad becomes truly insufferable, so much so even his long-suffering wife Sarah (Steenburgen) begins to protest. Despondent, Barkley meets up with a quirky girl named City Hall (Dushku) at a slam poetry reading and has a one-night stand, causing him to miss the flight to Stockholm for the ceremony. This in turn leads him to be kidnapped.

Eli is dumbfounded when his son is kidnapped. Why would anyone want him, after all? However when the kidnapper (Hatosy) demands the Nobel Prize money in exchange for Barkley, Eli haughtily responds “I’ll keep the money. You can keep my son.” Even the kidnapper, who turns out to be the illegitimate son of Eli, finds some sympathy for Barkley, his half-brother. The two bond and decide to split the ransom, which Eli pays after a severed thumb is sent to him and Sarah finally puts her foot down.

It looks like the kidnapper and Barkley have gotten away with it but a suspicious detective (Pullman) who has a history with Sarah might blow the whole deal. There is also a secret, carefully hidden, that if it gets out might be a game changer for everyone involved.

Miller co-wrote and directed this movie which often seems undecided as to what it wants to be. In some places, it’s a dysfunctional family comedy; in others it’s a suspense thriller. There’s no denying that it has some spunk however. Rickman is perhaps the best in the business at playing unlikable characters without being clichés, and he does so once again here. Eli is written with more depth than most of the characters here, having some real issues that come out late in the film. Rickman brings these to life and elevates the movie in the process.

The cast here is strong. DeVito plays “a recovering obsessive/compulsive” gardener who becomes a key figure in the investigation. DeVito, no stranger to playing unlikable characters, plays more of a creep than anything else. Steenburgen is one of those actresses who when she is allowed to shine is as good as anyone else in the movies, and for a change she gets some substance to work with and she takes advantage of it.

There are a lot of plot complications and most of them are telegraphed, or at least unsurprising. I think it would be fair to say that the writers really didn’t provide me with anything here that piqued my interest; most of my praise is reserved for the acting, which is outstanding in places. On that basis I can give Nobel Son a solid recommendation with the caveat that the plot could have used some tweaking.

WHY RENT THIS: Anything with Alan Rickman in it is going to be worth seeing. The rest of the cast does a fine job. Some nice laughs in the movie.

WHY RENT SOMETHING ELSE: Some of the plot points are a bit telegraphed. Nothing in the movie really makes you stand up and take notice.

FAMILY VALUES: There is at least one gruesome image that might be a little too much for kids. Other than that, some cursing and some scenes of implied sexuality, it’s just fine for teens.