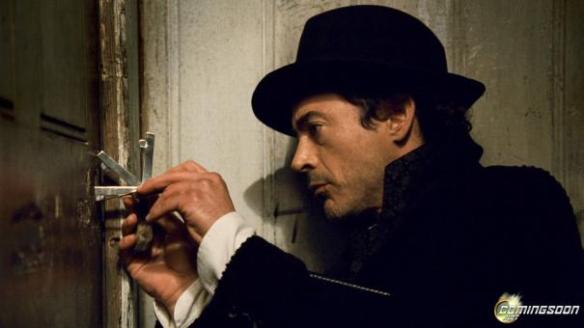 Sherlock Holmes engages in a little breaing and entering.

This is the latest re-imagining of the Arthur Conan Doyle character. Here, director Ritchie (Lock, Stock and Two Smoking Barrels) gives Holmes a more action-adventure bent as the legendary detective and his faithful companion Dr. Watson take on an evil noble with the fate of the very British Empire at stake!

Rating: PG-13 (for intense sequences of violence and action, some startling images and a scene of suggestive material)

(Universal) Meryl Streep, Alec Baldwin, Steve Martin, John Krasinski. A woman who’s husband left her for a younger woman (which he later married) finds herself in the odd position of having an affair with her ex-husband. That’s right, now she’s the other woman…only she was there first. It’s all so…so…complicated. Say, wait a minute…(please note that the studio has appealed the MPAA’s “R” rating and is looking to get a more reasonable PG-13).

Rating: R (for some drug content and sexuality. PENDING APPEAL)

(Weinstein) Daniel Day-Lewis, Marion Cotillard, Sophia Loren, Penelope Cruz. Director Rob Marshall, an Oscar winner for Chicago, revisits the Broadway musical with this big screen version of a 1982 Tony winner based on Federico Fellini’s notorious film 8 ½. The story revolves around a famous film director reaching a personal crisis of epic proportions while balancing the women in his life.

(Apparition) Emily Blunt, Rupert Friend, Miranda Richardson, Paul Bettany. A chronicle of the turbulent early years of the legendary English queen’s reign, and of her romance with Prince Albert of Prussia. This features an all-star cast of respected British thespians, too many to list in this preview.

Rating: PG (for some mild sensuality, a scene of violence, and brief incidental language and smoking)