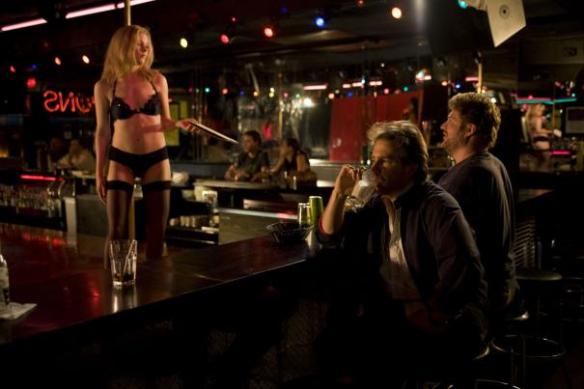 Sam Rockwell ponders his next role.

Author Chuck Palahniuk is best known for the film adapted from his novel, Fight Club. And since rule number one of Fight Club is that we don’t talk about Fight Club, we’ll just have to talk about the second novel of his to be adapted to the film medium.

Victor Mancini (Rockwell) is a sex addict. He attends regular sessions of Sex Addicts Anonymous when he isn’t working his day job as a historical re-enactor for Colonial Williamsburg. He is trying to make ends meet while keeping his mother Ida (Huston) in an expensive medical facility. Never stable to begin with, she has become increasingly more deranged as time goes by. Victor also supplements his income by deliberately choking in high class restaurants and allowing himself to be saved by wealthy diners who then become patrons, as it were.

Victor’s best friend Denny (Henke) also works with him as a re-enactor and has problems connecting with women. Victor has no such problems; he is continually establishing brief and more or less meaningless sexual relationships with women who are more or less interested in the same. However, his life is turned upside down when his mother in a rare lucid moment, confesses that she lied to him about the identity of his true birth father. Victor enlists the aid of a sympathetic attending physician, Dr. Paige Marshall (Macdonald) to assist him to find out from his mother where the hidden identity of his father might be, but he doesn’t count on forming a bond with the good doctor that might just be the key to something more lasting for him. However, when you have a situation where two people continually bend the truth to their own specifications, can they really form a relationship that will endure?

Actor/director Gregg also adapted the source material for the screen, and an ambitious undertaking it was, too. The original Palahniuk novel is densely plotted, with a complicated plot that doesn’t really lend itself to a 90 minute movie. Still, Gregg gives it a game effort and if he doesn’t succeed in every instance, at least you’ve gotta give him an “A” for effort.

Rockwell is the centerpiece here, a genetically unlikable sort who has a wisecrack for every occasion and lives for his next bit of poontang. His name has appeared regularly on the pages of Cinema365 in movies like Snow Angels and Everybody’s Fine and he seems to be willing to tackle offbeat roles of the sort that have been the exclusive hunting ground of guys like Christopher Walken and John Malkovich. Less mannered than either, there is a curious everyman quality to Rockwell even as he tackles roles that are far from every man. Huston is one of those actresses who is often overlooked for some odd reason but in nearly every movie she is in, she shines and she certainly does so here as a mom that would make Jenny Fields from The World According to Garp look like June Cleaver.

There are some very funny moments, some clever dialogue and some genuine poignancy. What we really don’t get is consistency; some of the scenes are really hit or miss and not everything works perfectly. Nonetheless, enough of it hits that it is certainly a recommendation, particularly for those who like their movies on the different side. There is a good deal of sexuality here so those who are offended by that sort of thing should just move along. Those who are not however would not be wasting their time to pick this up at the rental counter.

WHY RENT THIS: Rockwell is well on his way to becoming one of the finest actors of his generation. While Gregg gives the source material his own spin, there is enough Palahniuk to make this worthwhile.

WHY RENT SOMETHING ELSE: The movie is often scattershot in an effort to blend the complex elements of the novel into a single, focused film.

FAMILY VALUES: There’s a lot of sex, nudity and language so bluenoses beware!

TRIVIAL PURSUIT: Book author Chuck Palahniuk cameos as the man sitting on the plane next to Victor at the end of the movie.

NOTABLE DVD EXTRAS: There is a conversation between Palahniuk and Gregg about the adaptation of novel to film that’s a fascinating look at the process.