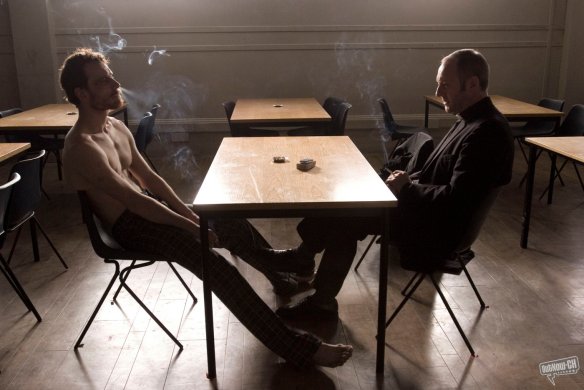 Bobby Sands seeks counsel from a priest in the most compelling scene from Hunger.

Change doesn’t always come through discussion and negotiation. Sometimes, when all else fails, one must risk everything to effect meaningful change.

Bobby Sands (Fassbender) is a member of the Irish Republican Army who was imprisoned in Long Kesh, the prison the British used primarily to house members of the IRA. He and his fellow Irishmen in the prison are protesting prison conditions by refusing to shave or bathe. They yearn to be recognized as political prisoners, which they consider themselves to be, by the British government of Margaret Thatcher, who considers them nothing more than common criminals.

The prisoners are brutally beaten and forced to shave, particularly by Lohan, a guard (Graham) who seems conflicted by his duties. It is clear their tactics aren’t working. Sands decides to go on a hunger strike, a massive one involving all the prisoners until their cause is recognized. There had been a previous hunger strike that had been unsuccessful but Sands felt it was because the strikers had never been prepared to actually take that strike to its logical conclusion; it was more of a protest than a negotiation tactic.

He argues the point with a particularly level-headed Catholic Priest (Cunningham), a realist with a world view that is remarkably logical. The priest argues the ineffectiveness of the tactic as opposed to its morality; never once does he mention the word “sin.” It’s a compelling scene, shot in one, continuous take, 17 minutes worth. It is one of the longest continuous shots in the history of film and is a masterpiece of filmmaking.

Sands would refuse food for 66 days and suffered horrifying physical debilitation; kidney failure, ulcerating sores, weakness. He eventually died and became a martyr to the Irish Republican cause, a position he continues to occupy 28 years after the events of the strike.

McQueen is careful not to over-politicize the movie but it is clear his sympathies lie more with the prisoners than the Thatcher government. McQueen concentrates on prison conditions rather than on the actions that got the prisoners there in the first place which tends to make the men more sympathetic than they might have been. Nonetheless it is a compelling story, a story of will and absolute belief in a cause.

McQueen doesn’t tell this story in a conventional manner. Sands hardly appears at all until nearly halfway through the film when he decides to initiate the strike. I don’t necessarily have a problem with this – it’s clear McQueen is a gifted filmmaker. My only issue is that he has a tendency to use imagery as an end rather than a means; flocks of birds which quite obviously symbolize freedom appear often. I don’t mind a symbol; I just object to being hit in the face with it as if I couldn’t figure it out on my own.

The acting is very solid, but Fassbender and Cunningham elevate. Their scene together may be one of the best I’ve seen this year. Most of the cast aren’t well-known here in the States, but they do some very credible work in difficult circumstances.

Sands is implacable in his dedication to his cause, as fanatics are. He is willing to lead his fellow prisoners to death in order to get his point across, as indeed he did. Did he get the concessions he wanted? History tells us for the most part he did. Although the prisoners of Long Kesh were never formally recognized by the Thatcher government as political prisoners, they were in fact treated that way. In the end, the Sinn Fein would be recognized as a legitimate political entity and Ireland would eventually see peace.

The figure of Bobby Sands still looms large in the Irish psyche and to a certain extent, as a polarizing force. Some see him as a hero and a martyr while others see him as a criminal and a coward. McQueen clearly sees him as the former. For my part, I admire his dedication to the cause. However, that is tempered by my discomfort with the tactics of the IRA, who used bombs and guns to get their point across, often on innocent people. I simply can’t condone it, although there are many who feel that they were fully justified in what they did. I don’t know how I would have felt living a Catholic in Belfast in that time; perhaps I would have seen things differently. Still, this is a story that should be told and here, it is told tolerably well. While I don’t ever get the impression that I knew who the man Bobby Sands was from watching this film, I at least get a sense of what he went through at the end of his life.

WHY RENT THIS: A no punches pulled, no holds barred look at the final six weeks of IRA hunger strike organizer Bobby Sands’ life. The scene between Fassbender and Cunningham is the highlight of the movie.

WHY RENT SOMETHING ELSE: McQueen’s gratuitous use of flocking birds got to be annoying and unnecessary. “Look Ma, I’m directing.” McQueen’s sympathies clearly lie with the IRA, which may be difficult for some to accept.

FAMILY VALUES: A lot of male frontal nudity, depictions of graphic prison brutality as well as the effects of starvation. Not for the squeamish in any way, shape or form.

TRIVIAL PURSUIT: Actor Liam Cunningham roomed with Michael Fassbender prior to filming in order to practice their 17 minute scene together, knowing it would be filmed in one continuous shot. Even though they often practiced the scene five to ten times a day for weeks, it still took four takes to get the scene right.