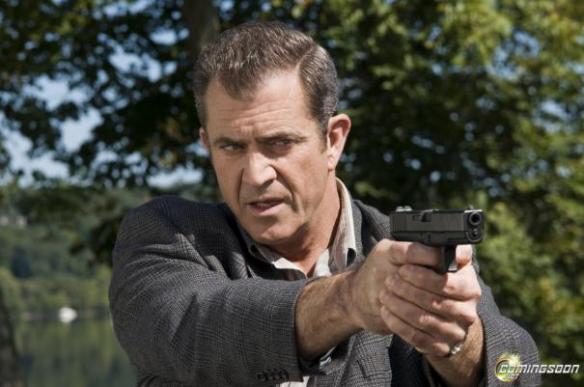 Mel Gibson fields one too many questions from the press about the DUI incident of a few years ago.

Rough-hewn Boston homicide detective Thomas Craven witnesses the murder of his daughter on his very doorstep. At first, it is assumed that he was the intended target but he quickly comes to believe that those suspicions are erroneous. To find out the truth about his daughter’s death he must first discover the truth about her secret life, and that involves a journey into corporate cover-ups and governmental collusion. As the bodies begin to pile up, he is aided by a shadowy agent whose motives may or may not have Craven’s best interest in mind. Of course, those folks responsible for the mayhem should have learned from the British – you don’t mess with Mel’s kinfolk and expect to survive.

(Fox Searchlight) Jeff Bridges, Maggie Gyllenhaal, Robert Duvall, Sarah Jane Morris. A broken-down country singer by the name of Bad Blake who has had a run of luck that befits his name encounters a young journalist who re-inspires him. It looks like Blake might find the success that has eluded him for so long but he has been his own worst enemy all his life and could torpedo his chances yet again. Bridges has already garnered a Golden Globe and SAG award for his work here and is the odds-on favorite for the Best Actor Oscar come March.

(Oscilloscope Laboratories) Ben Foster, Woody Harrelson, Samantha Morton, Jena Malone. An army officer just back from a tour of Iraq is assigned to the Casualty Notification office to inform loved ones of fallen soldiers. He is partnered with a veteran of the office who shows him the proper way to break the terrible news. He also falls for one of the women he has informed of their husband’s death, causing him to lose his emotional detachment and just perhaps helping him to heal from his own wounds. This powerful independent film has attracted notice on the Awards front, particularly for Harrison who has been nominated for a Supporting Actor award for both the Golden Globes and the SAGs.

Rating: R (for language and some sexual content/nudity)

(Touchstone) Kristen Bell, Josh Duhamel, Will Arnett, Dax Shepard. An ambitious and successful New York woman goes to Rome for her sister’s wedding. Disillusioned by romance in general and her own romantic choices in particular, she decides on a whim to pluck coins from a magic fountain that brings love to whoever tosses coins into it. She discovers, to her horror, that she is being pursued by the men who had tossed the coins into the fountain. When she is also pursued by a handsome reporter whom she has developed feelings for, she is worried that his feelings were generated by the magic of the fountain rather than being genuine. How much do you want to bet that the two wind up together at the end of the movie?