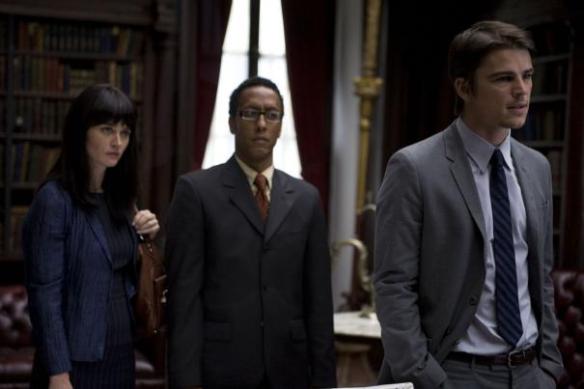 Robin Tunney and Andre Royo are baffled by Josh Hartnett's rehearsal of an Oscar acceptance speech.

America is fascinated by entrepreneurs, particular the ones that seem to live by their own rulebook. We applaud their aggressiveness and secretly admire their ability to take risks and go after whatever they want, an ability that most of us don’t possess.

Tom Sterling (Hartnett) is the public face of LandShark, a dot com whose product is never really detailed. His brother Joshua (Scott) is the genius behind LandShark, the programmer who developed the product that has made the executives of the company billionaires when the company went public. Tom is the salesman, the loud, brash jerk who has a perpetual middle finger extended to those who don’t get with the program.

That was at the beginning of 2001. As the summer would wear on, the bursting bubble of the dot.com world would render their shares nearly worthless. The capital needed to operate the company was evaporating. Tom’s rock star lifestyle of parties, clubs and an endless supply of willing women is a cover for his increasing loneliness and stress.

As the problems at LandShark continue to grow worse, the rift between the brothers grows incrementally. Joshua is everything Tom is not; where Tom is flashy, Joshua is reserved. Where Tom is aggressive, Joshua is mellow. Where Tom is self-absorbed, Joshua is all about his family. Tom has spent most of his money; Joshua has saved as much as he could.

Their parents (Lagerfelt, Torn) are refugees from the Sixties, socially aware and in the case of the father, a bit contemptuous of the accomplishments of his sons. Throw into the mix Sarrah (Harris), an architect that Tom once had a thing for and still in fact does and Tom’s life is about ready to explode.

This might easiest be explained as Wall Street.com but that’s not really the sum of its parts, not really. Tom Sterling is no Gordon Gekko, although the two share an ego that dwarfs the island of Manhattan. Certainly it is a cautionary tale that bears some resonance in an era when the excesses of unregulated business has brought our country to its economic knees.

However Hartnett carries the movie quite nicely; he is just enough of a prick to be interesting, just vulnerable enough to allow us to relate to him. It’s not what I would call an Oscar-worthy performance, but it does illustrate why Hartnett is becoming one of the most solid lead actors around; while he hasn’t gotten the major studio roles that can bring recognition and better roles, he is due for one.

Bowie shows up in the last reel as an old money venture capitalist that holds the fate of LandShark in his hands, and the part is memorable to say the least. Torn, Harris and Scott all do well in their roles as well. In fact, the movie is uniformly well-acted.

The writing could have used a little shoring up. At times, the movie seems to lose its focus and by the end of the movie I found myself wondering if there was a real point here, other than to say “hey, business is, like, bad, dude” in a nasal, asthmatic wheeze. There was a story here but I’m nt sure they told all of it. Even so, there’s enough here to make it interesting viewing if you’re looking for something you haven’t seen yet.

WHY RENT THIS: The arrogance and frenetic lifestyle of the dot.com millionaires is perfectly captured. Hartnett performs solidly and Bowie is a pleasant addition in the third reel.

WHY RENT SOMETHING ELSE: The plot meanders a little bit and the point is a little elusive.

FAMILY VALUES: There’s a whole lot of foul language and a whole little bit of sexuality, enough to make this for mature audiences only.

TRIVIAL PURSUIT: Nathan Larson, who composed the electronic score for the movie, is married to Swedish pop star Nina Persson of The Cardigans.