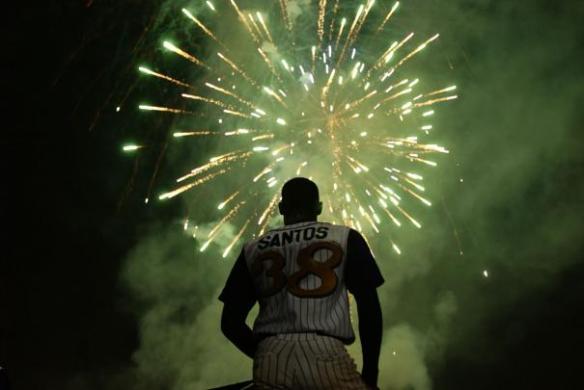 In baseball there is always fireworks.

Dreams are a very personal thing. We all have them – some sort of goal that we yearn to achieve, be it a career, a relationship or a life goal. Sometimes, our dreams turn out to be very different in reality than they are in our minds.

In the Dominican Republic, baseball is more than a sport; it’s a ticket out of the abject poverty that blankets much of the country. For Miguel “Sugar” Santos, a pitcher with raw talent, that ticket is about to be cashed. He attends the camp of the Kansas City Knights, a Major League Baseball team with a talent camp in the Dominican.

Sugar’s talent nets him a minor league contract and he reports to the Quad City Swing, a team located in the middle of Iowa. Sugar is sent to live with the Higgins family; motherly Helen (Whitney) and curmudgeonly Earl (Bull). This is farm country and it’s as alien from Sugar’s circumstances as you could possibly get.

The Higgins’ granddaughter Anne (Porterfield) takes a shine to Sugar, but she like her grandparents are Evangelical Christians and as much as she likes him, it’s his soul she’s more concerned with. Sugar also has friends on the ballclub, fellow Dominican Jorge (Rufino) and Brad (Holland), a whiz-bang prospect who already has grad school at Stanford lined up if baseball doesn’t work out for him.

Sugar has no such prospects; it’s either baseball or nothing. At first, he tears up the league but as the summer wears on, Sugar begins to fall prey to the physical toll of the game. As his frustration mounts, he begins to wonder if his major league dream is just the fantasy of a naïve young man or truly his destiny to achieve.

This sounds a lot like every other sports underdog movie you’ll ever see, but almost immediately you’ll begin to discover it’s not anything like that. For one thing, this isn’t about baseball; it’s about life. One of the coaches tells Sugar early on “life gives you many opportunities; baseball gives you just one” and he’s right about that. This is a move about opportunity and what you do with them.

This is the first major role for Soto and he makes the most of it. You get the impression that this might very well be the role he’s remembered for and if that’s the case it’s not a bad legacy to leave behind. Sugar is quiet and sweet-natured but he has a breaking point. He gets angry, frustrated and weak. He makes mistakes and he does things he knows he shouldn’t do, but like most of us, does them anyway.

I’m told that the nuts and bolts of the story are very accurate; camps like the one depicted here are commonplace in the Dominican and the portrayal of the minor league system is just as correct.

WHY RENT THIS: A realistic and moving look at the dreams and aspirations of a Dominican baseball player.

WHY RENT SOMETHING ELSE: The pace drags in places.

FAMILY VALUES: There’s some foul language and a little sexuality. Nothing more gratuitous than you might find on the average HBO show.

TRIVIAL PURSUIT: The Kansas City Knights aren’t a real major league baseball team (the Kansas City Royals are the name of the MLB team); the nickname is a nod to The Natural in which Roy Hobbs played for the New York Knights.

NOTABLE DVD EXTRAS: There is an interesting featurette on baseball in the Dominican.