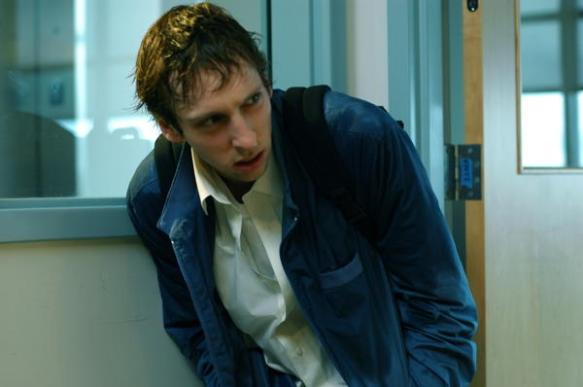 Joel David Moore is getting tired of all the wedgies.

We are, all of us, victims of our past. The demons that are a result of past traumas often drive our present behavior. Some of us have demons that are more insistent and more deadly than others.

Mason (Moore) is a socially awkward cubicle dweller living in Portland, Oregon. Most of his fellow co-workers ignore him; Mason’s neuroses are many and notorious at work. That suits Mason just fine; he tends to be on the reclusive side in any case and prefers to spend most of his time listening to jazz records (we’re talking LPs here; Mason prefers the warmth of vinyl to the cold soullessness of CDs) and painting, and Mason is surprisingly talented at both.

At work his only friend (and we use the term loosely here) is Berkeley (Levi), who also happens to be his boss. Berkeley is not particularly a nice guy, but he seems to have a soft spot for Mason and kind of adopts him, which Mason seems to accept albeit not with great enthusiasm. Mason exists in the curious shadowland that is Portland in the fall, when the nights get darker and the rain falls incessantly in a cold curtain of camouflage.

His life turns around when he meets Amber (Tamblyn), a new co-worker who is as gregarious as Mason is shy. She is drawn to the shy young man, her curiosity piqued and for his part Mason is moved by her kindness and starts to come out of his shell. When Amber discovers Mason’s talent as an artist, she insists that he paint a portrait of her.

What Amber doesn’t know is that Mason is not at all well; he has been scarred by the murder of his mother by his father and is tormented by awful nightmares, nightmares that Mason thinks might possibly be real and if they are, Mason could very well be a mass murderer. Only Berkeley knows about the dreams and has dismissed them as just that, dreams. If he’s wrong, however, Amber is in mortal danger.

Moore’s name shows up all over this film as a co-writer, co-director and co-producer, as well as the lead actor so much of the blame or credit, depending on your opinion of the movie, will be directed his way. He certainly surrounded himself with able support; co-director Green went on to direct the much-acclaimed thriller Frozen, while Levi is best known for his work in “Chuck” (and he’s quite good here in a very different role). Tamblyn is one of the more underrated actresses working these days and she turns in a terrific performance as the lonely and insecure Amber who masks her insecurities with a kind of false sense of bonhomie.

Moore himself is best-known as being the gangly geek in Dodgeball and the scientific nebbish in Avatar. His own performance is not too shabby; he seems to be on the verge of tears often but there is a rage and tension just below the surface that makes you wonder if instead of tears we might not see homicidal mayhem instead. That’s the centerpiece of Spiral and the movie doesn’t work if you don’t believe it. Fortunately, I did.

I liked the sense of place and time in the movie; the environment of Portland becomes a big part of the mood and it is shot exceedingly well. There is almost the feel of an indie romantic drama here, and that also serves the movie well, making the jolts more effective when they come.

Like most movies, there is a twist to it and it’s not a bad one. One of the problems with psychological thrillers in general is that you’re expecting a twist so you spend most of the movie looking for one, and most veteran observers of the genre can usually spot them early on, but I didn’t so kudos on that account.

On the negative side, this feels a bit long and some of the scenes felt more like padding. It could have used a little more judicious editing to cut out some of the material that seemed to me to be extraneous, with certain scenes merely confirming what has already been established elsewhere in the movie. Still, this is a satisfying movie for its genre, a sandwich that could have used a bit more meat and a little less bread, but delicious even so.

WHY RENT THIS: The movie works because of its indie romantic drama feel that helps make the jolts more effective. Fine performances, particularly from Tamblyn and Levi, as well as Moore, characterize the film.

WHY RENT SOMETHING ELSE: Some of the scenes were unnecessary in terms of plot development and action and could easily have been snipped out.

FAMILY VALUES: There is some fairly disturbing imagery here as well as partial nudity and a bit of violence. The language is a bit blue in places. Probably okay for mature teens.

TRIVIAL PURSUIT: Amber Tamblyn’s dad Russ, he of West Side Story fame, shows up here as an extra.