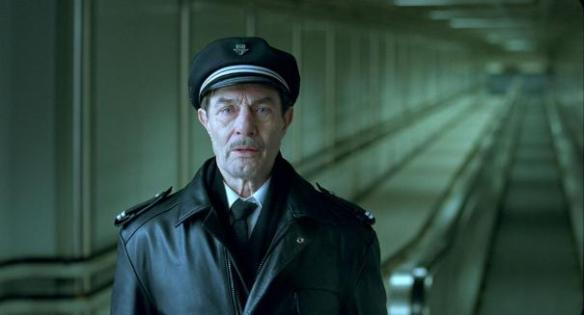 Odd Horten faces an uncertain future while his past stretches out behind him.

Some people like their life to be chaotic, preferring spontaneity and freedom. Others prefer their lives to be strictly ordered, ruled by an unbending schedule as inflexible as a train timetable.

Odd Horten (Owe) may have an unusual first name by our standards but in Norway it’s quite common. However, nothing else is common about Horten. He is a train engineer, driving trains on a run from Oslo to Bergen and back again. He is also a few days from his 67th birthday, the mandatory retirement age in Norway. Most know him by his ever-present pipe.

His last run takes him to the hotel of Mrs. Thogersen (Norby) where he normally stays overnight in Bergen. She seems to be sweet on him, but whatever relationship they have is not really expressed overtly. You get the feeling that there is something more than company on their minds.

His fellow engineers throw him a farewell party. Apparently what passes for wild times in the train engineer community of Norway is identifying trains by the sound of their horns, and saluting the man of honor with a “chugga chugga chugga chugga chooooo choooooo” cry. However, he gets locked out of the flat complex when he goes out to buy some pipe tobacco and winds up spending the night of a young boy whose window he climbed through. It’s a long story and not nearly as sinister as it sounds.

Odd’s life changes in, well, odd ways. His carefully ordered existence becomes infused with chaos and unanticipated complications. Odd, a man who would never think of setting foot on an airplane (he’s far too loyal to trains) goes to the airport to meet a man to sell his boat to, then changes his mind at the last minute. He goes to his favorite restaurant to have dinner and a beer, only to see the chef chased out of the restaurant by the police. He goes to his favorite tobacconists to buy supplies for his pipe only to discover that the tobacconist has passed away and his widow is running the store.

Strangest of all is his friendship that evolves with a man he meets in the street. The man, Trygve Sissener (Skjonberg), claims to be a retired diplomat and he takes Odd home for a drink. There, Odd finds a room full of African tribal weapons and a friendly but lethargic dog. Trygve claims he can drive while blindfolded and Odd decides to go along for the ride. It’s a ride that ends in an unexpected way.

What I like about this movie is that it doesn’t shout so much as it whispers, which as we all know is a much more effective attention-getter. Odd is a bit on the quirky side, but not in an American indie way but in the way of a man who has lived his wife in a certain way for decades and suddenly finds himself needing to fill his time. Odd has no family, no friends as such, only a career. When that is gone, he has nothing…but rather than lament or lie down and die, he decides to reinvent himself and not even consciously at that.

Another thing I like in the movie is the glimpses we get of everyday Norwegian life. It’s a way different environment than we’re used to in Florida, that’s for certain. The ice and cold order the way of living there in the same way the sunshine orders life here. In an environment like Norway, warmth and comfort are valued highly, and it shows in the movie. Even Odd Horten’s Spartan lifestyle reflects that Norwegian aesthetic. Watching the movie made me feel warm and comfortable inside, much like sitting by the fire on a cold winter night.

The movie has an odd sense of humor that reflects not only the lead character but the director. Hamer has movies like Factotum and Kitchen Stories to his credit and while both are very different films than this, they share a certain air that I would label gentle fun. Hamer wisely lets his characters drive the film and Owe runs away with the movie. He is quiet and contemplative, keeping his emotions very close to the chest, but it is in his actions where you see where his heart lies. It’s a rock solid performance, one that makes this movie a memorable one.

Odd Horten is a man who never took chances in his life but as the movie ends he is taking plenty of them. It is a movie about personal growth and it is done in subtle and ultimately satisfying ways. There are no bells, no whistles and no fireworks – it’s just a man finding his way in a cold world – literally. It is the quiet, unassuming nature of the movie that ultimately makes it as satisfying as it is and worth seeing.

WHY RENT THIS: This quirky movie looks at aging and retirement with a gentle sense of humor. Owe is interesting to watch and the movie gives us an insight into Norwegian life.

WHY RENT SOMETHING ELSE: The gentle pacing may be too slow and unremarkable to audiences used to Hollywood films.

FAMILY VALUES: There is some brief nudity but nothing that should discourage you from allowing teens to watch this.