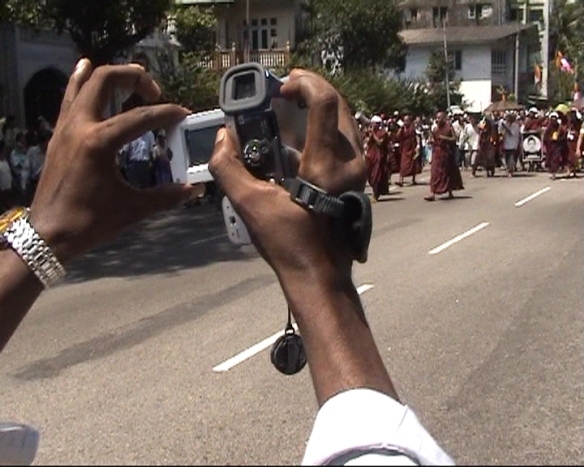 A courageous videographer documents events from the Saffron Revolution.

We take freedom for granted in a big way. While we can take the news we watch with a grain of salt, at least the government doesn’t completely censor any criticism of it with an iron fist. Our reporters don’t get thrown in jail and tortured for reporting the news.

That sounds far-fetched and yet it does happen in Burma, regularly. The country also known as Myanmar has been ruled by a military junta as repressive and cruel as any in the world today. Internet use is severely restricted and information flows at a sluggish pace. The news in and out of the country is limited; few in the West are truly aware of what takes place in Burma. In fact, many people in Burma itself are unaware of what’s going on in their own country.

However, there are a group of Burmese citizens, armed with small video cameras that are determined to make sure that the news of what’s happening in their country is documented and sent out for the world to see, including their own country. They are called the Democratic Voice of Burma.

The organization is headquartered in Oslo; the images and videos are smuggled out to them, and the news is then beamed by satellite into Burma and throughout the world. Those who carry the cameras risk terrible reprisals to themselves and their families if they are caught.

Few of them, such as “Joshua,” a young 27-year-old man who acts as our proxy in the DVB, have known anything but oppression and fear other than for a few weeks when there have been occasional uprisings. The junta, in place since 1962, has dealt with every challenge to its authority with absolute and merciless violence and arrests.

In August of 2007, the leaders of Burma added an arbitrary fuel tax that doubled the prices of gasoline and other fuels . This became intolerable to the average Burmese citizen and protests began to break out in the capital of Rangoon. At first, the government dealt with these the way they always did – by arresting those who would raise their voices against them. However, the people had reached a breaking point and thousands upon thousands took up the call.

Crucially, they were supported by the Buddhist monks of their country, perhaps the only other group within Burma that could take on the cruel military dictatorship. The powers that be in Burma allowed the Buddhists to protest, even allowing them to meet with Aung Sang Suu Kyi, a leader of the 1988 revolution who had been under house arrest since then and a woman revered by the Burmese people.

However, as it became apparent that the protests were growing in scope, the government began to do the unthinkable – a crackdown against the religious leaders of their nation. Hundreds of monks were arrested and many disappeared. Soldiers fired into crowds of protesters and killed hundreds, maybe thousands of peaceful protesters. The world would never have known if it weren’t for the images smuggled out by the DVB.

Director Ostergaard put together the footage, much of it never seen before, into a very compelling story that illustrates the incredible bravery not only of the protesters but of the videographers themselves. One gets a sense of the pervasive fear that dominates Burmese society, and the yearning for something better than what they all have.

This is a dictatorship that has stood for almost half a century and it doesn’t appear that it will be going away anytime soon. Watching this documentary makes you appreciate your own freedom and pray for the day when the people of Burma can enjoy their own. Perhaps we will see that day in our own lifetime; I sincerely hope so. Perhaps documentaries like this one will be the first step in that direction.

WHY RENT THIS: A depiction of bravery on a massive scale from a part of the world that is rarely depicted.

WHY RENT SOMETHING ELSE: If you don’t like powerful documentaries that teach you something about injustice in other parts of the world, you should go ahead and watch the next installment in the Twilight series.

FAMILY VALUES: Although the film is unrated, some of the themes are rather adult and there are some scenes in which there is violence; teens who are interested in the region will find this suitable.

TRIVIAL PURSUIT: Several videographers depicted in the film have since been arrested and jailed.

NOTABLE DVD EXTRAS: Crossing Midnight, a short document about Dr. Cynthia Maung who fled to Thailand in 1988 and founded the Mao Tae clinic along with several other medical personnel.