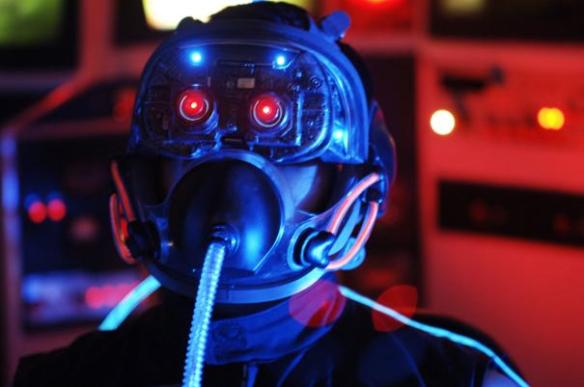 No sleep for the weary.

Technology has become in many ways a crutch. We have come to depend on it to solve our problems and make the world a better place, but it seems that rather than doing that it tends to create new problems. Still in all technology gives us hope for the future; but what happens when the future becomes a thing of the past?

In the near future, the United States has built a wall around it, closing its borders. It remains connected to the world via the Internet, to which people are plugging into now directly into their cortex and their spine so that not only do they experience onscreen but directly into their brains, able to experience the memories and emotions of others. This is a costly process, but it can be purchased on the black market for the right price.

Memo (Pena) lives in the Mexican village of Santa Ana Del Rio in Oaxaca. The river that nourished the farm of his father (Macias) has been dammed up by a big corporation and the cost of water has skyrocketed. None of this matters to Memo, who loves technology and dreams of being part of a brave new world. He has a talent for hacking and picks up military chatter of the security forces guarding the dam.

Unfortunately, he’s naïve about how sensitive the company is to being listened to. They perceive it to be the work of “aqua-terrorists,” groups that believe that the big corporations have no right to control basic human needs like water and are anxious to give water back to the people by any means necessary. The companies are quite willing to fight back, also by any means necessary. Unfortunately, there is collateral damage of innocents caught in the crossfire.

Devastated by having his home destroyed and his father killed by a military drone, Memo travels to Tijuana where he meets Luz Martinez (Varela), a budding reporter who sells interviews on her blog site, only nobody has purchased any yet. However, to her surprise, her interview with Memo is sold to an anonymous buyer who pays in advance for more interviews with Memo.

In the meantime, Memo has gotten implants on the black market, enabling him to connect to the Internet but more importantly, allowing him to get work in a virtual workplace. The technology exists for workers in Mexico to connect to computers who connect them to robots in the United States that do the actual physical labor; the Mexican workers control the robots. These workers are called “sleep dealers” because they are required to stay awake for their entire shift as falling asleep causes a feedback that can cause them injury and/or death, and their shifts can be very long indeed.

Memo however has more on his agenda then being a worker in this new age; he wants to find those responsible for the death of his father and bring them to justice. The key to his plans rests in the hands of a military pilot who no longer believes in the cause he’s fighting for. Can Memo fight the powers that be without being crushed by them?

First-time director Rivera is the son of first-generation immigrants from Peru; several of his cousins came to the United States as undocumented workers, so he has a real passion about their story. He is also extremely fond of science fiction movies, having been reared on movies like Blade Runner, Brazil and Star Wars.

Unfortunately, he doesn’t have the budget of any of those movies, so he has to make do with effects that are less than state of the art. The movie is visually striking nonetheless and the concept is exceedingly interesting, and makes some logical sense.

The acting isn’t what you’d call compelling, but Varela and Pena do solid jobs. Varela is the best-known member of the cast, having appeared in Blade II, Innocent Voices and Hell Ride. Pena is best known for his appearances in Mexican telanovelas, or soap operas.

One of the things that I love most about science fiction is that it gives us a forum for examining issues of the present-day. Certainly immigration and undocumented workers are a problem much on the minds of Americans, and certainly on the minds of those living south of the border. Globalization, both in economic terms as well as in terms of information exchange, seems to be inevitable, and will no doubt create problems of its own. The idea of virtual workers is not so far-fetched; as we offshore data entry and call center jobs, as well as manufacturing ones, it won’t be long until corporate sorts wanting to maximize profits will look for ways of offshoring manual labor as well.

Those who love dystopian visions are going to really dig this; those science fiction fans that prefer Star Wars-type action are going to be largely disappointed. Rivera has crafted a movie that does what it can with the budget it has, but more importantly, gives you pause to think. This is a very impressive debut that largely flew under the radar, getting almost no American release at all. It’s worth seeking out, although it might take some doing for you to find it. It’s well worth the effort.

WHY RENT THIS: An intriguing premise told from a viewpoint rarely seen in modern film – that of the undocumented worker.

WHY RENT SOMETHING ELSE: Budgetary constraints made some of the film’s effects look a little bit cheesy.

FAMILY VALUES: There’s some violence and a bit of sexuality; there are also a few thematic elements that might be a bit much for younger viewers.

TRIVIAL PURSUIT: The movie won the Waldo Salt Screenwriting Award and the Alfred P. Sloan Prize (given to a film focusing on science or technology) at the 2008 Sundance Film Festival.

TOMORROW: Everybody Wants to Be Italian