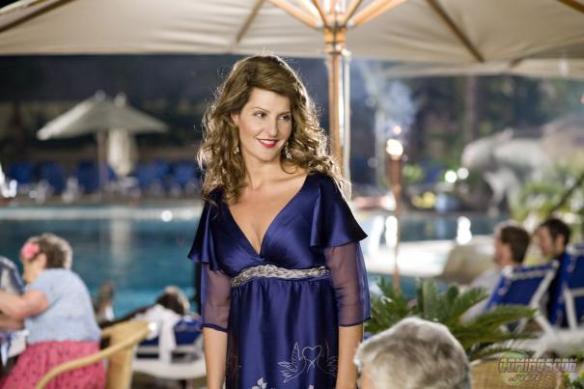 Is it just me or is Nia Vardalos looking like a young Kirstie Alley?

Life is meant to be lived to the fullest. Too many of us find ourselves spectators in our own story. Sometimes it takes a trip to where civilization began to find out what it means to be human.

Georgia (Vardalos) is an unemployed history professor who has been reduced to being a tour guide for the low-rent Pangloss Tours in Athens – the Greek one, for my readers in the Deep South. She has no life to speak of, her romantic life is a series of miscalculations and full-on bad ideas that have left her lonely and cynical.

Her passion is history and she yearns to pass on that passion for Greek culture, history and traditions to her tourists, but in all honesty she tends to be a bit of a priggish bore and her attempts at humor are right up there with the comic stylings of Al Gore. To make matters worse, she is almost always given the worst tour groups, while her rival Nico (MacGowan) always gets the energetic Canadian group that tips like they just won the lottery.

This trip she is saddled with a couple of beer-soaked Aussies, a kleptomaniac Brit (Bernette), a pair of man-hungry Spanish divorcees (Adanez and Botto), a boorish American couple (Williams, Dratch), a snooty English family, a boring American businessman and an earnest but geeky backpacker. Oh, and there’s also Irv (Dreyfus), an American retiree who punctuates everything with a joke like a Borscht Belt comic run amok. Their tour bus is driven by a shaggy, taciturn Greek named Poupi Kakas (Georgoulis). When his name is first introduced, I just knew I was in for a yuckfest.

Things go predictably badly. The group is not enamored of Georgia’s academic approach and is more interested in shopping for trinkets, frolicking on the beach and drinking in whatever taverna they can find on the road than in poking about yet another set of ancient ruins. Georgia is beside herself. It looks like yet another low rating for her and she is absolutely miserable. She decides this tour will be her last, but a funny thing happens on the way to the unemployment line; she discovers her inner Greek. She learns to take pleasure in life. She finds the soul within Irv who becomes something of a Delphic Oracle to the group (and no, that’s not a lesbian laptop…ba dum BUMP). She will also find the romance she’s been seeking in the form of Poupi, who after a shave and a haircut is transformed from the Unabomber to the cover of a Harlequin Romance paperback.

Nia Vardalos, who was so engaging, charming and funny in My Big Fat Greek Wedding is all that here, and 40 pounds slimmer too. She looks spectacular, but all the charm in the world can’t save this script. It’s full of ethnic stereotypes (shifty Greek merchants, boozy Australians, obnoxious Americans etc.) and rote romantic comedy plot points, making it too full for a whole lot of humor. Vardalos probably should have checked director Petrie’s resume – which includes Grumpy Old Men, My Favorite Martian and How to Lose a Guy in 10 Days – before signing up for this; Petrie seems to be a competent enough director, but his movies rarely rise far above mediocrity.

The scenery is gorgeous, although you will see much the same kind of thing in the average travel video. Greece has a particular charm that casts a spell on all who have ever been there; the movie at least captures the concept of it but not the charm itself. Dreyfus gamely gives Irv the best moments in the movie, and while he really doesn’t have a whole lot to work with (like the predictable Viagra jokes – hoo haw!) he at least is a seasoned pro, enough to make a nylon purse out of a sow’s ear.

I really do like Nia Vardalos as a performer, as does Tom Hanks and Rita Wilson who bankrolled this (as they did My Big Fat Greek Wedding). She can make you fall right in love with her and her Hellenic tendencies when given the right material. Unfortunately, this ain’t it. I can truthfully say it’s far better than the truly awful I Hate Valentine’s Day which was so bad I chose not to review it, but that’s not saying much at all. I can give it a mild recommendation but that’s all; there are far better tours of Greece than the one Vardalos gives here, even after her character gets her mojo back.

WHY RENT THIS: Vardalos is charming and the Greek countryside does weave a certain magic.

WHY RENT SOMETHING ELSE: The script is very paint-by-numbers and the humor is hit or miss.

FAMILY VALUES: There is a smattering of sexuality and language but for the most part is okay for general audiences.

NOTABLE DVD EXTRAS: The featurette “Everybody Loves Poupi” re-edits some of Georgoulis’ scenes to give him romantic interest in, well, everybody.

TOMORROW: Perfume: The Story of a Murderer