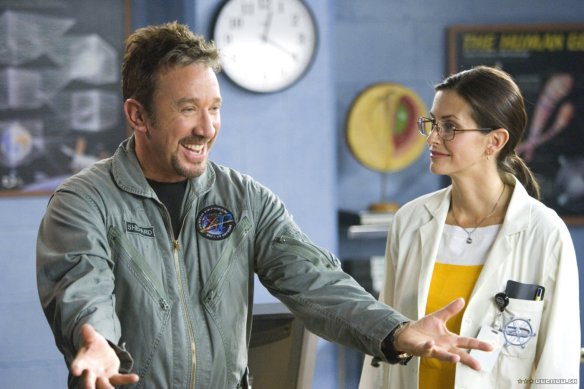 Tim Allen is pleased to find out that he isn't responsible for the problems of Zoom.

I’m all for superheroes. I love ’em. Really, I do. Give me a movie about a superhero and I’ll almost certainly be there, unless it’s Catwoman. I will admit to missing that one, and after I saw it on DVD, I realized I’d made the right decision. I’ve even enjoyed the faux heroes of Sky High and The Specials.

Being a long time fan of the genre, I will admit that much of what goes on is intended for younger audiences. After all, comic books are part of the American landscape for most kids. That’s why it didn’t faze me – at least at first – that a superhero movie was coming out aimed directly for small fries. I enjoy Tim Allen, at least most of the time, so I had hopes that this would be along the lines of a GalaxyQuest for the spandex set.

Hope may spring eternal for a blogger, but not so much for Jack Shepard (Allen). He runs an auto shop that prides itself on taking the time to fix cars right. What his customers don’t know is that Jack was once better known by another name – Zoom, team leader of the Zenith Project, kids with special powers who had been trained by the government to be a genuine superhero team. They had been the pride of America, protecting us from threats foreign and domestic until an ambitious general named Larraby (Torn) irradiated them with gamma radiation (doesn’t Bruce Banner have a patent on that?) causing one of them, Concussion, to go berserk and attack his own team, killing all of them except for Zoom who is forced to run faster than he ever has before, creating a vortex into which his brother is sucked, never to be seen again. This leaves Jack without any speed powers (except in one finger) and retired, more or less happily, for 30 years.

However, there is a threat on the horizon. Nebbish scientist Dr. Grant (Chase) has determined that a transdimensional portal is about to manifest in our world, and when it does Concussion will be loosed on our world again. He and General Larraby decide to revive Project Zenith and use the powerless Zoom as a trainer for a new generation of heroes. Comely (but clumsy) psychologist Marsha Holloway (Cox) is sent to fetch Jack, promising him that the kids won’t be irradiated, but “natural ” methods will be used. A half million dollar paycheck doesn’t hurt either.

The kids – superstrong six-year-old Cindy Collins a.k.a. Princess (Newman), chunky twelve-year-old Tucker Williams a.k.a. Megaboy (Breslin) who is able to inflate various parts of his body, sixteen-year-old telekinetic Summer Jones a.k.a. Wonder (Mara) and seventeen-year-old Dylan West a.k.a. Houdini (Cassidy) who is able to turn invisible at will – are skeptical. The world has changed in thirty years and the idea of becoming a superhero, while cool, is a little passé. Zoom, for his part, is just going through the motions. He hasn’t been told what the kids are being trained for, so he thinks it’s just a government lark. He’s there strictly for the paycheck.

As time grows short, the pressure begins to mount on Jack to train the kids – or else. Gradually, he begins to grudgingly learn to like the kids and begins to actually prepare them for the life of a superhero, until he finds out the truth. Can he prepare the kids in time so that they don’t meet the same end as his previous team?

The movie is loosely – verrrrrry loosely – based on an illustrated book by Jason Lethcoe. However, the similarities between his book and Sky High were too noticeable and so the decision was made to alter the storyline. What results is a pastiche from various movies, some good, some bad but none working cohesively. Allen and Cox do their work gamely and manage not to disgrace themselves. Neither does the young cast, although Newman’s Princess was so annoying that by the end of the movie I was hoping that a meteor might hit her, or at least some calamity would befall her that might cause her to miss the rest of the movie.

Because the movie is aimed squarely at a younger set, the action is dumbed down. The fact that Jack’s team (which included his fiancee, by the way) had been killed by his own brother could have been explored in greater depth, but it was glossed over, the filmmakers not wanting anything unpleasant for the tykes in the audience to dwell on. Mostly everyone acts like buffoons, and the comedy, such as it is, is of the pee-pee doo-doo ca-ca variety, as one of my writing teachers used to identify the style.

This very much has the look and feel of a Saturday morning made-for-TV movie, something that might have aired on the Disney channel or Nickelodeon (and it probably will anyway). Young kids who are not so discerning (and I’m talking of the four to six-year-old variety) will probably get a kick out of it, while their parents will spend their time eagerly anticipating the end credits. That’s a shame, because there are some nice elements here, enough so that they could have made a decent movie of it in better hands. Director Pete Hewitt (whose previous movie was Garfield which should tell you all you need to know) needs to go back to the drawing board and rethink this one. Incidentally, the movie was released theatrically as Zoom but was retitled for the DVD release on perhaps the hopelessly insane chance that the audience might not recognize it.

WHY RENT THIS: Allen and Cox are at least pleasant. Some of the special effects are tolerable.

WHY RENT SOMETHING ELSE: Dumbed down for kids, the movie misses some real opportunities to explore complex themes. Newman is way annoying.

FAMILY VALUES: Some of the rumor is a little rude and of the toilet variety but otherwise okay for most kids.

TRIVIAL PURSUIT: A photo of the old Zenith team not only includes Allen and Zegers but also Alexis Bledel, Wilmer Valderrama and Devon Aoki.

BOX OFFICE PERFORMANCE: $12.5M on an unreported production budget (but one I would guess would be north of $50M); the movie was a major flop.

2 thoughts on “Zoom: Academy for Superheroes”