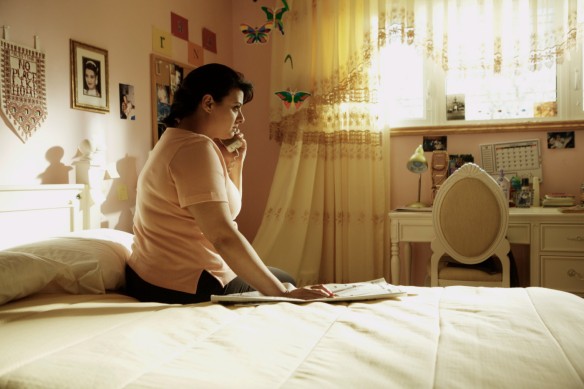 Nisreen Faour finds out about another American institution; the dinnertime sales solicitation call.

While our economy has taken a nosedive and Americans are suffering through one of the worst recessions in history, we can at least take comfort that at least we are not an occupied nation. Palestinians don’t even have that.

Muna Farah (Faour) lives on the West Bank and, ironically enough, works in a bank. A bank on the West Bank…okay, I had to point it out. Anyway, she has to endure two military checkpoints in each direction going from her home to work and back. It is often humiliating, especially when her son Fadi (Muallem) loses patience and makes a smart remark to one of the soldiers, nearly getting detained in the process if nor for the begging and pleading of his mother.

Muna dreams of a better life in America (or Amreeka as it is pronounced in Arabic) where her sister Raghda (Abbass) escaped 15 years before. Although ostensibly Muslim, she isn’t particularly devout which makes her a bit of a pariah in her own land. However, she hits the jackpot when she gets a green card in the annual lottery for one of the coveted documents. Although she knows she will miss her family in Palestine, she looks forward to better things for her and her son in a new land, and quite frankly, Fadi is gung ho to get out of Dodge. Before they leave, Muna’s mom gives her some cookies and other food to bring to Raghda.

At O’Hare Airport in Chicago, Muna and her son are detained for three hours. It is 2002, not long after 9/11 and tensions are running high, particularly with any Arabic sorts coming into the country. While Muna is arguing with one of the immigration officials, the cookies and other foods are confiscated by the customs agents.

Unfortunately, Muna foolishly put all her life savings into the cookie tin. Broke and too proud to accept help from her sister other than the lodging in their suburban home. Raghda’s husband Nabeel (Abu-Warda) is a prosperous dentist, but he is watching his practice disintegrate before his eyes as long-time patients, distrusting any Arab, are leaving for non-Arabic doctors.

Muna is unable to find work suitable for her banking experience and takes the only job she can find – working the counter at a White Castle. Once again her pride prevents her from informing her family that she has such a menial job, so she leads them to believe she is working in a neighboring bank, scurrying over to her real workplace after Raghda drops her off at the bank.

Fadi on the other hand is having enormous difficulty fitting in at the local high school, which is truly a staggering task even under the best of circumstances, but throwing in his ethnicity and his unfamiliarity with American high school culture and he is having a rough time. His cousin Salma (Shawkat) helps guide him through the minefields that are American high schools, but even so he manages to step on a few nonetheless.

There are a few other plot elements (such as a romance for Muna with the Jewish principal of Fadi’s school, played with gentle humor by Ziegler) but that’s essentially it. This is writer/director Dabis’ first feature and is heavily based on her own experiences growing up as an immigrant from Jordan in Ohio. There are some moments that are genuinely heartwarming as well as others that are wrenching.

Part of what makes this movie so watchable is a very likable cast, starting with Faour. She is not the lithe and lean starlet that most lead actresses are, but down-to-earth, charming and possessed of a smile that lights up entire cities. In that sense, she reminds me of the My Big Fat Greek Wedding-era Nia Vardalos, albeit with less brass.

Abbass is one of my favorite actresses you’ve never heard of. She is best known for a small but pivotal role in The Visitor but was completely overshadowed by Richard Jenkins there; she has also appeared in such gems as Lemon Tree and The Syrian Bride and was superb in each. She has more of a supporting role, but lends dignity and world-weariness to the part of a woman desperately homesick, and watching her situation fall apart before her very eyes, with everything she values in jeopardy including her marriage. Abbass could have easily stolen the movie but wisely – and generously – toned things down, allowing Faour to take center stage. In the end, I think that was a better move for the film overall.

Most of the other roles aren’t as richly written as the two sisters, although Shawkat is compelling as the Americanized Salma and her conflict with her mother should resonate with anyone who has been privy to mother/daughter conflict. I would have liked to see Fadi, Nabeel and the principal get a bit more to work with, but this still remains a good first effort and serves notice that Dabis could be a director to keep an eye out for.

WHY RENT THIS: Nice performances by Faour and Abbass illustrate the difficulties Palestinian Muslims face in post-911 America as well as in their occupied homeland.

WHY RENT SOMETHING ELSE: Some of the supporting characters seem to be very artificially drawn and cliché.

FAMILY VALUES: There’s a little bit of bad language and some teen drug use, but otherwise I wouldn’t hesitate to let mature teens check this out.

TRIVIAL PURSUIT: The movie was filmed in Winnipeg where there are no White Castle restaurants; the White Castle corporate offices shipped out the supplies for one there, creating a set so realistic that locals kept trying to order from it, even though no food was ever sold there.

BOX OFFICE PERFORMANCE: $2.2M on an unreported production budget; judging on the way the movie looked, I’d guess it made some money.