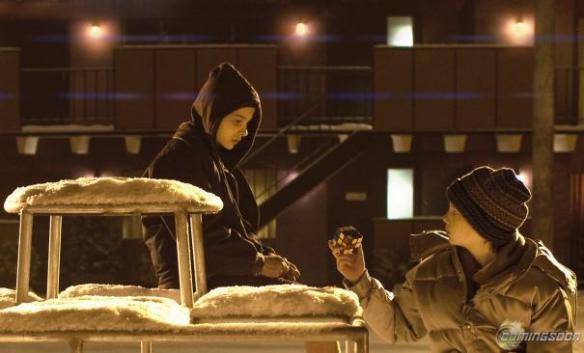 Owen demonstrates the proper way to mess up a Rubik’s Cube to Abby.

As children, we dread the monsters, the ones that emerge from our nightmares and hide in the shadows of our room. As we grow older, we learn there are no monsters, but some children know better. There are all sorts of monsters.

Owen (Smit-McPhee) is a young boy growing up in New Mexico in 1983. He’s 12, small for his age, living in a run-down apartment because his parents are in the middle of a bitter divorce, which has led his mother (Buono) to alcoholism. As many emotionally traumatized boys are, he is fragile, aloof and a little weird. He is bullied at school by Kenny (Minnette), a boy much bigger than he.

To combat his loneliness, he binges on candy (particularly Now and Laters, his favorite) and hides the wrappers in the snow. He hangs out in the deserted playground of the apartment and watches the inhabitants through a telescope; a young fitness freak, a romantic couple. He has a small knife that he sometimes whispers threats to his tormenters with – never face to face. He is alone and terrified.

One night, he sees a young girl and her father move in to the apartment next door. The next day, the windows are all covered with cardboard, which seems a bit unusual but with many daysleepers in the complex, not that unusual. One night, the little girl comes out to visit with him on the playground. Her name is Abby (Moretz) and she can’t be his friend. This she announces in a sad but firm voice.

However, they do become friends. Abby has a thing for puzzles and Owen has a doozy – the Rubik’s cube. A very strong bond develops between the two of them, despite the warning of Abby’s father (Richard Jenkins) to stay away from him. Soon, Owen is finding the strength to stand up to those who are bullying him.

However, Abby is not what she seems. As they grow closer and a series of unexplained murders bring the police in the form of a single, unnamed dogged detective (Koteas), Abby eventually reveals the truth – she needs blood to survive. Yes, that would make her a vampire.

This is based on the acclaimed Swedish film Let the Right One In which in turn was based on a novel of the same name. Many who saw the first film cringed at the idea of a Hollywood version. Cringe no more; this is nearly as good as the original. Reeves captures the feeling of despair and hopelessness that was the backdrop to the first movie, and adds the dread and sense of something really terrible about to happen that was the original’s spice.

It helps that he has two strong juvenile leads to carry the movie. Moretz has made a name for herself with astonishing turns in Kick-Ass and (500) Days of Summer. She is clearly an actress of immense talent and should have a satisfying career ahead of her. Smit-McPhee, who was also in The Road, captures the innocence and sadness of his character very nicely, retaining the kid aspect in a role that lesser actors would have tried to make more precocious.

The adult actors tend to be moved off to the side, but Jenkins does a noble job in a thankless part, while Koteas continues his strong work of late. However, it is not so much the actors but the atmosphere that will get your attention. The movie is set in the dead of winter and the bleak landscapes and frigid temperatures contribute to the overall mood, which I will admit starts to get to you after awhile.

Still, it’s a great setting for a horror movie and this is a particularly well-written one. There is just enough gore and horrifying violence to satisfy the horror fan, and enough character development to satisfy the cinephile. I happen to fall into both camps, so this movie was like catnip to me. It’s not quite as good as the Swedish version, but it’s so close that the differences are negligible. It’s well worth your Halloween dollar.

REASONS TO GO: A vampire movie that will give Twilight-haters a reason to rejoice. Strong performances from all of the leads.

REASONS TO STAY: The dismal atmosphere can get overly oppressive.

FAMILY VALUES: There are some violent, disturbing scenes and a fair amount of foul language. In addition, there’s an unexpected sexual situation; this is very much for older teens and above only.

TRIVIAL PURSUIT: The word “vampire” only is spoken once in the movie.

HOME OR THEATER: While some of the moody forest scenes benefit from the big screen, overall I’d say the movie is just as effective on your own television or computer screen.