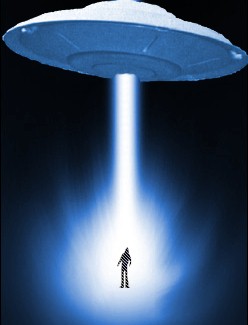 The night was still and empty. Even the usual sounds of the night from the local fauna had gone hushed, as if waiting for something, something terrible. The house sat alone in the woods, it’s occupant asleep and at peace, snug and secure in his bed. Outside, all was dark, only the twinkling stars and a crescent moon producing any illumination at all.

The darkness was split by a shaft of light suddenly, so bright that you couldn’t look in it directly. The birds all flocked, flying as far away from this danger. The home was bathed in the light, brighter than daylight. The shadows cast in it were long and sinister. Then some of them began to move.

They moved towards the front door, shadows without substance. The front door swung open slowly, of its own accord. The shadows melted into the porch which itself was in shadow, and disappeared into it.

Inside the house the figures became solid, bipedal, and not of this world. There were four of them and they were all grey, a featureless blob where their faces should have been. The arms were too skinny, too long with too many fingers. They moved in a lithe manner, stealthy and quiet, but striding with purpose, confident in their own dominion over a place they were trespassing in.

Unerringly they ascended the stairs towards the bedroom, the door to which obligingly swung over. The room was completely illuminated from the outside. One of the figures, apparently the leader, gesture at the bed in which the home owner, a young man, slumbered. One of the subordinate grey ones removed a slender rectangular item from a tool belt it wore, then walked up to the bed and stood next to the sleeping resident, who was beginning to stir. The grey one held the tool up to the side of the head of the awakening man and immediately he fell back asleep. The tool-holding grey one nodded at the leader who motioned to the other two grey ones in the room. They swept over to the sleeping man and pulled back the covers.

One of them pulled out a silver box with several buttons and dials on it. He pointed it at the man and pressed a button. The sleeping man began to float off the bed, the laws of gravity temporarily rescinded. The leader of the grey ones nodded and walked out of the bedroom. The others followed, including the sleeping man who floated along, the one grey one keeping his silver box pointed directly at the sleeping man.

They went down the stairs and out the front door, which obliged them by shutting itself behind them after they’d passed through. The five figures walked out of the shadows into the bright line where they shimmered and then disappeared. A moment later, the bright light shut off as suddenly as it appeared. The night returned back to normal.

The four grey ones and the sleeping man appeared onboard a spacecraft, a surprisingly large one that hovered undetected in the sky. Once they were aboard, the leader of the grey ones led his team into a room off to the side, a laboratory. Inside, the grey ones went into a flurry of activity. The sleeping man was strapped to an examining table in the center of the room. Instruments of all sorts were wheeled in and set up around him. One technician removed the bedclothes from the sleeping man, leaving him naked. He took the clothes and set them in a folded pile in a cabinet.

After a short time, the room was ready. All of the technicians swept out of the room except for one who went to the outside wall and touched a button recessed in the wall. A field of glittering light appeared around the slumbering man. The remaining technician nodded to the leader of the grey ones and made his way out of the room too.

The leader touched a button on his suit and on the featureless head a face appeared. At least, an approximation of one; it was very different than the face on the sleeping man. The eyes were much too big, for one thing, the nose too small. The mouth was also too small, the skin tone too pale. While it was a face, it was an alien face.

New technicians appeared, all without faces. One of them had the same slender rectangular tool the one who had put the slumbering man to sleep had held; he pressed a button and the sleeping man’s eyes slowly fluttered open. At first his face was filled with confusion which after a moment turned to fear. He struggled to get out of the examining table but he was unable to.

All of the technicians passed through the glittering field and went to man various machines in the room. One of the technicians wielded a menacing looking machine with an arm at the end of which was a slender cylindrical probing device. He touched a button and a needle extended from the probing arm. The arm itself swung towards the man who was screaming, and then the needle snaked out and plunged into the arm of the man. He made a hideous noise but in a few moments his struggles lessened, but the fear on his face was undimmed. He remained awake as the other technicians went to work, scraping skin samples off, exposing his flesh to fire and ice.

The leader watched all of this impassively. A subordinate walked up to the leader and handed him a hand held data pad, which the leader stared at for a moment, reading the information on  the screen, then he touched a finger to the screen and handed it back to his subordinate, who stood a moment watching the activity in the examining room.

“I’ve never understood why we need to do this,” said the subordinate after a few moments in a language not spoken anywhere on this planet. The leader glanced at him and said nothing for a moment, then said “What do you not understand? This is part of our mission.” The subordinate seemed to be emboldened by this and said “We have taken dozens of these creatures and we conduct the same tests. The results are all very similar with very little deviation. I think that we are simply obtaining information that we already have.”

The leader nodded. “So you question the redundancy, is that it?” The subordinate nodded. The leader said “We must discover what the range of their tolerances is. We are looking to see how many and what kind of differences there are between them. We must learn all that we can about them in a short amount of time; we can’t hold on to them long, or else we may be detected and that would be disastrous.”

Just then another technician wheeled in a large medical device. One of the others used the silver box to undo gravity again and the formerly sleeping man was made to float in a vertical position. The new device was positioned behind the man, and a probe extended from it. The probe slowly made its way to the rectum of the man and inexorably slid inside him. The man began to scream anew in a terrible, hopeless voice.

The subordinate gestured at that. “Why must we probe these creatures there? Obviously they find it very painful and distressing.” The leader gave him a sideways gesture. “We need to examine their nutrition and what they consume. As for the pain and distress, it will be wiped from their memory and it will be as if they had never suffered.” The subordinate shook his head. “I still find it cruel.”

The leader turned to him and for the first time seemed to be angry. “Do not forget your place, officer. I am the leader of this mission and I will complete it as we have been ordered to do. This is a violent and aggressive species; they are also highly intelligent and capable of developing interstellar technology. If they do, we may one day come into conflict with them and it is in the interest of our survival as a species to know as much as we can about a species that may one day become our enemies.”

The subordinate bowed his head. “I’m sorry leader; I did not mean to question your authority. I just wonder if we are not being unnecessarily cruel to a species that might also potentially become our friends.” The leader nodded. “You make a compelling point. I do hope we become friends with them; they have much to offer us as we have much to offer them. We must err on the side of caution however; far too much is at stake for us to take chances with our very survival.” The subordinate nodded. “I thank you for educating me, leader. I will not question you again.”

The leader actually made what approximated a smile. “Do not feel bad. I want my officers to question everything; it makes them more effective as officers. What we do isn’t  easy, and your compassion reflects well on you; use that compassion as a moral compass but never forget why we do what we do and what responsibility we hold in our hands. If it someday comes to our survival or theirs, the information we gather now may make the difference. It is important work we do.”

The subordinate nodded, “Yes, sir. When the technicians are finished examining the subject, will you join the shore party to return him to his dwelling?” The leader considered a moment then shook his head. “No, I am weary. It has been a long day and I shall retire. However, once the creature is returned to its home, order the navigator to take us out of order to a communications point. We will need to transmit our data to Houston. After that hopefully we can return home. I miss the Earth.”

The lieutenant smiled. “As do we all, sir. We’re overdue for shore leave.” The captain smiled. It was a two month hyperspace journey from the alien star system to Earth, but it will be much easier for the crew knowing they’ll be seeing their families at the end of the trip. They were all weary, but he knew his crew would power through it. He walked away for his stateroom, whistling Bowie’s “A Space Oddity” as he went. Just another piece of home in an alien place.