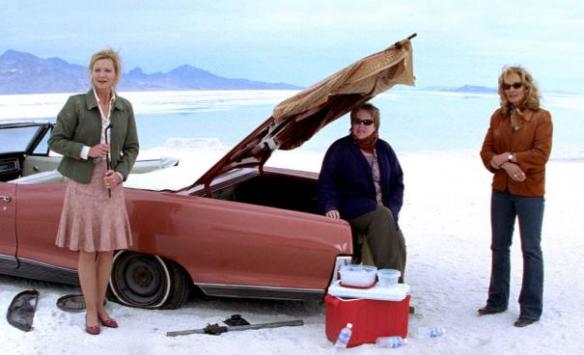 Three chicks on a road trip. Daughters, lock your fathers up!

Women of a certain age tend to be marginalized by our society, particularly if they are without husbands. That’s especially true of Hollywood, which tends to depict older women as raging sex addicts, uptight old fools or complete loons.

Joe had specified to Arvilla he wanted his ashes scattered in various places around the United States but shrill Francine wants his ashes buried next to her mother at their Santa Barbara estate. Arvilla is inclined to decline but Francine presents her with an ultimatum; bring the ashes to California or be evicted from her home.

Arvilla, not wanting to be 50-something and homeless, decides to take the ashes to Santa Barbara. She engages her closest friends Margene (Bates) and Carol (Allen) as moral support. Margene is a free spirit, one with an enviable love of life quotient. Carol is more uptight, a strict Mormon. In fact, all three women belong to the Church of Latter Day Saints, which is how they conceivably met. To the movie’s credit, this isn’t dwelled upon so much as presented as a facet of their personalities.

Originally set to fly to California, Arvilla abruptly decides to take one final road trip with Joe, which Margene heartily endorses and Carol quietly disapproves of. Along the way they visit the Grand Canyon and Las Vegas, meet a truck driver (Skerritt) who becomes seriously infatuated with Margene and are rescued from a flat tire on the Bonneville Salt Flats by Bo (Rasuk), a hunky hitch-hiker who gives the ladies a chance at being sweetly ribald.

Most road movies don’t involve grandmotherly sorts, but this one is a little different. Not often do you see women of the Red Hat Society generation portrayed as road warriors, but here you have one. It doesn’t hurt that three of America’s premiere actresses are riding in that 1966 Bonneville. Lange is the centerpiece of the movie, grieving without getting overly emotional although her loneliness is palpable at times. Ditto for Bates, who hides that loneliness with exaggerated bonhomie. Allen, however, might fare the best of all of them as an uptight woman whose life is ruled by strictures that even she feels troubled by at times. She sneaks sips of coffee when she thinks nobody is looking but outwardly at least is the perfect wife and mother of her faith.

The movie can be a little bit too bland in places and other than between Francine and Arvilla, there’s almost zero conflict. We wind up just along for the ride, pleasant as it might be. I would have preferred to examine the Francine-Arvilla dynamic a little more closely; her hatred for Arvilla can only be ascribed to Joe’s temerity of re-marrying after his first wife died, but she seems hell-bent on hurting Joe after his life was over as well; her anger towards her father is never adequately explained, although it may well stem from the same source as her anger towards Arvilla. The shame of it is that Baranski is also a terrific actress and her one real scene with Lange early on in the movie is a showstopper; I would have liked to have seen more of the two together.

The movie got tepid reviews for its somewhat brief limited run, which seems a little bit harsh to me. I thought the movie was solidly entertaining, particularly the performances of Allen, Bates and Lange as well as the supporting turns of Skerritt and Baranski. While the movie never explores the unpleasant side of bereavement (being more about the friendship between the three women), it at least is inoffensive at worst. I’d elevate it slightly higher than that given the talent in front of the camera.

WHY RENT THIS: The three leads are as good as any actresses in Hollywood and watching them together is a hoot. The movie has a sweet charm at its center.

WHY RENT SOMETHING ELSE: At times the movie is a little vanilla, and some of the relationships (particularly Francine and Arvilla’s) aren’t explored adequately.

FAMILY VALUES: There is some mild cursing and a bit of sexual innuendo. This is generally safe for all but the youngest audiences.

TRIVIAL PURSUIT: The car used in the film was a 1966 Pontiac Bonneville. The chrome rearview mirror was removed so as not to show the reflection of the crew filming the movie.

NOTABLE DVD EXTRAS: There’s a gag reel and a promo video for the Red Hat Society.

BOX OFFICE PERFORMANCE: $1.3M on an unreported budget; while it’s unlikely that the theatrical release made money, chances are it wasn’t far off.