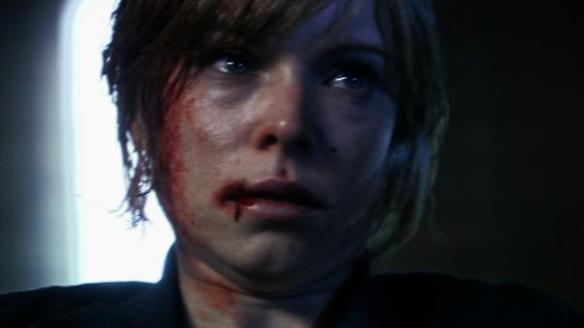 When the end of the world comes, how would you spend it? Would you want to be with the one you love to face the inevitable or would you fight for survival?

The end of the world has come to Terminus, although the people there don’t know it. Mya Denton (Ramsey) is having an affair with Ben (Welborn) who begs her to come with her to the bus station and leave her abusive husband Lewis (Bowen) behind. Mya can’t quite bring herself to do it and she goes home to her husband, who is having an argument with two friends as they watch the ball game. Suddenly, Lewis grabs a baseball bat and begins beating one of his friends to death with it. Batter up.

This section, titled “Transmission I: Crazy Love” was directed by Brucker. Up next is “Transmission II: The Jealousy Monster” directed by Gentry. Mya and Lewis’ friend Rod (Ngaujah) try to get away but Rod has been infected by the signal and causes their car to crash. Nice guy Clark (Poythress) tries to make sure Mya’s okay but she doesn’t trust anyone so she warns him off and makes for the bus station on foot. Meanwhile Clark’s neighbor Anna (Christian), who is throwing a New Year’s Eve party, is distressed over having had to murder her husband who was trying to strangle her. This has driven her over the edge and she thinks that Clark is her husband. Lewis arrives, completely enraged and hallucinating badly, believes that Anna is Mya. Jim Parsons (McKnight), an invited guest, arrives and believes he wants to get laid. Lewis kills everybody just to make things less confusing.

The final section is “Transmission III: Escape from Terminus” and is directed by Bush (by a process of elimination). In this portion, Ben escapes to try and find Mya and Lewis heads over to try and find her first, as the city crumbles into chaos. What state will she be in when they find her?

Each of the three sections is done in a different style; the first is a kind of indie drama, while the second is black comedy; the third is action packed. It can get a little bit jarring moving from section to section, but mostly, the actors all remain the same.

While these are essentially unknowns, the acting is pretty decent enough – I’ve seen worse with bigger budgets. The effects are essentially bargain basement as you might guess, but there are so few of them that mostly it’s about fake blood and make-up wounds which are relatively inexpensive compared to CGI. Everything else is just a matter of planning and luck.

Most indie horror movies have a tendency to either be too cerebral to be truly terrifying, or too gory to be terrifying (one gets numbed to gore pretty quickly). The Signal finds the right balance and ends up being terrifying. While the concept of signals sent over the airwaves to cause mass psychosis is nothing new, this is one of the best versions I’ve seen. It’s equally irreverent as it is relevant to our use of technology and the dangers of being too reliant on it. If you’re looking for a scare flick you haven’t seen yet to while away a Friday night, this one might be for you.

WHY RENT THIS: As indie horror films go, this is a gem. Less claustrophobic than Pontypool and certainly a little wackier.

WHY RENT SOMETHING ELSE: Three separate directors directing separately make for some interesting style differentials, but this can also be unnecessarily distracting.

FAMILY VALUES: A lot of bloody, gory violence and a good deal of filthy language. There’s some brief nudity and sexual innuendo as well.

TRIVIAL PURSUIT: The fictional city in the film is called Terminus, which was the original name of the city of Atlanta, Georgia where the movie was actually filmed.

NOTABLE DVD EXTRAS: There are several online viral videos that marketed the movie before its limited release, including the bloody results at a television station when the signal first arrives as well as a cheerful family picnic amidst the carnage and mayhem of the apocalypse. Two minutes of the short The Hap Hapgood Story were aired during the film; the entire ten-minute short is thoughtfully provided here. Finally, you can see the signal itself, eight hours and 24 minutes worth, if you really want to.

BOX OFFICE PERFORMANCE: $371,568 on an unreported production budget; while there’s a chance the project made money, it probably didn’t.