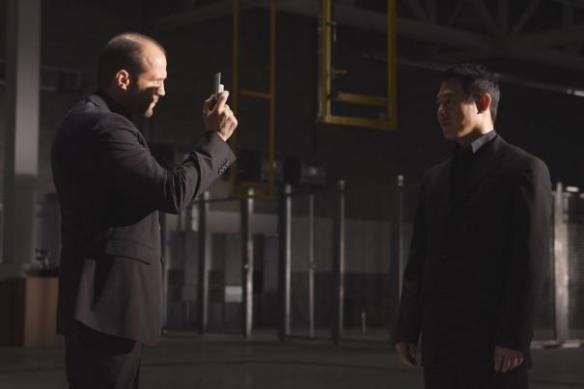 Jason Statham and Jet Li prepare to face off in the tension-free climax.

War is an American martial arts movie with a pair of FBI agents – Crawford (Statham) and his partner Lone (Chen) who are monitoring a Triad smuggling operation into San Francisco when all Cleveland breaks out. Gunmen have come on the scene and turned it into a war zone. Lone wants to take a closer look, but the more cautious Crawford wants to wait for backup. Still, a closer look might not be a bad idea, so they go in and encounter a great deal of carnage. When Crawford spots a single bullet casing, he realizes that this is the work of the near-legendary assassin Rogue (Li), who was trained by the CIA and then turned on his handlers, becoming a mercenary for hire. By this time, however, it’s too late – Rogue shoots Crawford and is preparing to deliver the coup de gras when Lone rescues Crawford and shoots Rogue in the face, apparently killing him.

But of course, in an action movie, even people who are shot in the face don’t die, and a none-too-pleased Rogue pays Lone a visit, murdering his entire family and setting his home ablaze. Crawford is devastated by the fate of his partner.

Three years later, Crawford has obsessed over bringing the elusive Rogue to justice, but Rogue has fallen off the radar. His obsession has cost him his own marriage, as his wife (Roth) is happy to remind him. Still, even without Rogue, Crawford has a great deal to keep him busy. In addition to the Triads, run by Chang (Lone), the Japanese Yakuza have moved into the area, whose boss is the Japan-based Shiro (Ishibishi) who sends his daughter Kira (Aoki) to prepare his American operations for his arrival.

Chang and Shiro are blood enemies; Shiro engineered the massacre of Chang’s family in Hong Kong and stole millions of dollars of art and artifacts from their home, all of which he has sold save for two ancient miniature statues of horses, made of gold. Shiro wants to sell these last two items as well, but nobody in Asia will buy them now that Chang has once again risen to prominence. So, he decides to sell them in America. Unfortunately, Rogue – now back on the scene – has apparently switched sides, having left Shiro’s employ for Chang’s. This act alone sets off a chain of events that leads to an all-out war between the Yakuza and the Triad, with many innocents caught in the crossfire. For Crawford, none of this matters – his chance to administer final justice to Rogue is at hand.

Where to begin here? This is a completely wasted opportunity. Statham and Li are two of the most charismatic action stars today, but most of their action sequences require little of them but to snarl and shoot. The script is a hodgepodge of action thriller cliches and forced twists and turns. The only real interesting twist here is Rogue’s identity (revealed in the final reel); the ending is terrible and essentially reveals that all the drama evolved from one of the main characters’ completely out-of-character actions. This plot point is so preposterous that you can only throw popcorn at the screen and boo or hiss, or whatever it is you do to reflect your displeasure at movie theaters.

Statham and Li were both coming off of terrific performances, Li in Fearless and Statham in Crank, but they seem oddly flat here. The whole movie is building for their climactic encounter, but when it finally comes, it’s anticlimactic. There is almost no fighting nor is there any chemistry. Interestingly enough, the two would spend time on the same side in last summer’s The Expendables.

Atwell is making his feature debut; previously he directed music videos and quite frankly, he has problems keeping the story flowing over the length of the film. The whole subplot involving Benny (Guzman) and the plastic surgeon (Rubinek) is superfluous and unnecessary, much as having both “superfluous” and “unnecessary” in the same sentence is. While on the plus side he doesn’t have the tendency of most music video directors to use endless quick-cutting and surreal or symbolic passages, he doesn’t really show he has an aptitude for action.

That’s not to say that the movie is totally without merit. There are some nice sequences with Statham and his FBI team, and Aoki makes for a menacing baddie but for the most part, this is just wasted opportunity.

WHY RENT THIS: Some nice sequences. Lots of bullets flying.

WHY RENT SOMETHING ELSE: Little or no chemistry. Plot is too cliché or overloaded with twists. Ending is preposterous. Soundtrack is barely listenable.

TRIVIAL PURSUIT: The title for the movie was originally Rogue which Screen Gems changed to avoid confusion with a killer crocodile movie that Dimension was releasing more or less at the same time.

NOTABLE DVD EXTRAS: The Blu-Ray contains a trivia track and a gag reel.