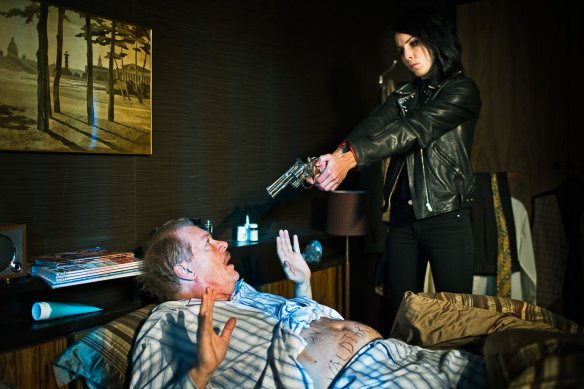 A couple of old friends get re-acquainted.

There are those of us who have causes and are passionate in pursuing them. The trouble with tilting at windmills, however is that often we find ourselves face to face with our own demons – and some of those demons have wicked claws.

Lisbeth Salander (Rapace) is on the run following the events of The Girl with the Dragon Tattoo. She has leased out her apartment to an attractive woman named Miriam Wu (Garbi) and has paid a visit to her old abuser Bjurman (Andersson), threatening him with his own gun. When that gun is used to murder him later, as well as two reporters for a left wing magazine, Salander is framed for the crimes.

It so happens the two reporters worked for Millennium, the magazine published by Mikael Blomkvist (Nyqvist) who doesn’t believe for a second that Salander murdered his people. Blomkvist decides to follow the investigation they were working on into a ring that brought Russian girls into Sweden to be used as sex slaves for wealthy Swedish men.

As corruption at the highest level of government begins to resist the investigation, Salander who is doing some looking into of her own discovers that her own past is very much a part of the murky shadows involved in these crimes. As Lisbeth and Mikael find their investigations are beginning to point to the same place, Lisbeth’s past threatens to collide head-on with their present which may leave either of them with no future.

The second book in the Millennium trilogy is definitely on the transitional side. You get a sense that events are being set up for the third installment (and they are). Alfredson takes over from Niels Arden Oplev who helmed the first movie, and lacks some of the visual style of the first. It also lacks the intensity and stress level of the first movie. It’s certainly more laid-back in tone, with more exposition and less action.

Still, the movie is redeemed by Rapace who continues to make Salander one of the most interesting characters to come along onscreen in decades. We get to see much more of her – she and Nyqvist barely appear onscreen together and only then near the end of the film. In many ways this is very much her show and while Nyqvist is a capable actor, his role is certainly secondary to Salander’s as it is in the book.

Purists may again wish the movie hewed a little closer to the book, but of course that’s not really possible – as it is the movie runs a little long to me. There are some significant plot changes but by and large the book and the movie are similar enough to get by.

There are a lot of complexities in the plot, with lots of subplots running through the movie. That’s both good and bad. Good in that it makes the movie more of a thinking person’s movie – and God knows we need more of those – but also it makes the movie unnecessarily convoluted. While those plotlines are necessary, still it can make the movie feel cluttered at times. However, in the defense of the filmmakers, I’m not sure there’s a way around it without either creating a fourth movie or making the third a lot more confusing.

Still, while this movie isn’t quite as good as the first, it’s still miles ahead of most of the competition. This is still a well-written and taut thriller and while the ending leaves it feeling a mite unfinished, that’s often true of most second films in a trilogy anyway. There are some definite gotcha moments and the performances continue to be strong. It left me eager to see the third and you can’t ask much more than that from a second movie in a trilogy.

WHY RENT THIS: Rapace continues to impress as Salander. Taut and well-written.

WHY RENT SOMETHING ELSE: A little bit blander than the first. Too much exposition and not enough action.

FAMILY VALUES: More of the same – brutal violence, much of it directed at women. Sexual violence including a rape, a bit of nudity and a few bad words scattered here and there.

TRIVIAL PURSUIT: This is the only book and film in the trilogy where the Swedish title is the same as the English one (The Girl with the Dragon Tattoo was titled Men Who Hate Women in Sweden and the third movie The Girl Who Kicked the Hornet’s Nest was titled The Castle in the Sky That Was Blown Up in Sweden).

BOX OFFICE PERFORMANCE: $67.1M on an unreported production budget; the movie was very likely a hit.

TOMORROW: The Girl Who Kicked the Hornet’s Nest