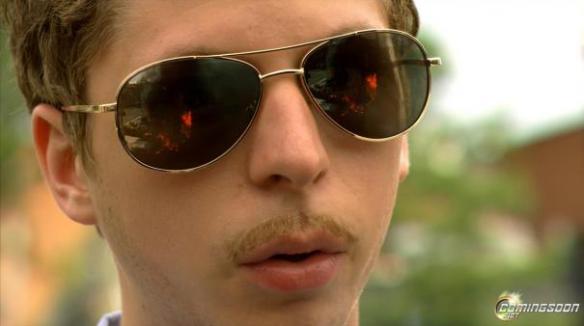 Nick Twisp (Cera) is a teenager in Oakland with the kind of family situation that makes you want to pull every sensory organ out of your head and stomp on them. His parents are divorced; Mom (Smart) has taken up with an unpredictable druggie (Galifianakis) who has run afoul of a group of sailors whom he sold a car to. He has run so afoul that he has thought the better part of valor was packing up his girlfriend and Nick and moving them to a trailer park in the middle of nowhere, California. Here he meets Sheeni (Doubleday), a young girl as quirky as he, someone who knows who Jean-Paul Belmondo is, and knows what it means to be hip in a conformist world.

His dad (Buscemi) is compensating with a much younger girlfriend (Graynor) and Nick prevails upon him to move into Sheeni’s complex, getting himself thrown out of his mom’s household for good measure. However, Sheeni doesn’t think Nick is dangerous enough. Nick invents an alter-ego (also Cera) with a wispy moustache, a smoking habit and who tends to give really bad advice that soon has Nick in trouble with the law, with his family and with Sheeni.

This is one of those coming of age stories (based on a novel, of course) that seems to have the idea that the more twisted and mixed up you are, the more interesting you become. The movie sat on the shelf for more than three years as Cera’s star grew brighter before it finally got a release. Even so, it milks the kind of character Cera has made a career out of playing; young, fey, sensitive, good-hearted and somewhat spineless. He has an easy manner of quipping and yet never seems to turn that intelligence into making his world a better place.

Doubleday makes a pretty nice romantic lead, except she doesn’t really pull off the quirkier aspects of her character well. She comes off therefore as a girl pretending to be hip rather than being actually hip, which matches up poorly with Cera’s character, who has the outer appearance of being hip without the inner self-confidence to pull it off.

Still, the movie is funny where it needs to be and quite frankly this is one of my favorite performances by Cera. It doesn’t hurt that he has a wealth of comic actors to work off of – from the established (Willard, Buscemi, Place) to the up-and-coming (Galifianakis, Graynor, Long – as Sheeni’s brother – and Kalyan, as Nick’s ethnic friend who may be even more of a dork than he is). The cast for the most part perform admirably, although some of the storyline just goes into ridiculous mode from the second half of the movie onwards.

It’s not a bad movie at all, and despite my low regard for hip indie coming of age movies about quirky teens who are hipper than thou, managed to reel me in thanks to some nice supporting performances (particularly from Buscemi, Willard and Galifianakis) and some good, solid laughs. What more can you ask from a comedy?

WHY RENT THIS: Well-written dialogue and some funny situations. A very strong supporting cast comes up aces.

WHY RENT SOMETHING ELSE: Michael Cera is far too one-note an actor to be playing two characters.

FAMILY VALUES: There’s plenty of foul language, quite a bit of sexual content and some drug use.

TRIVIAL PURSUIT: The man who sells Jerry the camper is none other than Michael Collins, the Apollo 11 astronaut who was in the command module while Armstrong and Aldrin got all the glory.

BOX OFFICE PERFORMANCE: $19.7M on an $18M production budget; the movie was a flop.