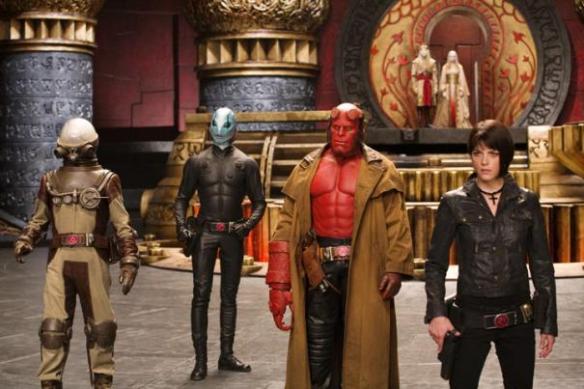 How about a little eye candy little girl?

We’ve seen in movies like An Inconvenient Truth and Wall-E cautionary tales of what happens if we continue to abuse our environment. The end of mankind on Earth may come in an unending pile of garbage in the latter, or in the inability of our planet to sustain us in the former. Of course, what nobody realizes is that our ecological irresponsibility is pissing off the faeries.

That’s right, the races of myth and legend – the trolls, faeries and so on – have been living underground as the result of a treaty imposed on them by humankind  for eons and they are heartbroken at what we’ve done to their planet. One of them – Prince Nuada (Goss) is a little bit more than heartbroken. He’s cheesed off and has decided to resurrect an indestructible Golden Army that will eradicate humans from the Earth if he’s successful.

Of course Hellboy (Perlman) and his cohorts Abe Sapien (Jones), a half-fish half-man telepath, Liz (Blair), a pyromancer, and Johann Krauss (Dodd, voiced by McFarlane) who is more or less a ghost inhabiting a mechanical body, object to this in the strongest possible terms. They do so with the assistance of Princess Nuala (Wilson), Nuada’s twin sister whom Abe has fallen for like a salmon in spawning season.

The group will battle lethal tooth fairies, gigantic squid-like demons, a very dangerous Troll Market and finally the Golden Army itself to save mankind from the mad Prince. There are times that Hellboy has to wonder if we’re really worth saving.

Del Toro, who did this movie immediately after the Oscar nominated Pan’s Labyrinth, is one of the most visually striking directors on Planet Earth. He has an imagination and a vision that is extraordinary and singular; the result is that Hellboy II: The Golden Army is one of the most visually intriguing movies of the past five years. Not only is Mike Mignola’s comic book brought to life, it’s actually fleshed out into a world even Mignola couldn’t adequately create. The movie has an epic quality to it as a result.

Perlman has made Hellboy a relatable character, one who has been forced into isolation for his demonic background and whose many idiosyncrasies rather than make him a caricature serve to make him more human than his visage would allow. While he is less a center of focus than he was in the first film, he is nonetheless a major reason why this movie works so well.

The supporting cast fares pretty well. Tambor, as the bureaucrat who runs Hellboy’s BPRD, is solid and witty, while there is a melancholy element in Goss’s villain performance which makes him stand out among a galaxy of comic book villain who really are more or less all the same. Jones as the lovelorn Sapien gets to voice a character he only played physically in the first movie (David Hyde Pierce gave the original Abe Sapien voice) and does it well. Blair’s character is a little less interesting here than in the first one but she fills it out nicely.

The story here is simple enough on the surface, but there are a lot of complications and it gets a little muddled, particularly near the end. That’s all right; every frame of this movie is an absolute gem, something that you’re going to ooh and ahh at for generations to come. The movie pulled disappointing numbers, to my mind mainly because it was exiled to an August release date in a year where blockbusters limited the landscape and wound up getting trumped by the better-promoted Journey to the Center of the Earth. It’s a shame audiences didn’t get to discover it on the big screen – it was as amazing a theatrical experience as I had that year, and to my way of thinking the kind of movie that should be seen in a movie theater and not streamed to a laptop. Some movies just need to overwhelm you, and this one is definitely one of those.

WHY RENT THIS: Serious eye candy. Del Toro is one of the most visually imaginative directors working today.

WHY RENT SOMETHING ELSE: The story is a bit muddled.

FAMILY VALUES: There is a little bit of foul language but mostly there’s a lot of violence and fantasy/sci-fi action.

NOTABLE DVD EXTRAS: The 3-Disc DVD includes a featurette on the Troll Market and one of the most informative and detailed making-of documentaries ever. An animated comic serves as an epilogue on the movie that fills in some blanks you didn’t even know were there. The Blu-Ray features a BD-Live chat with del Toro that is quite enlightening on projects he was working on (and is no longer) and the future of the Hellboy franchise. There’s also an interactive feature that allows you to pull still pictures from the movie and create a comic book, complete with word balloons which is a very little fun feature to play with.