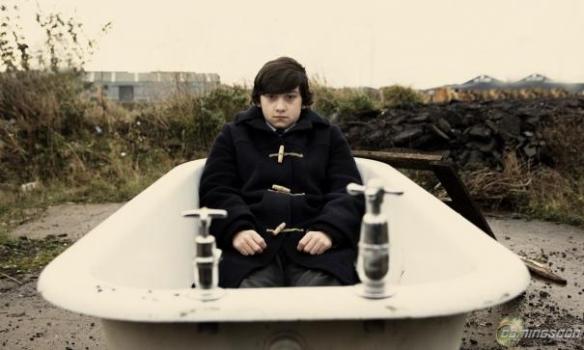 Oliver Tate, like many teens, is a bit fuzzy on bathing.

We are for the most part the stars of our own ongoing movie, and often we see ourselves in a different light than how we are actually perceived. The younger we are, often the more pronounced this divide is.

Oliver Tate (Roberts) lives in the Southern Welsh coastal town of Swansea (an amusing note from Oliver preceding the credits on the American release reinforces this) as a 15-year-old boy convinced of his own intelligence and popularity. He imagines a national mourning at his untimely death, and a resurrection to delighted teenage girls, prompting a miasma of hormonal bliss.

When confronted with actual female attraction, in the form of the much cooler and cynical Jordana (Paige) who also has a thing for lighting fires, he adopts a deer in the headlights expression, leading to a kiss which he learns later is meant to make her ex-boyfriend jealous. It backfires and the two are badly bullied with Oliver getting beat up when he gallantly refuses to say publically that his erstwhile lady is a slut. She walks him home and kisses him for real, leading Oliver to determine that she is now, officially, his Girlfriend (capitalized on purpose here).

But all is not sunshine and mince pies. Oliver’s parents are slowly drifting apart, a malaise that has led to a lack of sex (which the ever-spying Oliver determines by the level of the dimmer switch in their bedroom). That malaise is exacerbated by the arrival of new next door neighbor Graham (Considine, in a role that might have gone to Colin Farrell in a bigger budget production) as a would-be new age guru, who also used to be his mom’s Boyfriend. Oliver’s mum Jill (Hawkins) seems disposed towards re-fanning those flames, attending Graham’s lectures slavishly while her husband Lloyd (Taylor) diffidently drowns in depression, a marine biologist sinking into an ocean of emotional dissonance.

Thus Oliver decides he must reverse this trend because a divorce would essentially inconvenience him. However, Jordana is undergoing a crisis of her own – her mum (Walters) is desperately ill and may not survive the surgery she is about to undergo. Oliver decides that Jordana would benefit by his absence (and Oliver is more wrapped up in his own drama in any case) and deserts her at her most crucial moment. Can Oliver reconcile all the relationships around him that are crumbling?

This isn’t your typical teen coming of age movie, at least not by Hollywood standards. Despite being mid-80s set (and with all the pretension that implies), there is an intelligence here that is sorely lacking in the big studio teen movies. The kids here, while they operate essentially independently of their families (as kids that age often do), are still connected with them and are certainly not smarter than their parents although they fancy themselves to be.

Oliver is genuinely fond of his parents and they of him, which is refreshing – the relationship between Oliver and his folks is a complicated one as parent-teen relationships usually are. None of  the protagonists are perfect; they all are flawed in believable ways, from Lloyd’s inertia-challenged existence to Jill’s indecisive neediness to Oliver’s own search for his own niche and his teen-fueled arrogance.

Oliver himself is so prone to doing unintentionally cruel things that at times you get right angry at him until you think “he’s only a boy.” That is the underlying truth about Oliver. His inexperience and his lack of empathy often motivate those cruelties but if you look deep enough, he’s a decent young lad with the potential to be a good man someday. Roberts, whose narration has all the crack-voiced earnestness of a teen trying to fill an adult’s shoes before he is truly ready, is brilliant here.

Hawkins and Taylor, both veterans of English film and television, make a perfect couple. Both on the mousy side, both intellectual and both somewhat permissive in their parental techniques, they seem on the surface to be enabling their spouse’s behaviors but they are in fact well-suited to one another and there is certainly some hope that they’ll work things out (but as the film makes clear, their relationship is on far from stable ground and could go either way). Considine provides comic relief as the libidinous guru who may be self-absorbed but also has a good deal of pain and compassion deep down.

This isn’t a movie for everybody; there are no pat answers and the ending only hints at an uneasy peace; both relationships are fragile and have much work needed to survive, and there are no guarantees that either one will. Still, Oliver for all his posturing is a character you won’t soon forget and perhaps he has enough will to carry both relationships forward. You wind up kind of hoping that he does.

REASONS TO GO: A smart teenage coming-of-age movie blows most of Hollywood’s entries into the subject, not to mention all the smug Disney Channel characters. Directed with an eye towards innovative storytelling.

REASONS TO STAY: Oliver’s incompetency in social situations can be grating at times.

FAMILY VALUES: There is a bit of foul language and some sexuality involved.

TRIVIAL PURSUIT: Ben Stiller, who co-produced the movie (and has championed it throughout its run) cameos as an actor in an American soap opera that Oliver watches early on in the movie.

HOME OR THEATER: This is mostly available in Art Houses in selected locations such as our own beloved Enzian Theater and should be seen there if possible, but at home is certainly ok if it’s not playing anywhere near you.