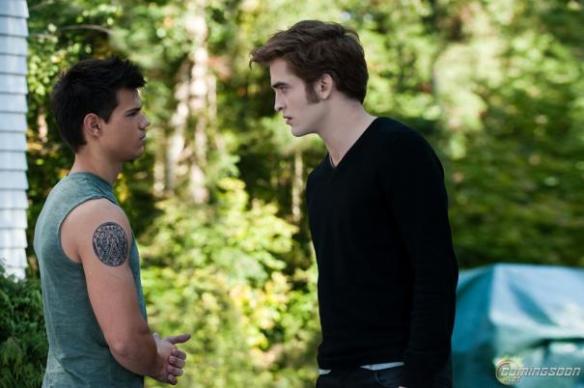 I can’t think of many teenage girls – or middle aged women for that matter – who don’t find the idea of two hunky guys fighting over her appealing. Add the additional factor that both of them are willing to give up their lives in defending her and, well, let’s just say it makes for a lot of soulful sighing.

Bella Swan (Stewart) is finally blissful. Graduation is rapidly approaching and she has been reunited with her vampiric boyfriend Edward Cullen (Pattinson) following the events of The Twilight Saga: New Moon. Not only that but he has proposed! Wedding bells are most definitely in the offing!

However, all is not roses and chocolate for the happy couple. Bella is very conflicted by her feelings for her hunky werewolf friend Jacob Black (Lautner) and Victoria (Howard) is back in town, recruiting an army of Newborns (recently converted vampires who tend to be more vicious and stronger than regular ones) to tear Bella’s face off since she blames her for the death of her boyfriend in the first movie.

In order to protect Bella, the vampires and werewolves of Forks agree to get together to hold off Victoria’s army. In addition, the vampire ruling body the Volturi, in the person of Jane (Fanning) are watching very keenly to see what happens and whether or not the Cullen family should be allowed to handle things in Forks their own way. It’s enough to make a girl break out the Clearasil, y’know?

I will admit that I was actually surprised at how much I liked Twilight. New Moon I didn’t like so much and now the third movie I have to say was so bad I almost didn’t review it. The dialogue is impossibly overwrought, and the characters act like their brains shut off because their emotions were just…too…much.

I’ve always considered the Twilight series to be the Harlequin Romance novels for teen girls and in a lot of ways that’s pretty accurate. In another era, Edward Cullen would have been played by Fabio, but in this case the trade-off might not have been so bad. Pattinson is a decent enough actor but he is given little to do but brood, sulk and glower at Lautner. There is a bro-bonding moment in the snowy mountains during a scene when they are attempting to hide Bella from Victoria (unsuccessfully – as most of their plans usually are) that comes out of nowhere, but is mercifully short. Just for the record, guys never ever EVER talk about their feelings for a girl, especially when they both have feelings for her. Even if one of them is 109 years old.

Like many writers, I don’t see why anyone would fight over Bella. Author Stephenie Meyer has mistaken willful for strong. Being stubborn in the face of common sense isn’t empowering, ladies – it’s just plain foolish. Other than occasional defiance of those who love her, Bella is more or less a weak sort, more upset over having to choose between Jacob and Edward than she is at having a vicious killer after her. She requires constant supervision and protection – yeah, just the sort of girl I want to be around.

I have in the past been guilty of damning movies in this series with faint praise and I will admit without hesitating that I’m not the target audience for this movie. However, I try to give even hormone-soaked teens and their estrogen-infused moms the benefit of the doubt. They aren’t stupid and I think if the movie had more realistic depictions of the relationships, the ladies might actually accept that just as readily – and their boyfriends might even show up too. A little more maturity might actually be good here. Too bad the studio and the filmmakers – and the author – don’t give the audience credit for appreciating a romance that actually has some depth to it.

WHY RENT THIS: Western Washington scenery is breathtaking.

WHY RENT SOMETHING ELSE: Action sequences are awkward and the movie is just flat-out poorly written, poorly acted and falls short of the other movies in the series.

FAMILY VALUES: There are some fairly intense action sequences and a bit of sexuality; should be okay for all but the youngest pre-teens.

TRIVIAL PURSUIT: Howard replaced Rachel Lefevre as Victoria due to Lefevre’s filming commitment to Barney’s Version which overlapped with this movie.

NOTABLE DVD EXTRAS: There are music videos from Metric and Muse (a couple of pretty cool bands) and a still photo gallery but that’s about it.

BOX OFFICE PERFORMANCE: $698.5M on a $68M production budget; the movie was a big time blockbuster like the first two installments in the series.