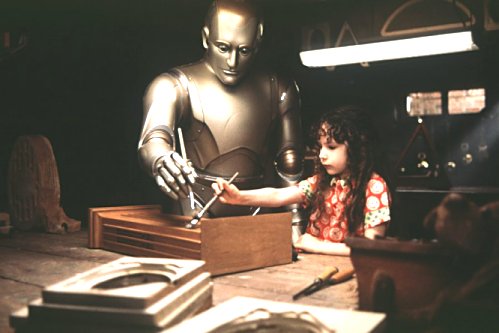 I wouldn't say that Robin WIlliams is a bit stiff in this role but...

One of the most wonderful things about Isaac Asimov’s robotics stories is that while cloaked in science-fiction terms, what he was really writing about was the nature of humanity. Then again, all the great science-fiction writers always did.

Bicentennial Man opens in 2005 when the Martin family, led by proud daddy Richard (Neill) uncrate their first domestic robot (Williams). Their youngest daughter (Eisenberg, a moppet best known for a series of Pepsi ads at the time) inadvertently names the automaton when she mispronounces “android.” Andrew’s arrival is greeted with suspicion and even outright hostility, in the form of the eldest daughter (Lindze), but he gradually works his way into the family’s heart.

After the eldest’s attempt to do away with Andrew, Richard informs his family that henceforth they will treat Andrew as a person, and his compassion leads to a miracle of sorts: Andrew begins to develop his own personality, one of gentle curiosity, quiet humor and yes, even love. Andrew chooses to explore the man in the machine, and his journey takes him 200 years (hence the movie’s title) into the future, and through several generations of the Martin family. His creators at NorthAm Robotics take a skeptical approach but eventually the uniqueness of Andrew leads to a whole different relationship between creators and creation.

Not unlike a latter-day Pinocchio, the search is not without pain and joy, but in the end it is a very human tale. Williams is more restrained than usual, but magnificent as always – what inspired casting! Of all the actors in Hollywood, he wears his humanity most expressively on his face. Although he spends much of the movie wearing what must have been an uncomfortable suit and make-up, his performance is greatly nuanced. It would have surprised me if Williams had gotten an Oscar nod given the Academy’s feelings about science-fiction in general, but one would have been richly deserved here – in my humble opinion, his work in this movie was at least as good if not better than the role he did win the statuette for in Good Morning, Vietnam.

There is much to laugh at here as Andrew looks at the world not unlike a newborn baby with his acquired feelings and sensations. He makes mistakes and sometimes misunderstands cliches (a cliche about mechanical men in the movies in itself) but there is also much to cry about as well. A scene near the end when the nearly immortal Andrew chooses humanity and love over eternity is a heartstring puller. Da Queen rated this a four-hankie sniffer, high praise from my wife indeed, who loves nothing more than a good sob in her popcorn.

The ever-dependable Neill gives a solid performance as the family patriarch and conscience and Embeth Davidtz who plays Andrew’s love interests in two separate generations does a good job. Oliver Platt shines as an eccentric roboticist as well but as noted earlier, this is Robin Williams’ show and he shines. Director Chris Columbus also has a fine visual flair as he displays the future in breathtaking cityscapes that are not so farfetched, combining the familiar with the fantastic, and placing the characters in homes that look authentic. This visual flair would serve him well shortly after this was made as he launched the Harry Potter series, his hiring for that job largely based on his work here.

Bicentennial Man is, at heart, a humanist fable, one which appeals to the heart and to the eyes. It asks a tough question – What does it mean to be human? – and the answers are not simple. Because the robots in the story do not exist yet, some might complain that this is a moot point for now, but it is only when we explore ourselves and ask questions like those asked by Bicentennial Man that the real beginning of wisdom manifests itself.

WHY RENT THIS: Oscar calibre performance by Williams and solid support by Platt, Neill and Davidtz. Wonderful cityscapes and believable futuristic homes.

WHY RENT SOMETHING ELSE: The film’s reach exceeds it’s grasp just a little bit.

FAMILY VALUES: There’s a bit of foul language and some sexuality.

TOMORROW: Rise of the Planet of the Apes