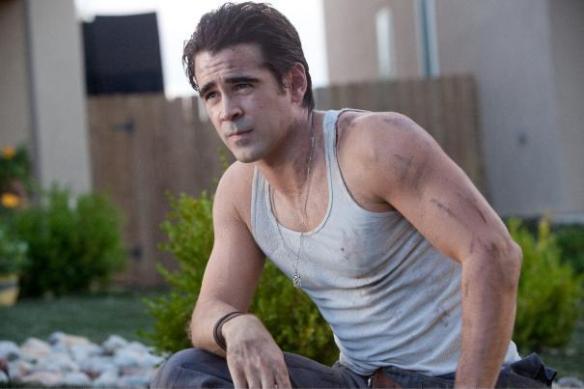 Some high school seniors have it all, but Charlie has all that plus a vampire living next door. Of course, nobody will believe him so Charlie decides he’ll need to take out that infringing bloodsucker by himself before his mom and girlfriend become the latest victim of his next-door monster. Of course if all vampires looked like Colin Farrell, I don’t think Charlie’s women would mind being his victim all that much.

Rating: R (for bloody horror violence and language including some sexual references)

(Lionsgate) Jason Momoa, Rachel Nichols, Stephen Lang, Rose McGowan. From the pages of Robert E. Howard’s legendary fantasy series strides a new version of the muscle-bound hero. Now wearing Arnold Schwarzenegger’s sandals is Momoa in the titular role. Seeking revenge on the warlord who massacred his village and killed his parents, Conan finds himself embroiled in a war with the forces of evil with the very survival of Hyboria at stake.

See the trailer, promos, an interview, a featurette and web-only content here.

Rating: R (for strong bloody violence, some sexuality and nudity)

(Focus) Anne Hathaway, Jim Sturgess, Patricia Clarkson, Ken Stott. On the day of their college graduation, two young people meet. The evolution of their relationship is examined by returning to see how the two are faring in their lives on the anniversary of their initial meeting – for twenty years in a row.

Spy Kids 4: All the Time in the World

(Dimension) Jessica Alba, Jeremy Piven, Joel McHale, Antonio Banderas. The children of a famous spy-hunting reporter don’t get along with their new stepmom. That’s before they find out she’s a retired secret agent, one of the best ever. When a new megalomaniacal villain surfaces looking to conquer time itself, the kids and their now-unretired mom must face their foe to save the world – with a little help from the original Spy Kids themselves.