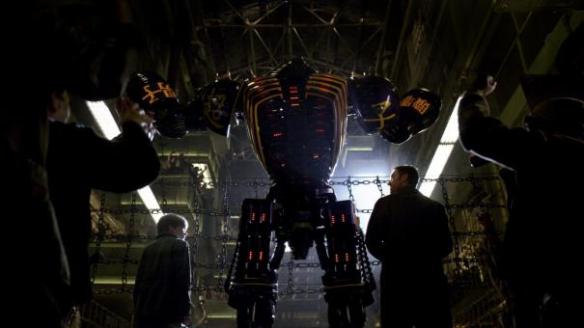 In the near future, boxing has been replaced by robot boxing, in which eight foot tall behemoths battle it out in the ring. For former World Title contender Charlie Kenton, this is very bad news indeed. Reduced to promoting robots cribbed together from scrap metal in seedy venues, he barely ekes out a living. When things become really bad, Charlie teams up with his estranged son Max to train a robot underdog who will, against all odds, give the pair a chance at a second chance.

See the trailer, clips, featurettes and a promo here.

Rating: PG-13 (for some violence, intense action and brief language)

The Ides of March

(Columbia) Ryan Gosling, George Clooney, Philip Seymour Hoffman, Marisa Tomei. A press secretary for a high-profile presidential candidate on the eve of the primaries becomes embroiled in a scandal that could upset the hopes of the candidate he’s working for. This is Clooney’s fourth feature film as a director; his last was Leatherheads in 2008.

See the trailer, clips, interviews and a featurette here.

The Names of Love

(Music Box) Jacques Gamblin, Sara Forestier, Zinadine Soualem, Carole Franck. A young liberal French girl decides to convert middle aged conservative men to her line of political thinking by sleeping with them. That is, until she impossibly falls in love with one of them.

(Sony Classics) Mia Wasikowska, Henry Hopper, Ryo Kase, Schuyler Fisk. A pair of young social misfits are drawn to each other and before long a deep bond is formed, leading to love and complications. Based on the stage play Of Winter and Water Birds by Jason Lew (who wrote the screen adaptation), this is the newest film by acclaimed indie icon Gus van Sant.