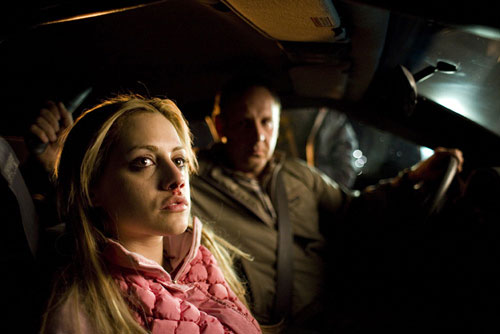 The late Brittany Murphy is about to become The Dead Girl.

Every so often we experience something profound; it changes our point of view and might well change our lives completely. Not all of these experiences are pleasant. Some, in fact can be grisly and ugly. That is simply the nature of life; not all of it is pretty.

Arden (Collette) discovers a badly beaten and mutilated body of a young woman while out jogging. She calls the police and becomes a bit of a local celebrity which gets the notice of Rudy (Ribisi), a bagboy at her local grocery who asks her out. Arden lives with her mom (Laurie) who is a bit of a sadistic monster, forcing her daughter to wait on her hand and foot and generally degrading and belittling her.

Leah (Byrne), a graduate forensics student, finds out about the body on the news and thinks it might be her long-missing sister. Her mother (Steenburgen) urges Leah to let go and move on but Leah is convinced it’s the missing girl. However, after a close medical examination it turns out that Leah is mistaken.

In the meantime Ruth (Hurt), a devout Christian, suspects that her husband Carl (Searcy) is sleeping with another woman. She sets about finding proof of his infidelity and discovers instead evidence that her husband might be a serial rapist and murderer. She is torn between her loyalty to her husband and telling the police what she’s found.

Finally, we see the last day of Krista, her relationship with her pimp boyfriend (Brolin) and the love she has for her daughter and the determination that she doesn’t repeat her past mistakes. We also discover what led her to the fateful encounter with the man who would leave her in that field for Arden to discover.

The story is told in a series of five vignettes, each concerned with a specific woman and how she is affected by the discovery of the dead body, even indirectly (as with Ruth). Moncrieff who attracted some critic love with her feature debut Blue Car resists the temptation to interweave the vignettes and instead tells them consecutively, back to back to back to back to back, letting each story play out to its conclusion and leaving us to wonder about the dead girl until the final tale.

She cast some very strong actresses here starting with the late Murphy, who would die tragically young only three years after making this. She makes Krista a strong woman but one who has allowed her emotions to override her sense time after time. She’s a little unstable and that has led to her girl being raised by others. Although we know in advance what fate is to befall her, she is not portrayed so much as a victim here as much as someone who refuses to be one any longer.

Harden also gets kudos as the mom who alienated her daughter to the point where she ran away, now realizing too late she can never make things right between them. It’s a powerful portrayal and while there is much pathos to it, Harden is never manipulative in the role, preferring to make her character try to understand her daughter rather than grieve nonstop over her.

Some of the vignettes work better than others (the first two are less effective than the last three) but all of them work as a whole. There is a certain squalor here – this isn’t a pretty picture as mentioned earlier – and a dark undertone that is relentless throughout. This isn’t a happy tale, although there are moments where characters experience some kind of enlightenment.

This isn’t always an easy movie to watch. It hits hard on an emotional level, aided and abetted by strong performances throughout (including the ones highlighted). It is definitely a woman’s movie, about how women are affected by the death of a sister, a daughter, a stranger. It also illustrates how vulnerable women are in a world where men will absolutely take what they want regardless of consequence, both to themselves and to the woman involved.

WHY RENT THIS: Very well-acted and the stories resolve together nicely.

WHY RENT SOMETHING ELSE: Like all of these sorts of anthology films, not every vignette works.

FAMILY VALUES: There’s plenty of bad language, some nudity and sexuality and some images that are a bit grisly and disturbing.

TRIVIAL PURSUIT: In the film, the Dead Girl’s last name is Kutcher. Actress Brittany Murphy dated Ashton Kutcher for a time after both starred in the movie Just Married.

BOX OFFICE PERFORMANCE: $905,291 on an unreported production budget; it wouldn’t surprise me to discover that the movie lost money during its brief theatrical run.

1 thought on “The Dead Girl”