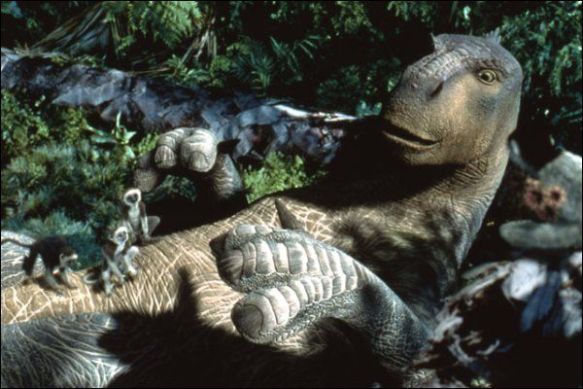 Dinosaur represented a technical advance in animation that raided the bar for future generations of animated movies. It looks so terrific that even big people were stunned at the scope of it when it came out a decade ago. That said, its groundbreaking technical advance is not matched by its storyline, which is typical Disney fare. For that reason, it remains somewhat forgotten among Disney animated films.

Set back in the age of dinosaurs (no duh), we follow the adventures of Aladar (Sweeney) who as an unhatched egg is transported from his nesting site to an island where the thunder lizards aren’t really kings of the jungle. It is where fledgling lemurs, led by the cautious Yar (Davis) and the maternal Plio (Woodward) rule the roost and where the evolutionary facts of life are ignored – primates and dinosaurs? I don’t think so.

Plio prevails upon Yar to help raise the young hatchling Tarzan-style (anyone see a tie-in here?) which they do, transforming the young dashing dino into a sort of big plaything for his much smaller and younger…ummmmm, primates.

Their frivolous games are interrupted by a rather inconvenient asteroid shower, which devastates the island something awful. Aladar swims the surviving lemurs over to the mainland where they find an equal amount of devastation, but join with a herd of dinos heading for the fabled Nesting Ground, led by the brutal Kron (Wright) and his right-hand reptile Bruton (Siragusa), with Kron’s comely sister Neera (Margulies) providing the love interest. Do these sound like Pokemon or what?

Aladar espouses a philosophy of teamwork in order to get the entire herd through the long and dangerous trek; Kron is more of a Darwinist, survival-of-the-fittest kind of guy (kind of ironic when you think about it). Inevitably, the two come into conflict, and with a couple of carnivorous Carnotaurs prowling about, well, let’s just say things look a bit shaky for the herd.

Visually, this is eye candy to the extreme. Everything looks completely real, from the rippling muscles of the dinos to the wind-blown fur of the lemurs. The backgrounds were filmed around the world (including Seminole County in Central Florida, where This Writer and Da Queen currently reside) in order to add realism to the feature, and man, does it work. The asteroid sequence is one of the most stunning visuals I’ve seen in an animated feature to this day, which is saying a lot. The CGI animals react to and interact with their real environment which was filmed with early High-Def cameras and still looks pretty sharp.

Although the storyline is strictly for the birds you’ll be completely entertained for the hour and a half you’re in the theater. Using a species which eventually died out to illustrate the value of staying together and never losing hope doesn’t make a whole lot of sense to me – my sense of irony only extends so far.

For a more, shall we say, realistic look at dinos in a format just as visually impressive, may I recommend the Discovery Channel’s “Walking With Dinosaurs” which is available on DVD pretty readily and will be the subject of a feature film in 2013. It’s an expensive purchase, but it’s well worth it.

As for the Disney version, great for the kiddies, wonderful eye candy, but in the end, just The Land Before Time with a better budget and a more ambitious visual sense. It certainly does engender a sense of wonder that makes it worth the price of a rental, but in the end it would have been better served to go with a DisneyNature-style narration rather than with the storyline of the doomed species working as a team to survive. The message becomes “no matter what you do you’re still going to be extinct.” Not exactly what I want to pass on to children, y’know?

WHY RENT THIS: Amazing visuals. The asteroid sequence is one of the most breathtaking I’ve ever seen in an animated feature.

WHY RENT SOMETHING ELSE: The story is dumbed down for children and creates too much irony in having an extinct species tell us the value of teamwork in order to survive.

FAMILY VALUES: There are some images that might be a bit too intense for the way little ones.

TRIVIAL PURSUITS: Aladar’s name was originally supposed to be Noah but it was thought that would alienate Christian members of the audience so the filmmakers went with Aladar instead.

NOTABLE DVD FEATURES: The Two-Disc DVD edition contains an amazing amount of features, including a trivia track, a couple of games and a herd of hidden features (that can be accessed by clicking on a dino logo that appears in several of the menus) including an old Disney short on the history of animation and another short cartoon featuring dinosaurs.