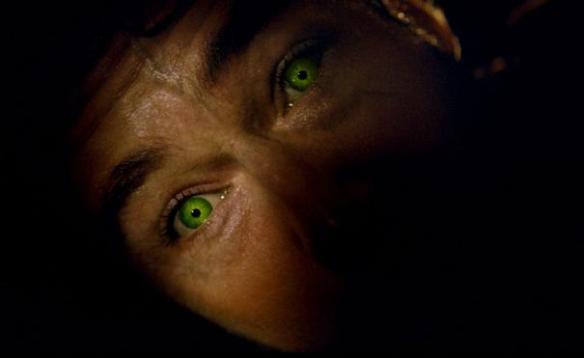 Ol' green eyes is back!

All of us have some sort of demon inside of us. They are of varying size and ferocity, with varying holds on us but we all have one. Some, however, have demons that are far more evident than others.

Dr. Bruce Banner (Norton) is living as inconspicuously as possible in a suburb of Rio de Janiero, working in a soft drink factory. When he is at home, he is doing complex research trying to reverse his condition – when his heart rate goes over 200, his physiology changes, turning him into a green behemoth of enormous strength and agility. Banner had accidentally irradiated himself with gamma radiation in an effort to find ways to regenerate cells but which now the U.S. Army in the person of General “Thunderbolt” Ross (Hurt) wants to create an army of behemoths. Complicating matters is that Banner’s girl is Betty Ross (Tyler), the general’s daughter. Yikes.

Banner runs afoul of some toughs working in the factory and when they attack him and set his heart rate above 200, Banner hulks out just as the army arrives to capture him. Let’s just say it doesn’t go well for the army.

Banner returns to Culver University in Virginia where Betty now works and where she is dating psychologist Dr. Leonard Samson (Burrell). Betty is reluctant to reunite although she clearly still has feelings for Bruce but the suspicious Dr. Samson turns Bruce in and he is captured. But Emil Blonsky (Roth), a British Special Forces agent charged by General Ross to capture Bruce, has taken a super soldier formula and forces Dr. Samuel Sterns (Nelson), a genetecist who has been secretly working with Banner, to inject Banner’s blood into his veins, turning him into an abomination. Only Banner as the Hulk can save the city now.

This movie is inevitably going to be compared to Ang Lee’s 2003 Hulk starring Eric Bana in the Banner role; the earlier version is a much more cerebral turn which was excoriated by fans and critics alike, but which I found to be much better than it was given credit for. This new Letterier-directed version is much more action packed, which is what fans wanted. Consequently it got better marks from fans although that didn’t translate into astounding box office.

Norton makes a terrific Banner; thoughtful, haunted and a little bit short on the fuse, temper-wise. There was a fall out between Norton and Marvel over the editing of the movie, causing the actor to distance himself from the film and Marvel to hire Mark Ruffalo for the upcoming The Avengers movie in the Bruce Banner role. One can only wonder what Eric Bana thinks of all this.

The action sequences are spectacular as you might expect although the CGI Hulk is still not quite as effective as he might be. There is more a connection to the Marvel universe here, with Doc Samson and the Abomination both in the mix and Hurt makes am mighty nice villain. This isn’t the perfect Hulk movie, but it’s a very good one and with homages to previous Hulk incarnations (including the Ang Lee version) in various ways, this is a fanboy dream.

WHY RENT THIS: Action-packed and a compelling story to underline it. Norton does a good job with the Banner side.

WHY RENT SOMETHING ELSE: Some of the CGI doesn’t quite work.

FAMILY VALUES: There is a good deal of sci-fi/comic book violence and a few frightening images.

NOTABLE DVD FEATURES: In the Blu-Ray edition, there’s an animated comic book feature that is also a part of the U-Control feature that allows viewers to access behind-the-scenes content while watching the film.

BOX OFFICE PERFORMANCE: $263.4M on a $150M production budget; the movie was just shy of being profitable.