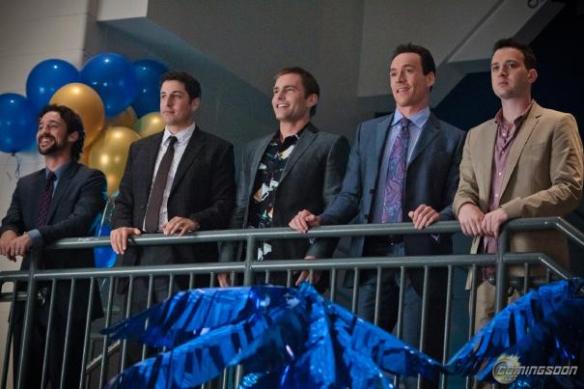 The kids of East Great Falls High have graduated and scattered to the four winds. Of all the couples that had come together ten years ago, only Jim and Michelle remain together, now married with a baby. That’s a far cry from band camp brother. In any case the whole gang is coming back home for the ten year reunion. It may be ten years gone from high school but these are friendships that endure a lifetime. The latest in the American Pie franchise.

Rating: R (for crude and sexual content throughout, nudity, language, brief drug use and teen drinking)

(Weinstein) Ralph Fiennes, Gerard Butler, Vanessa Redgrave, Brian Cox.  A revered general of Rome is pushed into seeking the position of Consul. When he refuses to kiss tush with the masses, they refuse to support him. His anger prompts a riot which results in his expulsion. He winds up allying with his sworn enemy to take revenge on the city. This is the latest Shakespeare adaptation, updated into a modern setting and the directorial debut of Fiennes

Rating: R (for some bloody violence)

(Millennium) Clive Owen, Carice van Houten, Pilar Lopez de Ayala, Daniel Bruhl.  The latest from visionary Spanish horror director Juan Carlos Fresnadillo follows two children in two different countries who are haunted by a being known only as Hollow Face. Nobody believes the children when they tell adults about what’s happening to them but as events begin to pile up there is no denying something beyond our understanding is going on.

Rating: R (for terror, horror violence, some sexuality/nudity and language)

(Paramount/Fox) Leonardo di Caprio, Kate Winslet, Billy Zane, David Warner. The all-time box office champ and the winner of more Oscars than any other film in history gets the 3-D treatment. The ship still sinks.

We Need to Talk About Kevin

(Oscilloscope Laboratories) Tilda Swinton, John C. Reilly, Ezra Miller, Ashley Gerasimovich. A mother must deal with the fall-out of her son’s heinous actions, as well as the ire of her community. Her relationship with her son is called into question as is her culpability in the acts that he committed. Swinton received a Golden Globe nomination for her role as the mother.

Rating: R (for disturbing violence and behavior, some sexuality and language)