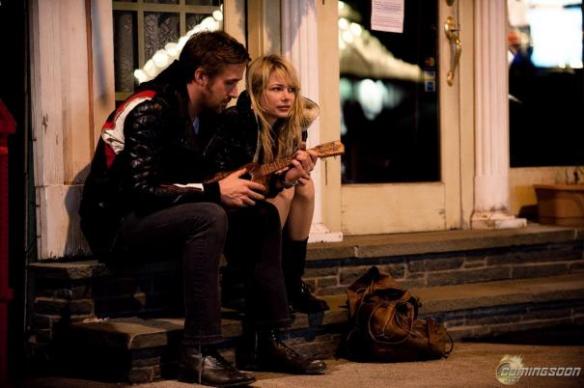 I have read that it is seldom certain when love begins but it is always obvious when love ends. It isn’t always an easy explanation; it’s not always that one cheats on the other, or one partner is abusive. Sometimes, what was right to begin with just stops being that way.

Dean (Gosling) and Cindy (Williams) have been together for six years after running into one another at the retirement home where Cindy’s grandmother lived and where Dean was moving a new resident in (he worked at the time for a moving company, although he’s a housepainter now). Their relationship is in its death throes; while they have a daughter Frankie (Wladyka) that both are terribly devoted to, they can barely tolerate the presence of the other. Cindy can hardly mask her revulsion whenever her husband touches her or initiates anything sexual; Dean for the most part is frustrated and can’t understand why Cindy’s feelings have changed so much towards him.

As with most things, to understand the present one must first understand their past and we are introduced to Dean and Cindy, via flashback, at the beginning of their relationship. They are younger, full of energy and passion, barely able to contain their desire for one another, romantic in a goofy and endearing way.

How, then did they get from starry-eyed lovers to disillusioned couple? From the dewy eyes of youth to receding hairlines? Well, to paraphrase a popular motivational quote, aging is inevitable but growth is optional.

The fact is that Dean reached the nadir of his life’s ambition when he married Cindy; she didn’t realize how true that was because he was happy and didn’t want things to change whereas she was growing, reaching for more and not accompanied by her husband. His ambition had already been achieved and he didn’t particularly care if things got better because to his mind they couldn’t.

This passion project for Cianfrance took almost a decade to get to the screen and it was worth the wait. Cianfrance was prescient (or fortunate) enough to cast two of the best young actors in Hollywood in the leading roles, and they both delivered searing performances, particularly Williams who would receive a 2011 Oscar nomination for Best Actress for her performance.

The nuances here are what make the movie worth seeking out. This is not a pair of actors reacting to a contrived situation; this is a couple dealing with real world issues that are all too common; one half has grown and the other hasn’t. This is a sadly regular happening that is one of the main causes of the high divorce rate. People tend to mature at different rates and often enough one leaves the other behind. We only marry someone at a specific moment in time; that doesn’t guarantee that we’ll both remain on the same page until death do us part.

Williams is becoming a major star; she delivers amazing performances in nearly every movie she’s a part of, although she has yet to become a big name. That’s mainly because she hasn’t yet headlined a big box office favorite but that’s just a matter of time. Here she shows Cindy at two stages in her life; in college where she looks forward to medical school and a career in medicine, the future stretching out before her like a brightly-colored ribbon inviting her to a bright tomorrow. The second is approaching 30, working as a nurse in a fertility clinic, a loveless wife and unenthusiastic mother. She makes both parts organic to the character and both work. It’s an amazing accomplishment and could only be pulled off by an actress of the first order.

Gosling is an intense actor, having pulled off Oscar-nominated turns in such films as Half Nelson and appearances in critically acclaimed fare as Drive. He has a role that is a bit more clearly defined than Ms. Williams does but makes it unique and his. This is a role that could easily have been botched into cliché and to his credit, Gosling chooses to make the role less lovable, less relatable. He doesn’t make it easy to like Dean, but we can understand him insofar as we can understand anyone. He’s a cypher but not a complete one.

This isn’t an easy movie to watch and you should know that before watching it. This is not to be watched as background noise or while multi-tasking; it requires – demands – your complete attention and at least as much thought as you can muster. It is pretty depressing for the most part – this isn’t about how love grows but about how it dies. That can be rather unsettling to watch, particularly if you’re in or have recently been in a similar situation.

Realism aside, this is a strong look at how relationships can just dissolve – not due to anything willful on the part of one party or both, but just because that was the way it was always going to evolve. In some ways it’s painful to watch, like seeing a favored pet in pain, but there is something to be learned from it so it is a worthwhile experience.

WHY RENT THIS: Gosling and Williams are two of the most impressive young actors in Hollywood today. Terrific structure and framing.

WHY RENT SOMETHING ELSE: Hard to watch at times; can be gloomy and depressing.

FAMILY VALUES:  There are an awful lot of swear words here as well as some very graphic sexual content. There is also a depiction of spousal abuse that isn’t for the faint of heart.

TRIVIAL PURSUIT: The scenes in which the couple meet and fall in love were filmed first; Gosling and Williams were kept apart so that the sense of them meeting for the first time could be preserved. After those scenes were completed, Gosling, Williams and occasionally Wladyka lived together for a month before filming the dissolution scenes during which time they practiced picking fights with each other.

NOTABLE DVD EXTRAS: There is a home video recorded of the three actors during the hiatus between the filming of the falling in love and falling apart sections of the film.

BOX OFFICE PERFORMANCE: $12.4M on a $1M production budget; the movie can be termed a financial success.