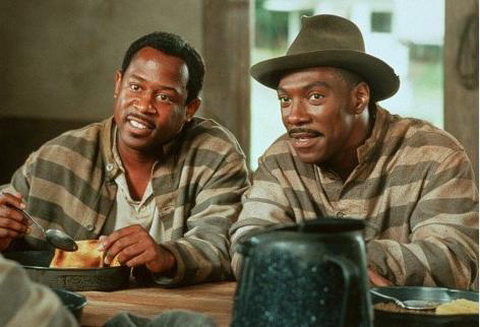 Martin Lawrence and Eddie Murphy ponder the meaning of Life.

Once upon a time in America, life in prison meant precisely that. There was no early parole, no time off for good behavior. If you were sentenced to life, you could pretty much count on dying a prisoner in some godforsaken camp, farm or prison.

Rayford Gibson (Murphy) is a small-time crook in Prohibition-era New York trying to get out of debt to a Harlem mobster (James). He sets up a scheme of driving some Mississippi moonshine to the mobster’s speakeasy in New York. He ropes in as his driver Claude Banks (Lawrence), a bank teller (a bank teller named Banks? haw haw!) who has also fallen afoul of the mobster because of an unpaid gambling debt.

Gibson’s weak nature gets the better of him and after receiving the liquor shipment, he decides to do some gambling in a rural club. He gets cheated by a local card sharp (Williams) who later mouths off to the town sheriff, who murders him. Banks and Gibson have the misfortune of discovering the body, and being seen with it. They get, you guessed it, life in prison.

The two, initially antagonistic to one another, are forced to rely upon each other in the brutal work camp to which they are sentenced. Time passes and they dream of the freedom it seems will be denied them for a crime of which they aren’t guilty. Prison changes them – but will it be for the better?

There are a lot of poignant moments in Life and with Murphy and Lawrence, even more funny ones. There is social commentary in the form of how black men are treated in the South, but it isn’t strongly told or terribly compelling. Other movies explore that subject in greater depth and with greater insight.

The problem with “Life” is that the filmmakers aren’t sure whether they wanted to make a comedy, an examination of prison life in the Deep South of, say, 50 years ago, or a political/social commentary on the shaft given African Americans. They decide to do all these things, and in fact their reach exceeds their grasp.

Rick Baker does a great job of aging the two actors for their 60 year stint in prison and both actors have made a career of doing old age well; in fact, the make-up got an Oscar nomination that year. The various eras portrayed in the film are captured pretty nicely, and despite the fairly large cast the pace moves along at a good clip.

Some of the best African-American comics and comic actors in the country show up in the film, including the late Bernie Mac in a small role at the beginning of his career. The acting certainly isn’t the problem here. No, I think that the big problem is that this is kind of a Song of the South fantasy that glosses over the big issues – these guys are in prison for a crime they didn’t commit, after all – and goes for more of a sweet feeling that simply doesn’t mesh.

Life really doesn’t give you any new insights into anything. It’s mainly an excuse to pair two of the brightest comic minds at the time in America. Watching the two at work individually is fascinating, but Lawrence and Murphy don’t generate enough chemistry to hold any interest as a team, which is why they never teamed up in a movie again. Still, these two remain some of the best comedians of the past 20 years and seeing both of them together in the same film has some attraction right there.

WHY RENT THIS: Any opportunity to see Murphy and Lawrence is worth taking. Excellent supporting cast.

WHY RENT SOMETHING ELSE: Ignores the larger issues. The chemistry between Murphy and Lawrence isn’t quite as good as I would have liked.

FAMILY MATTERS: There is some violence as well as plenty of salty language.

NOTABLE HOME VIDEO FEATURES: There are some outtakes in which Lawrence and Murphy try to crack each other up – and in all honesty, some of these are funnier than what you’ll find in the movie.

BOX OFFICE PERFORMANCE: $73.3M on a $75M production budget (estimated). The movie was a financial failure.

NEXT: The Dark Knight Rises