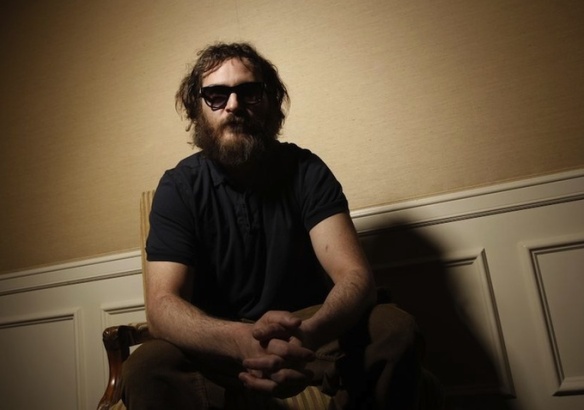 Joaquin Phoenix prepares for his next role in the remake of Grizzly Adams.

We have an image of stars in our heads as self-absorbed divas who throw tantrums if they don’t get things EXACTLY the way they want it (“I told you, no BROWN M&M’s…why is that so hard?”) they throw legendary tantrums. We are fascinated by their behavior.

Which is what the makers of I’m Still Here are banking on. This is a chronicle of actor Joaquin Phoenix, who famously retired from acting after the 2008 indie romance Two Lovers to embark upon a rap career. He had a meltdown on the David Letterman show, one in which the host quipped “I’m sorry you couldn’t be here tonight Joaquin” which is shown here.

He also has an assistant named Anton (Langdon) that he humiliates  and abuses mercilessly, so much so that Anton takes a dump into the actor’s face while he’s sleeping. Such is the abuse that you will not think the act unjustified, although be assured that he’s not really doing what he appears to be doing. In fact, Phoenix is abusive to nearly everybody here to the point where it’s amazing that anyone would be willingly employed by him. Which is ironic because in reality, there were sexual harrassment charges brought against the filmmakers which were settled out of court.

There was some debate as to whether this whole thing was an elaborate hoax. At the time people were unsure and many of the reviews of the film from its 2010 release reflect that the critics were unsure and confused.

Let me set the record straight – it’s a hoax. Of course it was. Would Joaquin Phoenix allow a movie that portrayed him as an tyrannical egomaniac that is borderline psychotic ever see the light of day? Think about the logic; if someone is as egotistical as Phoenix is made out to be here, he would never allow his image to be tarnished.

I mean, Phoenix’ rap music is borderline unlistenable – and everybody but Phoenix knows it. Affleck’s camera captures the reactions to the music; from polite disbelief to outright hostility. Nobody but Affleck and Phoenix are in on the joke (and maybe some of the actors, such as Langdon) so you get their genuine reactions to situations that are awkward.

Which is fine, but the audience ends up being caught in the awkwardness, much like watching a friend who’s had too much to drink soil themselves. You want to get up, make your excuses and get as far away from the train wreck as possible which is not how you want your audience to feel. The truth is, this is really an exercise in ego – you’re not let in on the joke (which is a cardinal sin) and expected not to feel the fool when you figure it out – because if you don’t you wind up completely repulsed. Part of my distaste is the portrayal of Phoenix as a borderline drug addict – which considering the way his brother River passed away really stretches the line as far as I’m concerned.

There are a lot of celebrity cameos (as you can see from the credits above) and I believe none of them are in on the joke either. So you get the sense that the hoaxers did their jobs too well – they’ve really put one over on all of us to the point that there are plenty of people who think that it wasn’t a hoax. For me, seeing is believing.

WHY RENT THIS: Occasionally amusing.

WHY RENT SOMETHING ELSE: A crude exercise in ego. Not nearly as funny or engrossing as they think it is.

FAMILY VALUES: There is some graphic nudity and drug use, a plethora of swear words, plenty of anti-social behavior and crude content.

TRIVIAL PURSUIT: The person in the film that is playing Joaquin Phoenix’ father is actually Casey Affleck’s dad.

NOTABLE HOME VIDEO EXTRAS: There are some conversations in which Affleck, Phoenix and various critics and academics discuss the film, the hoax and the aftermath.

BOX OFFICE PERFORMANCE: $568,963 on an unreported production budget; this might have just made some money

COMPARISON SHOPPING: This Is Spinal Tap