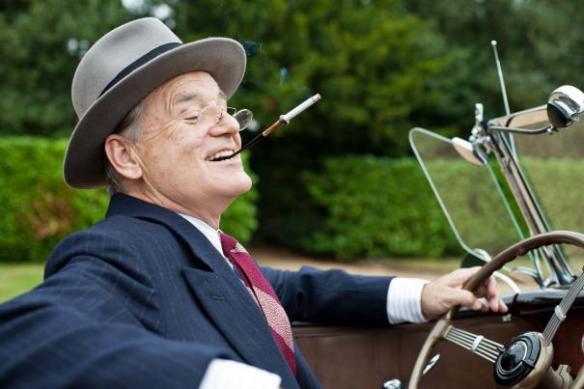 Earlier this year, Steven Spielberg’s long-gestating project, Lincoln finally came to fruition. It was a superb film that really humanized the iconic President and made him, if anything, even more worthy of admiration. Franklin Delano Roosevelt is another President who is much loved (well in Liberal circles anyway) and a similar treatment of him would surely have been welcome.

It is 1939 and the world is on the brink of war. King George VI (West), the recently crowned and woefully unprepared monarch of England (after the abdication of his brother) is coming to the United States – the first reigning King of England to ever do so – not just to make political hay in his own country but also for a desperately important task; to gauge whether the Americans would assist them when war inevitably broke out (as it would do a scant three months after their visit).

Springwood, the President’s estate in Hyde Park, New York in the Hudson Valley is in an uproar. To be hosting the King and Queen (Colman) of England is important enough but the whole affair has turned into a battle of wills between the President’s mother (Wilson) and wife Eleanor (Williams). Mommy, ever mindful of FDR’s political image, wants nothing done to tarnish his image as a world leader while Eleanor seems hell-bent on tweaking the monarchs somewhat.

Franklin (Murray) needs some respite from the bickering and stress. After a number of relatives are called without success, a distant cousin named Daisy (Linney) at last answers the call and is driven to Springwood to help “take the President’s mind off of things.” It’s awkward at first; while related, they barely know each other and Daisy isn’t really sure what she’s doing there. Franklin pulls out his stamps. They seem to hit it off however once that initial discomfort wears off. Soon they are going for rides in the countryside in a specially fitted car that the President, stricken by polio and nearly unable to use his legs, can drive only with his hands. Soon those drives are leading to stops and at those stops there is some intimacy.

Meanwhile the war continues with FDR’s secretary Missy LaHand (Marvel) trying to mediate but there are absolutes going on – Eleanor wants the Royals to attend a picnic in which hot dogs are served which is mortifying enough but that she wants to serve cocktails ­– that’s more than the teetotaling mother of the President can bear. Daisy tries to hover near the edges so that none can figure out the nature of the relationship she’s building with Franklin, but even she doesn’t quite understand what’s really going on.

The relationship between Daisy and FDR would remain a secret until shortly after she died just shy of her 100th birthday. Some letters and diaries were found in which she discussed her intimacies with the former President. I’m not sure how much the writers relied on those writings for the story – whether they were faithful to Daisy’s words or if they used them as a rough outline – but it could have been a nice jumping off point.

My problem with it is that Daisy really isn’t all that interesting a character. She’s a middle aged woman (she was 48 when these events took place) who hasn’t had a lot of experience with men and develops almost a high school crush on FDR. She is in her own way as lonely as the man at the top, her life mainly revolving around her aunt (Bron) whom she acts as a caretaker to.

She seems like a nice enough albeit naive woman but I’m not sure that she’s got the personality to base an entire movie around – and that isn’t a knock against Linney. She fares much better than Murray however, who doesn’t resemble FDR in the slightest and whose attempt to mimic the distinctive style of speech and accent of the President is simply ghastly. A very big issue – and this isn’t Murray’s fault in the slightest – is that we never get much of a three dimensional portrait of FDR. We see him as a letch and as somewhat disingenuous but we never get a hint of the political savvy or of his inner strength in pulling the country out of a depression and overcoming polio. Instead he sems mostly to hold to the parody image of Bill Clinton as an insatiable womanizer.

The surrounding cast is pretty good, particularly West and Colman as the somewhat befuddled royals who are on the one hand afraid and self-conscious but on the other hand not really sure what to do. We met West’s Bertie in The King’s Speech played with a little more charisma by Colin Firth but West carries the weak chin and frustration of a lifelong stutterer very well. Colman gets the haughty attitude of a Royal who is quite unsure if she’s being made sport of.

Williams also captures the forthright shoot-from-the-hip attitude I always imagined Eleanor Roosevelt to have, although like Murray her accent is distracting. The movie has a bit of a sense of whimsy in the humor (the looks on the faces of the Royals as King George VI is served a hot dog is priceless) but where it lacks is in heart. I was left unmoved for the most part and would have wished that the legacy of President Roosevelt didn’t get trashed by making him out to be the sort of man who thought first with his genitals. I believe him to be a much more complex character than that and that’s precisely what we didn’t get and despite delivering a beautifully shot, meticulously detailed film, we don’t get a movie that is anything more than an ABC Family movie for the middle aged.

REASONS TO GO: Captures some of the cult of personality around FDR and of the era he lived in. Reduces a crucial point in history into a soap opera.

REASONS TO STAY: We really don’t get a sense of FDR the man other than as a complete jerkwad and Murray seems content to caricature him rather than explore him.

FAMILY VALUES:  There is a bit of sexuality and some fairly adult situations.

TRIVIAL PURSUIT: Daisy’s real name was Margaret Suckley and she was one of four women at the Little White House in Warm Springs, Georgia when Roosevelt passed away.

UPSTATE NEW YORK LOVERS: I’m not 100% sure if they filmed the exteriors in the Hudson Valley near where these events actually took place but it does look as if they did and those exteriors are just breathtaking.