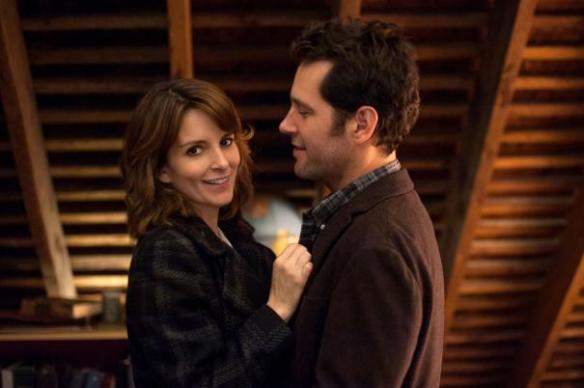 Two people who know just how cute they are.

Getting into a good school can make all the difference in life. Princeton University, as one of the best schools in the nation, has to rigorously check potential students, culling out the wheat to get to the chaff. Looking for the best and the brightest isn’t always easy.

Portia Nathan (Fey), as one of Princeton’s top admissions officers, has that unenviable task. The simple math is that there are far more applicants than there are open spots so much of what she does is telling young students that their application has been declined.

This year it’s particularly vital because the director of admissions (Shawn) is stepping down at the end of the year and he doesn’t want to go out as number two, which Princeton has fallen to for the first time in years. His position will go to either Portia or Corinne (Reuben), her supercilious rival. Portia, whose territory is the northeast, is given the directive to find some new blood from schools not normally associated with Princeton.

Then she gets a call from John Pressman (Rudd), a former classmate at Dartmouth with Portia who knew her roommate well. He’s got a progressive school called Quest Academy in New Hampshire and has a student he’s particularly high on that might make a nice addition to Princeton’s student body. He invites her to talk to the student body about the advantages of going to Princeton. Oh and by the way, the student in question – Jeremiah (Wolff) – may possibly be the child she gave up for adoption just after she graduated from college. Whoops.

Of course now this puts her maternal instincts on overdrive and her impartiality on vacation. In the meantime her personal life is in chaos as her longtime boyfriend (Sheen) has dumped her for a bitchy English professor (Walger) and her relationship with her goofy feminist mom (Tomlin) is pinballing around her life like a pachinko machine gone berserk. On top of that John is looking kinda cute and sexy, even though she tells herself she wants no part of him. Which of course means she does.

Weitz, who’s made some pretty nifty pictures in his time (including About a Boy and American Dreamz) doesn’t quite have that kind of material here. This is, to be honest, a pretty pedestrian story, full of your basic romantic comedy clichés. Fortunately, that’s not all it is – there’s a bit of satire on the higher education system and how cutthroat it has become. There’s also something about embracing the differences, and understanding that people are more than the sum of their parts.

Fey and Rudd make appealing leads and that should come to nobody’s surprise – they are two of the most likable actors in Hollywood. They are not only an attractive couple, they play off of each other well. Both of them are pretty low-key however; there is nothing frenetic here and so the movie has a curiously muted feel. I suspect Weitz didn’t want to play this strictly for comedy (despite casting comedic actors in nearly every role) and wanted a dramatic edge to it but it winds up really settling into a middle ground that is neither funny nor dramatic.

Tomlin makes the movie worth seeing alone. One of the greatest comedians of all time (male or female), she infuses Susannah with just enough grouchiness to be funny, but just enough tenderness to give her the potential for redemption. Tomlin is definitely the comedic highlight here, which I’m sure that Fey as a longtime admirer doesn’t mind.

I actually liked the movie overall – but I didn’t love it (obviously). I wish it had been written a little bit better – perhaps Fey, one of the better writers working today, should have had a hand in it. Having not read the novel that is the source material, I can’t say for certain whether the fault lies in the source material or the adaptation but either way the plot is far too predictable – one of the main twists was predicted by Da Queen early in the movie and not to say that Da Queen isn’t a savvy moviegoer (she is) but it shouldn’t have been that easy for anyone to get it. With the summer blockbusters just a month away from the theaters, this is probably easy to overlook and is just as viable a choice for home viewing as anything else out there.

REASONS TO GO: Nice chemistry between Fey and Rudd. Pleasant and charming in places.

FAMILY VALUES:  There’s a bit of language and some sexuality but not a lot.

TRIVIAL PURSUIT: While some of the scenes were shot on the campus of Princeton, more of it was shot at Manhattanville College in Purchase, NY.

NEXT: The Burning Plain