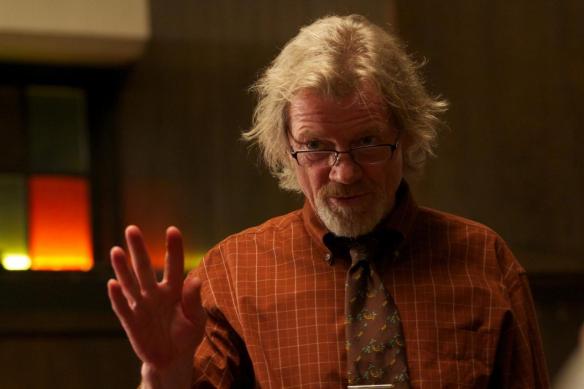 What Pastor Abin Cooper REALLY wants to be is Vulcan.

Life is full of it’s real horrors. Both conservative and liberal alike are outraged and disgusted by the antics of Fred Phelps’ Westboro Baptist Church whose fundamentalist Christian zealotry borders on the batshit crazy. More accurately, is full on over the border and deep in crazy territory. You have to wonder what goes on in a congregation like that.

When they awaken they are in the church of Pastor Abin Cooper (M. Parks) who makes Fred Phelps look like a Girl Scout. They are treated to one of his fire-breathing sermons of hating sin and hating the sinners, ranting against the evils of homosexuality, adultery and premarital sex. Basically, against anything fun I suppose.

When a gay teen who was similarly entrapped is executed while immobilized and tied to a cross with saran wrap, the three boys realize they are in mortal danger. Travis is being bound to the cross when a deputy rolls up looking for the boys car which had sideswiped the Sheriff’s car while the Sheriff (Root) was parked on the side of the road having sex with his partner. Billy-Ray is able to free himself and manages to escape into the armory where he gets into a shoot-out with Caleb (Garman). This attracts attention of the deputy who calls in the shots fired to the Sheriff, who in turn calls in the ATF in the form of Agent Keenan (Goodman).

This is very much unlike any other Kevin Smith film; while there are humorous elements here it is most definitely not a comedy. This was also distributed in a unique way – for the most part, Smith took the film on tour with Q&A sessions following the screenings. There was also a one-day screening of the film just prior to its VOD and home video releases.

Smith is a well-known fan of genre films and while he doesn’t have the encyclopedic knowledge of B-movies like a Quentin Tarantino I do believe his affection for horror, action and comic book genres is just as passionate. He has tackled religious themes before in Dogma albeit in a much more satirical vein. He also is one of the finest writers in the business in my opinion with dialogue that is second to none in making onscreen characters talk like people you’d run into at the grocery store. Believe me, that’s a lot more difficult than it sounds.

The part of Pastor Abin Cooper was written specifically for Michael Parks and he delivers a blistering performance that will chill you to the bone and stay with you for a long while afterwards. His delivery is so smooth and so gentle that you are almost fooled into buying his message which you come to realize is absolutely whacko.

Goodman is solid as usual as the government stormtrooper who is tasked with bringing a situation that has spiraled wildly out of control back in control and who has no problems with carrying out orders that to you and me might seem immoral. In many ways, Cooper and Keenan are opposite ends of the same coin.

There is plenty of violence here and while I would hesitate to label it strictly as a horror film mainly because the gore and level of terror isn’t in line with, say, a Hostel movie. As thrillers go however, it is on the gruesome side. To my mind the movie winds up being somewhere in the middle – call it throrror. The overall tone is pretty bleak so be aware of that and the body count is high; if you like to play the game of “who’s still standing at the end credits” chances are you’re gonna be wrong. Some main characters barely make the second act and some surprising characters are still around when the dust settles.

There is a lot of things going on here of a topical nature, dealing with religious fanaticism, government overkill and homophobia which makes for entertaining viewing. However, the movie lacks a strong center – Gallner as Jared kind of assumes that role by default but is never really fleshed out enough to get the audience intrigued. Still, it IS Kevin Smith and the guy can write so there is entertainment value here. Hell, ALL of his movies have entertainment value (except for maybe Cop Out) of at least some degree. Still, one wonders what direction he is going to head in next – genial raconteur or all-out revenge film slasher found footage supernatural thriller.

WHY RENT THIS: Terrifying portrayal of religious fanaticism. Very topical.

WHY RENT SOMETHING ELSE: Too tame to be good horror, too bloody to be a thriller.

FAMILY VALUES: The content here is awfully disturbing and violent with plenty of foul language and sexuality. There’s also a bit of nudity.

TRIVIAL PURSUIT: The character of Abin Cooper was named after Abin Sur from the Green Lantern comic book series.

NOTABLE HOME VIDEO EXTRAS: There’s an informative interview with Michael Parks, a Q&A session with Smith from Sundance and a making-of feature which includes the Westboro Baptist Church’s reaction to the film and finally a series of Smith podcasts recorded while the film was shot, in post-production and finally in theaters.

COMPARISON SHOPPING: Children of the Corn