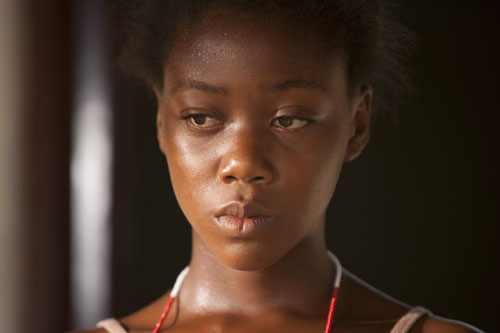 Here in America, AIDS isn’t the same issue it used to be. Advancements in pharmaceuticals and care have given many their lives. It’s a different story in other places

Chanda (Manyaka) is a bright 12-year-old girl in the Elandsdoorn township near Johannesburg, South Africa but this day she is far from happy – she’s picking out a coffin for her baby sister. Her mother is too overcome with grief to do it and her father is too busy drinking and hanging out with floozies to do it. Not long after the funeral, her mother (Mvelase) takes ill and is sent away.

This leaves Chanda with younger sisters who basically don’t want anything to do with her and a sympathetic neighbor Mrs. Tafa (Manamela) keeping an eye on them. Chanda’s best friend Esther (Makanyane) has taken to prostituting herself to truck drivers in order to survive – she has been orphaned as both her parents passed away from AIDS.

Meanwhile in the township rumors are starting to circulate and whispers that Chanda is cursed – sickness seems to revolve in the air around her. Chanda needs answers and the only person who can supply them is her mother, so she sets off to find her. But be careful what questions you ask – you might not like the answers.

This is a searing, emotionally powerful movie that takes on AIDS and the way that sufferers of the disease are treating in Africa. There are those who ostracize and stigmatize the victims, as if they were to blame for  their illness. Chanda’s situation isn’t uncommon in South Africa – in Africa in general in fact.

Manyaka delivers an amazingly intuitive performance; as you can see above, her eyes are incredibly expressive and she fills the character of Chanda with plenty of energy and strength. Chanda as written is an impressive girl but I think Manyaka might just be as impressive. You don’t accomplish this kind of performance without real soul.

This isn’t always a pretty picture. There is some ugliness to how the villagers react and of course the situation is pretty grim in and of itself. The thought of 12 year old girls giving truckers blow jobs is absolutely outrageous to me, and yet it is a way of life for girls in that part of the world.

The ending is pretty upbeat despite the overwhelming despair that you would think is part of everyday life in Elandsdoorn (which is actually a pretty middle class suburb in many ways). The title can be interpreted in a few different ways (and is a bit of a clue to the denouement if you think about it) but for the girls in this movie, you can’t help but admire the strength of the African women here. It is a strength that seems to be part of their genetic make-up and it is nice to see it portrayed so positively even given the bleakness of the subject matter.

WHY RENT THIS: Astounding performances by the mainly local and inexperienced cast. Calls attention to the continuing stigmatization of AIDS victims.

WHY RENT SOMETHING ELSE: Improbable ending.

FAMILY VALUES: The themes here are very adult in nature; there is also a bit of sexuality in the mix.