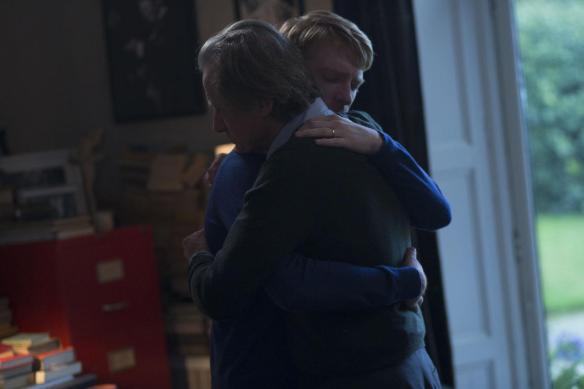 We often wish the opportunity was there to go back in time. What would you do if you could? Fix the mistakes you’ve made? Spend it with a loved one who’s passed on?

Tim (Gleeson), a diffident just-turned-21-year-old who lives in one of those eccentric British families that is more endearing than creepy, is given just that dilemma. He’s pulled aside from his kindly eccentric dad (Nighy) and told that the men in the family can inexplicably travel back into the past. Not just any past – just their own. All they have to do is go into a dark place, shut their eyes and clench their fist and think about the moment they want to go to and bingo bango bongo! There they appear, wearing the same clothes they wore at the time.

Tim, an aspiring lawyer who is just about to move to London to take up a practice, is surrounded by that lovably eccentric family I just mentioned. Kit Kat (Wilson) is his free-spirited younger sister who loves to hug but hates to wear shoes and has terrible taste in men as it turns out, leading her down a scary road. Uncle Desmond (Cordery – referred to as Uncle D) is scatter-brained and possibly senile but is a natty dresser. Only Tim’s mum (Duncan) seems to have any grounded sense whatsoever, putting up with her husband’s eccentricities and puttering about in the garden in their lovely but somewhat seedy Cornwall manse.

With this gift in his grasp, he decides that rather than pursue fortune or fame (or just catch up on his reading as his father does) he chooses instead to get himself a girlfriend. At first he goes after Kit Kat’s friend Charlotte (Robbie) but that doesn’t go quite so well, so he moves into the flat of perhaps the meanest most curmudgeonly playwright in Britain (Hollander) and strikes up a friendship with office doormat Rory (McGuire). He also maintains his longtime friendship with socially awkward Jay (Merrick).

Going out to dinner with Jay at one of those restaurants that serves their meals in complete darkness, they end up sitting at a table and having an unintended double blind (literally) date with the tartish Joanna (Kirby) and the mousy American Mary (McAdams). Tim falls for her hard at first sight outside the restaurant. From then on, his focus is on winning her over, correcting the mistakes he makes by ducking into nearby closets and toilet stalls.

As his extraordinary but ordinary life progresses and Tim continues to use his gift he discovers that not everything can be fixed and those things that can be often come at a great price. He also learns what is important in life and what moments shouldn’t just be relived – but lived in the first place.

Curtis previously directed one of my all-time favorite movies (not to mention one of the best romantic comedies ever) in Love, Actually and also has written such fine films as Four Weddings and a Funeral and Bridget Jones’ Diary. His penchant is for writing about somewhat awkward, stammering nebbishes with nonetheless sweet hearts who look for and find love, sometimes with unexpected partners. Hugh Grant has been his main stand-in but Gleeson (son of brilliant character actor Brendan) isn’t half-bad. The ginger-haired ex-Weasley from the Harry Potter series has a lot of the same characteristics that Grant has – the wry wit, the stammering delivery, the self-effacing charm.  He is less handsome in the traditional sense (although he’s plenty good-looking) and is more of a believable un-self-confident sort than Grant ever was.

Bill Nighy, a regular in Curtis’ films (who could forget his Billy Mack in Love, Actually?) can steal a movie just by being Bill Nighy. His droll delivery and eccentric demeanor are completely endearing. His chemistry with Gleeson is considerable and there seems to be a genuine warmth between the two men. One looks forward to Nighy’s films and his final scenes are powerful indeed.

This isn’t just a movie about finding love, or of time travel. It’s much deeper than that. This is a movie about appreciating the moment, of cherishing the things that are small and everyday occurrences.  Curtis reminds us to live each day to the fullest possible, to savor the little joys – the gratitude of a harried counter girl, the smiles on the faces of your children when you come home from work (although if this were an American film the little brats would be glued to a videogame) or the glow of lamplight as you walk into your home from the darkness after a long day.

While like a lot of Curtis films the cute factor sometimes brushes up against overload, the meaning behind the movie is clear and will give you lots of food for thought well after the end credits roll. While the cynical and jaded sorts (many of whom are New York film critics) may not find this to be their cup of tea, you’ll want to pour honey and lemon in and sit back and sip contentedly. Like a good cup of hot tea, this movie will leave you with a warm, loved feeling and perhaps also with an irresistible urge to hug someone you love.

REASONS TO GO: Surprising depth and warmth. Nighy steals the show but Gleeson proves to be an able comic actor.

REASONS TO STAY: Too cute for its own good in places.

FAMILY VALUES:  A fair bit of cursing and some sexual scenes.

TRIVIAL PURSUIT: This the third movie in which Rachel McAdams plays the love interest of a time traveler (Midnight in Paris and The Time Traveler’s Wife are the other two).