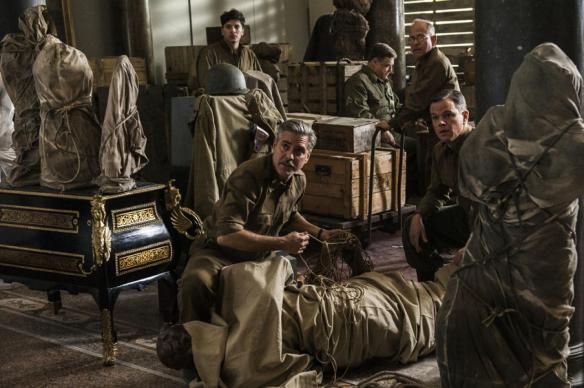 The Monuments Men amidst the monuments.

World War II wasn’t just a fight for freedom; it was also a fight for the soul of Europe. Some of the greatest achievements of mankind were put at risk. There was a small cadre of men who devoted their lives to saving these works of art and architecture near the end of the war – this is their (fictionalized) story.

Frank Stokes (Clooney) is an art historian and the curator of the Fogg Museum at Harvard University. He is aware that the Nazis have stolen art from Jewish collectors and museums throughout the territories they conquered in Europe. Most of it is meant for a museum that Hitler is building in his own honor in Austria, although some is being destroyed outright – Hitler, not a fan of modern art, burned hundreds of Picassos, Dalis and other modern artists as kind of the ultimate art critic.

Given the go-ahead by FDR to protect these artists and significant buildings and also to retrieve them and restore them to their rightful owners, Stokes puts together an eclectic collection of middle-aged men who are far from fit for the most part; Chicago architect Richard Campbell (Murray), art restoration expert James Granger (Damon), sculptor Walter Garfield (Goodman), a British museum director looking for a second chance Donald Jeffries (Bonneville), theatrical impresario Preston Savitz (Balaban), and Jean-Claude Clermont (Dujardin) a former French painting instructor.

They undergo rigorous physical training that really underscores how out-of-shape they are and head off to France shortly after the invasion of Normandy to begin to track down the stolen art. Claire Simone (Blanchett), a curator at the Louvre in occupied Paris, had watched helplessly as SS officer Viktor Stahl (von Dohnanyi) appropriated pieces for Hermann Goering and for the Hitler museum. She is devastated when he takes everything as the Allies close in on Paris and becomes suspicious of Granger, thinking that the Americans are no better than the Nazis, wanting these priceless works of art only for themselves.

In the meantime, one of the Monuments Men gets to the cathedral at Bruges to protect the Madonna and Child by Michelangelo (the only work of his that left Italy during the great artist’s lifetime) only to die in the attempt. As we might say now, poop gets real, cuz.

Eventually they get wind that the Nazis stored most of the works in castles and mine shafts throughout Germany but an order has gone out signed by Hitler himself that should the Fuehrer die or Germany fall, everything is to be destroyed. Not only that but a Russian contingent is out to find the stolen art also but not to return to its rightful owners, but to keep as war reparations. The nearly impossible task just got a timer put on it.

Clooney takes the many hats of producer, director, co-writer and star and it may be one too many hats. The movie, based largely on Robert M. Edsel’s non-fiction book of the same name, has essentially Hollywoodized the story of the Monuments Men, fictionalizing their characters and some of the events (although much of what happens story-wise is what happened reality-wise but not all). I’m one of those guys who prefers watching a true account of what really happened rather than seeing something that is jazzed up, romanticized and a gloss thrown over it. I guess I’m into history more than mythology.

That said, the entertainment quality is pretty high. When he was the wiseacre from SNL doing comedies like Stripes and Meatballs, who’d have thought that Bill Murray would become one of the best dramatic actors in America? He has done just that however, and he damn near steals the movie, his expressive face showing puzzlement, sorrow and pain when informed of the intended fate of the art. He also has a scene where he gets a Christmas message from his wife and granddaughter that Preston plays over the camp’s Public Address system in which you watch his loneliness and pain come bleeding out – without him changing his expression hardly at all. It’s masterful work.

Sadly, most of the rest of the cast gets little in the way of any sort of background and they seem a little cookie-cutter to me, although the impressive cast does their best to breathe life into them. Blanchett is a great actress but perhaps there could have been a great French actress – a Julie Delpy, a Marion Cotillard, a Juliette Binoche or a Ludivine Sagnier – cast instead. At least we wouldn’t have been as distracted by a French accent that seems more Looney Tunes than authentic.

The film raises the question as to what the importance of art is to a society and of course the answer is “essential.” Art is the soul of any civilization; should that soul be destroyed, so too is the civilization and that was the evil of Hitler; he didn’t only want to wipe the Jews from the face of the Earth, he wanted to wipe European civilization out as well and substitute his own warped version of it. Not everyone in the film agrees with Frank Stokes’ assessment of the importance of the mission of the Monuments Men (heck you might even disagree) but even if you do, the movie is surprisingly entertaining although in the interest of fair and truthful reporting, I slept through about 15 minutes of it early on.

This is the kind of movie they used to make when the War itself was either in full force or had just ended. While it lacks the snappy moxie that directors like Howard Hawks and Preston Sturges imbued in their films, it captures much of the same spirit nonetheless.  It’s kind of refreshing to be able to say in this instance, “they do make ’em like that anymore!”

REASONS TO GO: Compelling story. Murray is amazing here and Goodman and Dujardin not far behind.

REASONS TO STAY: Can’t decide whether to be a drama or a comedy and misses the mark for both.