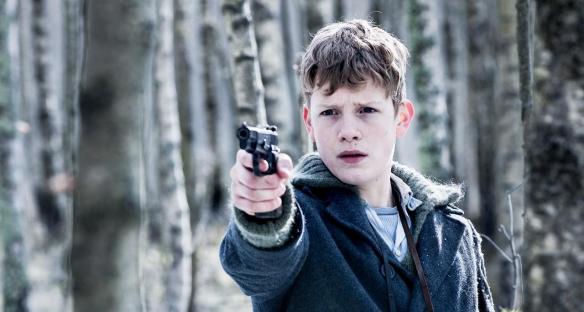 What could be more depressing about the state of humanity than a child with a gun?

That war is hell is a given. For youngsters however war is a special kind of hell, the kind that can render childhood terminated and sometimes life itself terminated as well.

Michiel (Lakemeier) lives in a small Dutch village in 1945 as the war is drawing to a close. His father Johan (Thiry), the mayor, is hoping that they can all ride out the German withdrawal from their village as safely as is possible. While they remain he does his best to keep the Germans happy as possible – not as a collaborator mind you but more of an appeaser.

His brother and Michiel’s uncle Ben (van Wageningen) is different. He’s a resistance fighter, combating the Nazis at every opportunity. To Michiel, his uncle Ben is a hero and his father, he increasingly suspects, is a coward.

This deteriorating situation within the family is thrown into chaos when a British RAF pilot named Jack (Bower) crashes near the village. His leg badly mangled, he is hidden by the resistance after killing a German soldier who had discovered the crash. When the resistance fighters protecting him are wiped out, it falls upon Michiel to protect the pilot. He brings in his sister Erika (Klaver) to help with Jack’s wounded leg – Erika’s a nurse. It doesn’t take long for Erika to fall in love with the dashing young pilot. Still, it is a cat and mouse game between the Nazis and Michiel whose family will be tested by Michiel’s actions. Not all of those closest to him will pass that test.

Based on a novel by Dutch writer/politician/scientist Jan Terlouw who in turn based the novel on his own experiences during the Second World War, Winter in Wartime is a bit rote when it comes to war movies. Films like Defiance, The Boy with the Striped Pajamas and Aftermath all explore the various aspects of the war explored here, from living in an occupied town to how children dealt with the experiences. The Dutch have turned to the war as a subject (or at least a backdrop) regularly in films like Soldier of Orange to Black Book.

Lakemeier does a very credible job as the 13-year-old Michiel. He is a child growing much more rapidly into a man than he should have to. By film’s end Michiel is certainly no longer a child and young Lakemeier makes that transformation believable. Van Wageningen does heroic quite well while Thiry keeps you guessing as to his character’s loyalties.

I can’t help but think that this could have used a bit less Hollywood and a bit more Amsterdam. This feels like a kind of rote studio film in many places and while the cinematography captures the beauty of snow-swept vistas and towns layered in the white powder, it still feels a bit predictable. It must also be said that Koolhoven does a fine job at maintaining the level of suspense, particularly in the latter half of the film.

This is basically a well-made movie and I can recommend it pretty much to everyone although with the caveat that you will have seen this before in many ways. Lakemeier’s performance however is something you haven’t seen and for that alone you can put this on your list of movies to check out.

WHY RENT THIS: Terrific performance by Lakemeier. Suspenseful when it needs to be.

WHY RENT SOMETHING ELSE: A little predictable.

FAMILY VALUES: There is some rough language and a bit of wartime violence as well as some adult themes.

TRIVIAL PURSUIT: Much of the movie was filmed in Lithuania due to the absence of snow in the Netherlands during filming.

NEXT: The Grand Budapest Hotel