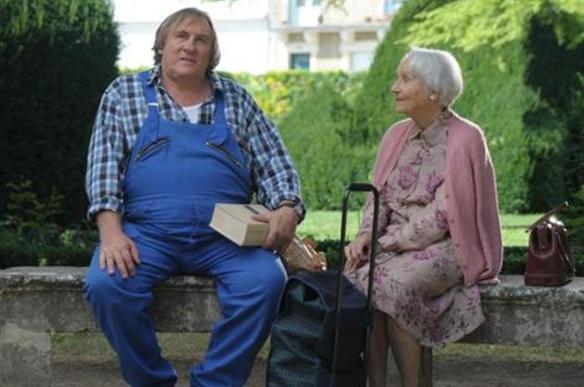 A sunny afternoon in a park in a small French village is c’est magnifique!

You can never tell who will come into your life and change it forever. Sometimes it’s someone you’d expect – a teacher, a preacher, a parent, a lover – but sometimes it is quite someone else entirely.

Germain (Depardieu) is a middle-aged mostly illiterate handyman living in a small, bucolic French village. He lives in a trailer next to his mother (Maurier) who is showing signs of Alzheimer’s and isn’t well. When she was a young woman (Le Guernec) she was an absolute terror. Germain had been the result of an accidental pregnancy and Mommy dearest made sure that Germain knew at every possible turn that she never wanted him. In fact, she never refers to Germain by name or even as a he – to his mom, Germain is an “it.”

You would think that would make Germain a bitter, mean man but he has proven to be stronger. His is a gentle soul, and most people like him personally – although plenty make fun of him behind his back. He has a beautiful young girlfriend, Annette (Guillermin) who drives the local bus and he sells vegetables from his garden. Between that and his handyman work he squeaks by but in a village like this, life – even just squeaking by – is good.

One afternoon as he sits on a park bench to eat his lunch, he meets by chance Margueritte (Casadesus). She is everything he is not; worldly, well-read, intelligent and tiny. At 95 years old, she is still full of life and joy. They pass a pleasant conversation and Margueritte begins reading The Plague by the existentialist philosopher Albert Camus. Germain finds himself falling for the power of the words and Margueritte lends him a dictionary to help him learn to read.

That goes very poorly as Germain quickly realizes that he is slogging through mud and feeling humiliated, gives up quickly. However, as it turns out, Margueritte has macular degeneration and won’t be able to read much longer. To be separated from books – now that is a living hell as far as Margueritte is concerned. Germain determines to finally learn how to read once and for all – not for himself but for his new friend.

Becker, a second-generation filmmaker, is extraordinary in his brevity. There are no wasted scenes, no unnecessary shots. Vis a vis the story, he simply gets on with it, displaying the salient points and when the story is over, so is the film. There are plenty of filmmakers who can learn from his technique including some who have won Oscars.

Much has been made of Depardieu’s weight in the movie and the “unlikelihood” of a beautiful young woman like Annette falling in love with him and maintaining a romantic and sexual relationship with him. Critics who have written such things need to be given a year off from their jobs so they can actually live in the real world – people fall for people regardless of how they look or weigh. It is only shallow people to whom looks are important and those are generally the people who complain they can’t find anyone to stick around.

This isn’t a movie that bowls you over. Rather, it is one you fall in love with slowly, gradually, until by the end credits you realize that you feel genuine affection for the film. Depardieu has a lot to do with that. One of the world’s best actors in his heyday and still as engaging as he ever was, he imbues the soul of Germain with a kind of sweetness so genuine it is hard not to like the oaf. His chemistry with Casadesus is also genuine which is a relief because the movie revolves around it; in fact, must have that chemistry in order to succeed. Not to worry; you don’t for a second doubt that they have become deep, close friends.

Some people may find the comedy too subtle and low-key and I can understand that. This is going to appeal more to people who have more of a European sensibility and perspective than American; you will either like this or not depending on your tolerance for subtlety. It may not be loud enough for you, but those who prefer movies that don’t have to shout will be drawn to this like moths to a warm, comforting flame.

WHY RENT THIS: The chemistry between Depardieu and Casadesus is delightful. Very charming and sweet.
WHY RENT SOMETHING ELSE: May be too low-key for some.
FAMILY VALUES: Occasional foul language, a few sexual references and some adult themes.
TRIVIAL PURSUIT: Although uncredited as such on the final print, Depardieu served as executive producer for the film.
NOTABLE DVD EXTRAS: None listed.
BOX OFFICE PERFORMANCE: $14.3M on an unreported production budget.
COMPARISON SHOPPING: The Best Exotic Marigold Hotel
FINAL RATING: 7.5/10
NEXT: Offshoring 2014 concludes!