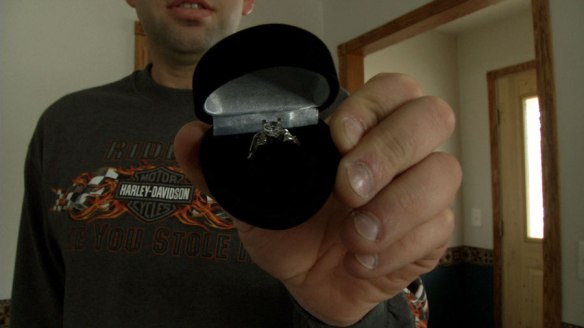 Mail order brides have been a business since the 19th century as lonely farmers, mostly in North America, brought over women from mostly Europe. Often there was limited correspondence between the prospective groom and the object of his purchase and generally the transaction (for make no mistake – this was a business deal) was consummated before the buyer had even seen his bride-to-be. The trade expanded in the 20th century to Asia and Africa as lonely American men tried to find alternative ways to discover happiness.

The business still exists today although it is much more refined and in some ways, more high tech. Websites have sprung up on which prospective brides can put their pictures up and correspond via e-mail with their prospective husbands at their leisure. Businesses like A Foreign Affair (which gets the lion’s share of screen time here) have created the ultimate singles bar which is always open.

We follow the journeys of five clients of AFA and one of an Australian service. called Elena’s Models (run by a former Russian mail order bride herself) to the Ukraine to find potential brides. All of the men go with high hopes, some with specific women in mind to meet and hopefully develop a relationship with. The women are all uniformly beautiful; the often seductive client photos all turn out to be legitimate, which was a worry I would have had were I to be in a situation like this – that someone you corresponded with had put up a picture of a model or an actress and was not representing herself honestly.

But of course there are all sorts of ways to represent oneself honesty. Some of the women portrayed here are genuinely eager to find love, but at least one or two were essentially in it to milk as much money as they possibly could out of their American “sugar daddies.” This isn’t a cheap process by the way; if you don’t have the wherewithal to plunk down tens of thousands of dollars, this isn’t a process you should probably undertake although, as one client shrugs, what’s happiness worth? AFA arranges group trips to the Ukraine to facilitate face-to-face meetings between clients and prospective brides. While these trips are optional, they are recommended. All five of our AFA clients are going on a winter trip chaperoned by the head of AFA himself, John Adams who married a Russian woman through a marriage broker service.

The men have varying experiences. Ron, a North Carolina divorcee with grown children, finds that this isn’t the right fit for him and winds up dating a local woman after returning from the Ukraine. The other four men have relationships of varying success with women they either met online through AFA or on the trip. One actually gets married (and delivers one of the steamiest kisses you’ll ever see in a documentary), while the others fizzle out more or less. The expectations of some of the men are unreasonable, while others are less disappointed.

The most heartbreaking story is that of Michael, the lone Australian client. He meets and falls in love with a Ukrainian woman who has a young daughter. Michael bonds with both of them. He even marries the girl of his dreams, then goes back to Australia while she returns to the Ukraine. She stops communicating with him and finally he is forced to go back to the Ukraine to confront her. We discover that she never really had any feelings for him but kept stringing him along to “keep her options open.” It’s plain to see that she is not a very nice woman.

That doesn’t mean that the others aren’t. There are 87 men in the Ukraine for every 100 women and even the most beautiful and desirable women there can have trouble finding a good man, especially when you consider that there is an epidemic of alcoholism among Ukrainian men.

There is a good deal of self-delusion that goes on. It is clear that in some cases there is something wrong but the men tend to ignore the very obvious signs. I think most men are pretty much boneheads about women but I think lonely men can desperately cling to the most tenuous of threads, hoping for a tapestry. It certainly serves as a cautionary tale for any single man looking for something permanent, particularly men 40 and older.

Narducci does an excellent job of impartiality; he lets the stories tell themselves and allows both sides of the coin to be expressed. If there is any glaring issue with the movie it’s that there are too many coins. I wonder if we needed six different subjects, although upon reflection I’m not sure which story I’d eliminate. All of the experiences here are distinct from each other. Still, that means the story drags in places and jumps abruptly from one view to another. Also, with an Elena, Inna and Svitlana coming at you, the names of the women are pretty similar and sometimes I found myself the attractive blondes with one another.

Matters of the heart can be tricky and the documentary captures a view of it from a familiar but completely different viewpoint. Most of us will never use a service like A Foreign Affair but for those who do it can literally be a godsend and it serves a unique but necessary purpose. The movie captures how prevalent loneliness is in our society and while that’s not exactly new information it is nonetheless one thing to know about it intellectually than to stare in the faces of these lonely men – and women – who still carry enough hope in them to try something new. You’ve gotta admire that.

REASONS TO GO: Never judges the industry or the individuals. Shows both sides of the story. Occasionally heartbreaking.

REASONS TO STAY: Drags a little bit in places. Maybe tries to follow too many stories at once?

FAMILY VALUES: There is some mild profanity and sensuality.

TRIVIAL PURSUIT: Made its world premiere at the Florida Film Festival.

NEXT: The Quiet Ones