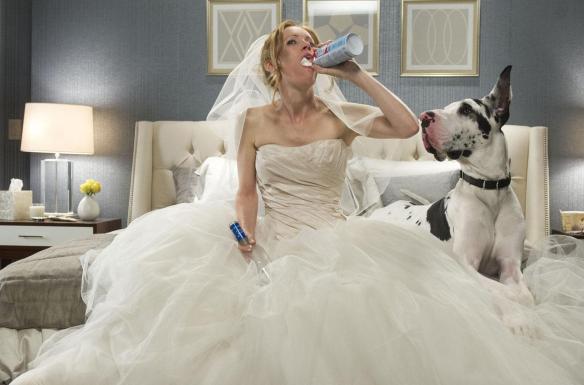 Leslie Mann knows how to binge.

Infidelity is one of the most notorious deal-killers in any marriage. For many, it is the most unpardonable of marital crimes ranking just below physical abuse. While it isn’t the most common cause of divorce, it is right up there. Different people react to infidelity in different ways . Some are forgive and forgive sorts. For others, it’s not about getting mad so much as getting even.

Carly Whitten (Diaz) may well just have it all. Beautiful, smart, successful, she’s a lawyer at a high-power New York corporate law firm. She has a gorgeous apartment. Most importantly, she has a male model-handsome Mark King (Coster-Waldau), her new boyfriend who dotes on her and gives her the most amazing sex ever. He’s willing to meet her irascible dad (Johnson) and as she tells her self-centered assistant Lydia (Minaj), she’s cleared all her other guy friends off the bench. He may well be the One.

Then when he has to break his date to meet her dad because of some plumbing catastrophe at his Connecticut home, Carly is pissed off. Taking her dad’s advice to go and see him in Connecticut, she dresses up like a hooker plumber. The woman who answers the door however, is not Mark’s housekeeper; she’s his wife Kate (Mann).

Hurt and humiliated that she didn’t pick up on the clues that her shining knight was already taken, Carly wants nothing at all to do with Mark. In a strange twist however, Kate befriends Carly. Kate has been isolated and marginalized. She literally has nobody to talk to; all her friends are Mark’s friends she wails, and “they’ll blab!” Carly is at first repulsed but grows strangely drawn to the fragile and clingy Kate. Eventually they become friends, although never without the occasional brawl.

They soon discover that Mark has been a very bad boy. Not only is he cheating on them with Amber (Upton), a beautiful but none-too-bright model sort but he’s been skimming money from his firm. He’s also put Kate in the position to take the fall if he’s ever discovered. The three women decide to team p to teach Mark a lesson he’ll never forget and when you put brains (Carly the lawyer), bitch (Kate the wife) and boobs (Amber the…hey, my eyes are up here!) together, there isn’t a man alive who can withstand the combination.

On the plus side, I’m pleased to see a movie in which the female leads are formidable, strong and confident for the most part. On the negative side, there is a lot of stereotyping going on here; the strong women are vindictive and bitchy, the man a serial cheater and liar. The ladies feed poor Mark enough laxative to make him crap his pants, lace his protein shake with female hormones so intensely that he starts growing man boobs and put hair removal cream into his shampoo until he begins losing hair. It’s almost enough to make one feel sorry for the guy who definitely doesn’t deserve any sympathy.

In fact, the pants pooping incident is only one of two major fecal gags in the film. Now, I like a good poop joke as much as the next person but I think considering the subject matter it’s a bit disrespectful to the ladies who are doing their best to make this an adult comedy. Stuff like that doesn’t really go along with the theme of smart women taking their revenge against a douchebag who deserves it.

Diaz has become one of Hollywood’s most versatile actresses, equally at home in heartrending dramas (My Sister’s Keeper, Gangs of New York) or in comedies both dark and light (Bad Teacher, There’s Something About Mary). Here she plays smart, sexy and a little bit hard-edged but then Diaz has never been the softest, most feminine actress out there. She often uses her attractiveness as a weapon, a means of saying “See this? You can’t have it!” in a very subtle way. I’ve never warmed to her as much as admired her and her work here leads me to believe that she’s only going to get better as she moves into a new phase of life and career.

It’s not a revelation but Leslie Mann steals the movie for my money. Long known more for being a supporting player and Judd Apatow’s wife, she’s always shown a great deal of talent in the too-brief glimpses we get of her onscreen. Here she finally shows that she is absolutely capable of being one of the top comic actresses in Hollywood, adept at both physical humor and delivering zingers. She also shows a very appealing vulnerability as she allows Carly (and the audience) to see just how deep the wounds cut.

Unfortunately, the humor is a bit uneven. The movie is bipolar when it comes to comedy – when they get it right, they nail it but when they miss it’s crickets bad. And while I complain about some of the really venal things the women do, I have to admit I did laugh so in that regard mission accomplished. I did feel bad about laughing though and still I have to point out that I think the world is ready for a movie in which female leads don’t have to resort to scatological jokes and ultra-bitchiness to prove they’re strong.

REASONS TO STAY: Gets a little muddled. Perpetuates stereotypes. Not all the comedy succeeds. Too much poop humor.

FAMILY VALUES: There are plenty of sexual references and some foul language, along with mature thematic content.

TRIVIAL PURSUIT: This is the first film to be released internationally by 21st Century Fox, one of two companies formed by the split of Rupert Murdoch’s News Corporation. The new company continues to own 20th Century Fox film studios and the Fox Network, among other assets.

NEXT: The Final Member