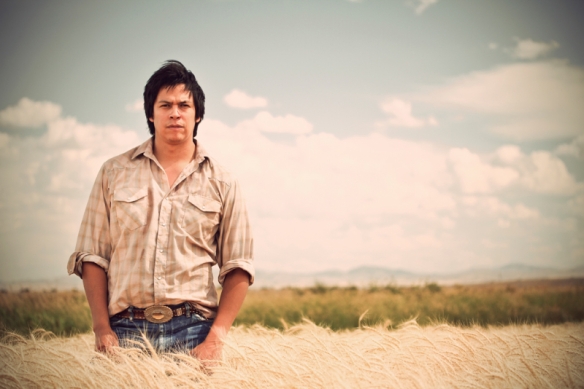 Chaske Spencer gazes out over the infinite prairie.

When it comes to the Native population, America has a lot to answer for. In attempting to obliterate their culture and drive them into squalid reservations, we have demoralized and demonized an entire people, yet they have endured. It hasn’t always been easy.

In the Fort Belknap reservation in northern Montana in the late ’60s/early ’70s, Virgil First Raise (Spencer) awakens from a drunken stupor to find out that his wife Agnes (Jones) has left him and taken his prized rifle, one of the last remaining gifts from his late father (Whitman) who died when Virgil was a boy, passed out in a ditch in the freezing cold.

That and the death of his older brother Mose (Hawley) have haunted Virgil throughout his life. As he goes to town to retrieve not his wife so much but his beloved rifle, he encounters the Airplane Man (Morse), a manic Canadian con artist who may or may not be real. He is being chased by a couple of men in suits who don’t seem particularly interested in arresting him so much as trapping him.

Virgil seeks to stem the pain through alcohol and random sexual encounters. His mother (Camp-Horinek) is getting hitched to Lame Bull (Farmer) which Virgil isn’t too thrilled by. He doesn’t think too highly of Lame Bull although his potential stepfather seems to be a decent sort. Still, Virgil has his own demons to wrestle with and at present, they are handily beating him. Can he overcome his past and come to grips with his present?

Based on the novel by native writer James Welch, this is a sobering and unflinching look at the results of our native American policies and how they have turned a proud people into a group without hope. The northern Montana landscape (where the novel is set and where this was filmed) is sometimes bleak but has a beauty all its own.

Spencer, best known as Sam Uley the leader of the werewolf gang in the Twilight franchise, is crazy good here. Virgil is basically a decent sort who wants to get his life together but just can’t get past the pains and traumas of his past. His mother and an elderly friend to his father named Yellow Calf (Grant) that he visits from time to time both understand him more than he understands himself, and there are those who would give him surcease but at this point in his life he just wants numbness. It’s a heart-rending and incendiary performance.

The rest of the cast also does well including a nearly unrecognizable David Morse but this is Spencer’s show. Because much of the movie takes place in a kind of surreal manner (Welch is well-known for having mystical elements in his stories), there is a sense of unreality to the proceedings. While that isn’t a bad thing of itself, the lines are often blurred and the movie comes off in places like a lost episode of Twin Peaks which also isn’t a bad thing of itself. However, some filmgoers might find that unsettling. Personally I wish the movie were a little more seamless in that regard.

I found myself completely immersed in the film, with a splendid soundtrack framing the action nicely and a timeless quality (I was surprised to find out the movie was set nearly 40 years ago after I had already seen it – look carefully and you’ll notice the truth of it) that made me feel that things have not changed so much for the Native American so much as plateaued. This isn’t always an easy movie to watch but it is a movie well worth the effort to go see it.

REASONS TO STAY: Disjointed in places. Hunter S. Thompson-surreal atmosphere might be off-putting for some.

FAMILY VALUES: Some foul language, some sexuality, a little violence and some depiction of drunken behavior.

TRIVIAL PURSUIT: The soundtrack was provided by the Austin-based country blues-rock band the Heartless Bastards.

COMPARISON SHOPPING: A River Runs Through It