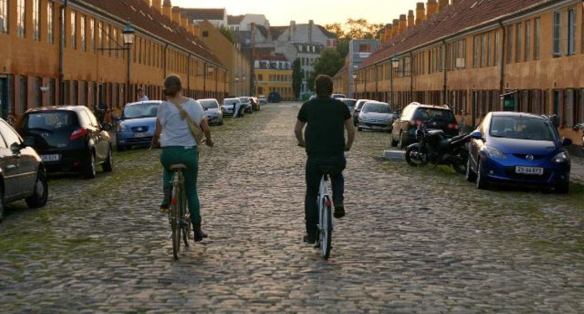 Riding off into the sunset, 21st century Europe-style.

Travel allows us to see new places and gain new perspectives. It also allows us to completely be ourselves – or completely reinvent ourselves. Then again, what we do depends on what we’re travelling for.

William (Anthony) is a thoroughly unpleasant sort. 28 years old, he is only interested in getting laid, getting drunk and doing what he wants when he wants. He respects nobody and likes nobody except for maybe his friend Jeremy (Armesto) whom he’s travelling with, along with Jeremy’s girlfriend Jennifer (Grant) whom William thoroughly dislikes and quite frankly, doesn’t want her around on this trip that was just supposed to be him and Jeremy.

They’re in Copenhagen and it’s not by accident nor is it for the tourist attractions. William needs to find his grandfather to give him a letter that his late father wrote and asked William to give to him if he ever made it out there. Finding granddad will be a problem, especially when Jennifer, tired of the abuse, finally bails and takes Jeremy with her, much to William’s disgust.

Fortunately, an employee at the hotel – Effy (Hansen) – is willing to help and even though William is rude to her initially, he realizes that he needs her to translate (he doesn’t speak a word of Danish) and help him navigate the city to find his grandfather.

But all work makes William a dull boy and Effy takes him out on a number of adventures in Denmark. William is beginning to fall for the free-spirited girl and Effy clearly feels a strong attraction towards him. The brakes are put on though when William discovers that she’s just 14 years old. A mature 14 but 14 nonetheless. That’s a no-no even in Europe.

This is Canadian-born Mark Raso’s first feature and he shows a good deal of promise. This was one of those rare films that you can’t really predict what’s going to happen next. That’s a by-product of really good writing (also Raso) as well as confident directing. Yeah, there are parts of this that are really dark but there are some really funny moments as well.

Raso filmed this in Copenhagen with a mostly Danish crew and he does a great job of really giving us a sense of the city, not just of the tourist areas although there’s a really lovely scene filmed late at night at the iconic Little Mermaid statue in the harbor. We get a sense of the daily life of the people who live there and a sense of their values, their lifestyles and their sense of humor. I’m not sure if Raso spent much time in Copenhagen but clearly what time he did spend there he used wisely; he’s clearly a keen observer. His cinematographer, Alan Poon, clearly is as well – we get some really gorgeous and unique views of the city and environs.

Hansen is a real find. Although playing a 14-year-old, she was 19 years old at the time of filming and she captures the mindset of a 14-year-old girl nicely, albeit one wise and mature beyond her years. As the film goes on, we discover that Effy has some issues as well and we get to see the layers of her personality gradually revealed. While some of that is clever direction on Raso’s part, it is mostly just Hansen doing a bang-up job.

Anthony has a more thankless role with William, a guy that you’ll be convinced after ten minutes that this is a guy who must get punched in the face regularly. Even though he’s pretty good looking, it’s impossible to imagine that he could get laid regularly, as portrayed here. I can’t imagine that a woman would want to spend long enough with him to get her clothes off, but that’s just my take. Women do make some strange choices in bed partners sometimes and William can be charming when he needs to be, but that charm rarely lasts long. It’s to Anthony’s credit that he never tries to make William sympathetic; even when he’s starting to soften up and let Effy in, William is still a massive prick.

What makes this movie even more memorable is the dynamic between Effy and William. Quite frankly, some are going to be uncomfortable with it and even I have to admit to a couple of moments of squirming in my seat but all in all it is handled quite well and with a great deal of sensitivity. That doesn’t mean we don’t soon realize that these are two people who are really good for each other. Both of them have dysfunctional families bordering on the psychotic in places, although William does take home the prize in that department.

There’s no doubt in my mind that Raso views the city with a great deal of affection and we do at the same time get an insider’s perspective as well as an outsider’s. That’s unique and invaluable and I wound up leaving the film feeling I knew the city of Copenhagen just a little bit better, but this is no travelogue. The real reason for seeing this movie is for the compelling relationship between Effy and William and the dynamic performances of the actors who play them.

REASONS TO GO: Keeps the viewer guessing. Fine performance by Hansen who has some serious star quality.

REASONS TO STAY: Relationship between Effy and William may make some uncomfortable. William can be a truly unpleasant jerk to spend time with.

TRIVIAL PURSUIT: Anthony is best-known for his role as Renly Baratheon in the hit HBO series Game of Thrones.