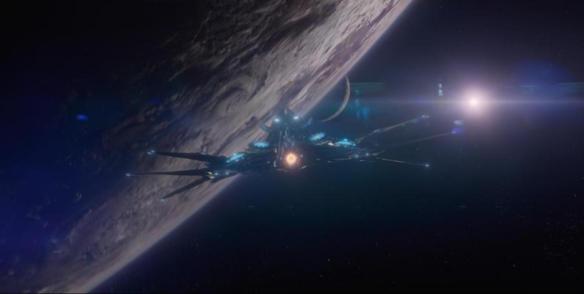 GUARDIANS OF THE GALAXY

Peter Quill, a human adventurer in the far reaches of the galaxy – okay, maybe thief is a better word – acquires a strange and mysterious orb. What he doesn’t know is that the persistent and enigmatic Ronan the Accuser covets that item. What he also doesn’t know is that the orb possesses terrifying power. When the chickens come to roost – not that there are chickens in the far reaches of the galaxy – it will be up to Quill and a ragtag group of bickering teammates to keep that orb out of the hands of Ronan if the galaxy is to remain safe.

Rating: PG-13 (for intense sequences of sci-fi violence and action, and for some language)

(IFC) Patricia Arquette, Ellar Coltrane, Lorelei Linklater, Ethan Hawke. Richard Linklater’s acclaimed new film is already on track to appear on an awful lot of top ten lists at the end of the year. Linklater filmed the same actors portraying a family, particularly through the point of view of the son, over a twelve year period. The rocks and shoals of growing up are told with a soundtrack that keeps pace with the boy’s tastes in music year after year.

Rating: R (for language including sexual references, and for teen drug and alcohol use)

(Universal) Chadwick Boseman, Viola Davis, Octavia Spencer, Dan Aykroyd. The story of James Brown, who rose from impoverished conditions, abandoned by his own mother to become the Godfather of Soul. Brown is one of the most influential figures in the history of music but is often relegated to a less important status behind white artists, many of who themselves were influenced by Brown. In other words, it’s about damn time.

Rating: PG-13 (for sexual content, drug use, some strong language and violent situations)

Living is Easy With Eyes Closed

(Outsider) Javier Camara, Natalia de Molina, Francesc Colomer, Ramon Fontsere. Based on actual events, an English teacher in Spain who is obsessed with his hero, John Lennon, decides to take a road trip to Almeria in hopes of meeting his idol who is making a film there. Along the way, he picks up a couple of runaways and together the three will find a deeper meaning in their journey than they were expecting.